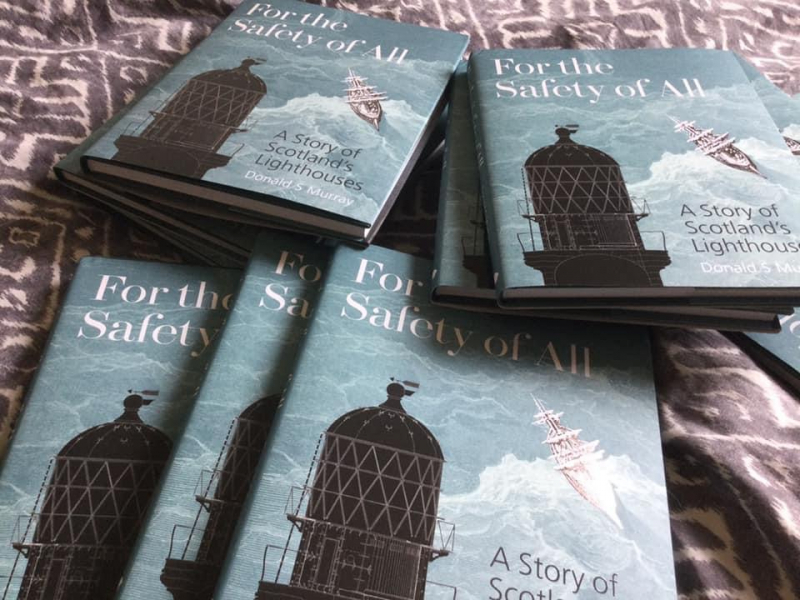 For The Safety of All, published by Historic Environment Scotland, is priced at £25 and was due to be published last October and - later - March, then May. However, its arrival was delayed by COVID and its consequences on staff and even Brexit side-effects over the last few weeks.

As the delays continued, the book has been widely reviewed in advance in national and regional newspapers.  Alison Campsie in the Scotsman wrote: "Author Donald S Murray has written with affection on Scotland’s lighthouses in his new book, For The Safety of All, and pays tribute to the powerful place they fill in both our history and our imaginations.  Respect is given not only to the visionaries who built these “distant miracles” but the lighthouse keepers who sacrificed their own lives to keep the lamps burning, often inhabiting claustrophobic spaces from where there was nowhere left to run.

Donald told her about an early visit to the Butt of Lewis lighthouse: “I remember going up to the gallery in my socks and sandals and I realised, standing there, there was this entirely different perspective on things. I felt semi-regal. Instead of always looking up at things, here I was looking down. I could see Dell Rock, I could see the pattern of the lazy beds. It was magical."

Donald was born and raised in Ness. An award-winning author, writer, poet, and playwright, he has written numerous books in different genres and published countless essays, columns, short stories, and poems. After 30 years as an English teacher and head of department, including major stints at The Nicolson Institute and Sgoil Lionacleit, Donald, who now lives and works in Shetland, became a full-time writer a decade ago.

Recently he has joined the Committee of SoAiS, the Society of Authors in Scotland, for the 2020-2023 period, to help amplify the voices of writers based in the Highlands and Islands.  The society provides support at all stages of their careers, and has been advising individuals and speaking in support of the rights of the profession for over 100 years. SoAiS is a nation group within the UK-wide Society of Authors, and all members with a Scottish postcode are added to it when they join.

“I joined the committee around a year ago because I was conscious that those writers living in locations like the Highlands and Islands needed to have our voices heard in organisations like these,” says Donald. “Too often they are dominated by those who live in the Central Belt and other urban areas. Oddly the pandemic with its Zoom-type meetings offers us all an opportunity to redress this historical imbalance.