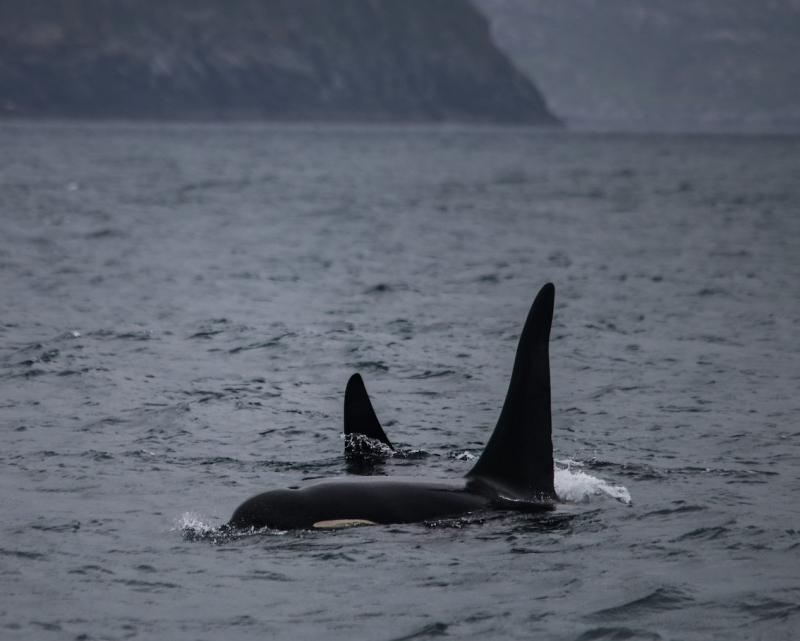 What is believed to be the first match of killer whales between Scotland and Norway has been made after experts identified three individuals photographed in southern Norway this month as part of a ‘mystery pod’ seen off Scotland’s west coast in 2018.

The discovery solves a three-year enigma after the Hebridean Whale and Dolphin Trust made the last known sighting of the pod – never before seen in Scottish waters – off Vatersay on Scotland’s west coast on 23 June 2018.

The breakthrough came on 10 July this year, after citizen scientist Asmund Aasheim photographed a pod of six whales in Børøyfjorden and sent his pictures to the Norwegian Orca Survey, where Dr Eve Jourdain found that the killer whales were not familiar from Norwegian records.

As the colouration on the animal’s backs – known as a saddle patch – looked different to that of killer whales normally seen around Norway, Dr. Jourdain looked further afield – comparing the individuals against other national records. She found a match in the Scottish Killer Whale Catalogue – a key research document containing the best available images of all known living killer whales seen in Scottish waters.

“From the moment I first took a look at Asmud’s photos, I knew these killer whales were “different” from our Norwegian killer whales,” said Dr Jourdain.

Researchers at the Hebridean Whale and Dolphin Trust and the authors of the Scottish Killer Whale Catalogue subsequently confirmed that three of the killer whales in the Norwegian encounter were specific individuals known from the Scottish Catalogue.

The only previous confirmed sighting of this killer whale pod had been made by the Hebridean Whale and Dolphin Trust in 2018, when the spectacular animals were spotted just 300 metres away from the charity’s research yacht, Silurian. The Trust’s Science Officer Becky Dudley was on board and captured the photographs that – three years later –  made the Norwegian match possible.

“The encounter with this group of killer whales back in 2018 was one of the most amazing experiences I’ve had on Scotland’s west coast. It was made even more exciting when – despite much investigation and collaboration with other organisations – the identity of this pod remained a mystery. I am thrilled that the group has been matched to the group seen in Norway over three years later. It highlights how much there is to learn about the marine life in our oceans.”

Dr Lauren Hartny-Mills, Science and Conservation Manager at the Hebridean Whale and Dolphin Trust said: “This latest sighting really highlights how crucial citizen science is to help us monitor the movements of highly mobile and wide-ranging animals such as whales and dolphins, and demonstrates the need for long-term monitoring.

“We still have so much to learn about whale movements, and it’s fascinating to be able to add another important piece to the puzzle. Through working with citizen scientists and by collaborating with colleagues from Scotland, Norway and beyond, we really hope to learn more about this group.”

Photo-identification is a widely used, non-intrusive research method which allows researchers to identify individual whales from natural markings or features on their bodies. Such images are catalogued and over time build an important long-term picture about whale movements ­– helping scientists to assess the movements and health of specific individuals. These insights are vital for informing suitable conservation measures.

With marine mammals at risk from human activities including climate change, entanglement, pollution, underwater noise and habitat degradation, ongoing and long-term research is crucial to improve understanding of the impacts on whales, dolphins and porpoises – collectively known as cetaceans – and how to protect them.

Anyone can get involved to help track the movements of individual animals and contribute to marine conservation efforts by sending in sightings and photographs of whales, dolphins, porpoises and basking sharks. For Norway report to Norwegian Orca Survey via norwegianorca-id.com and for the west coast of Scotland to the Hebridean Whale and Dolphin Trust via www.whaletrack.hwdt.org.