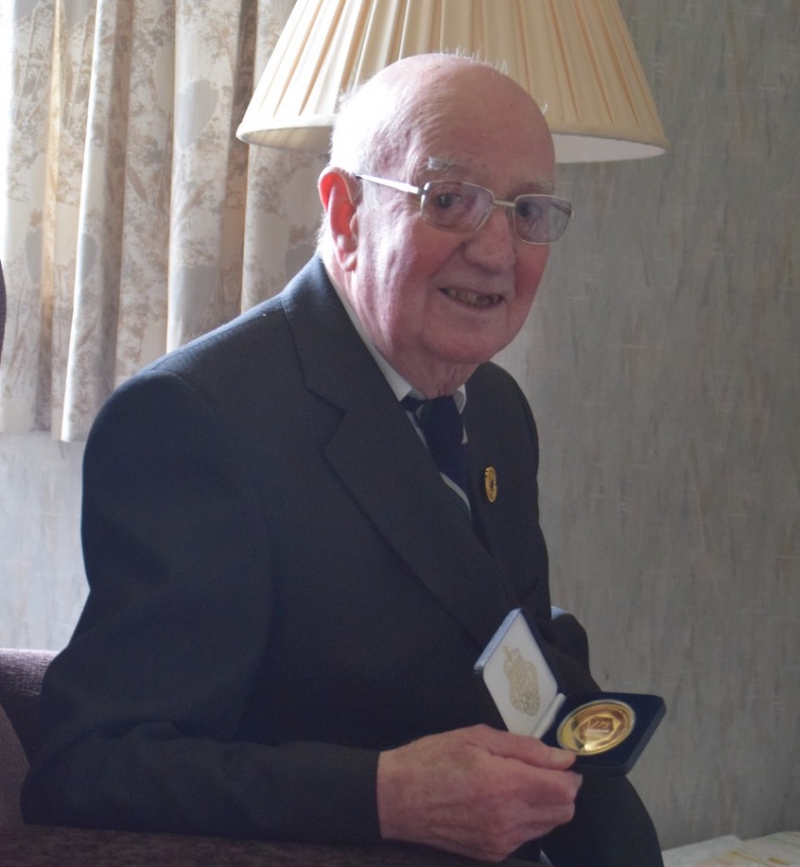 A variety of people have paid tribute since the community was saddened to hear, in early June, that Kenny Nicolson had died.

Kenny, who stayed at Macaulay Road, was a Founding Member of the Isle of Lewis Probus Club and served as Secretary for its first seven years.

There are records of him giving two talks to the Probus Club – one in August 1991 “Money Market and BCCI” and the other in February 1993 on “Wartime Service – Breaking German Codes” – which hint at varied aspects of his long life.

He was a regular and enthusiastic attender of Probus Club meetings and accepted Honorary Membership of the Club in 2015.  His contribution to the Club was immense and will always be remembered, they say.

Born in Stornoway in 1925 Kenneth Nicolson was raised in a typically Lewis family. His mother, Chrissie, had been a herring girl working the East Coast from Wick to Great Yarmouth. His father, Angus, worked at Stornoway Harbour and was the first to raise the alarm over the loss of HMY Iolaire on January 1, 1919. Angus had been invalided out of the Army after being gassed during the Western Front battles on the Somme, dying in agony from the after-effects in 1933. 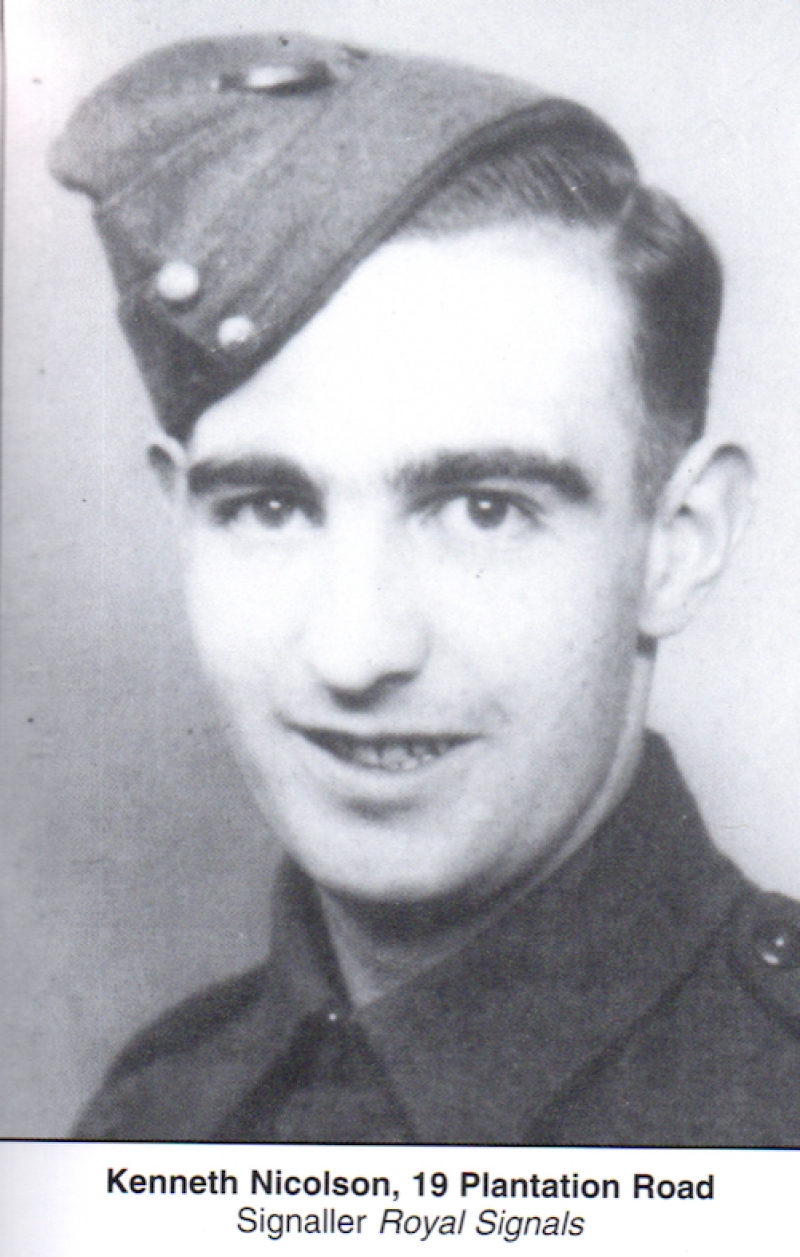 In May 1944, aged 19, as a telegraph operator with Stornoway Post Office, Kenny was headhunted into the Army Signals division and sent straight to advanced training at the headquarters of the Radio Security Service.  His first trip off island took him from Stornoway to Arkley, North London.  As part of MI6, he was trained to send and receive
highly secure transmissions to and from the top-secret Bletchley Park, passing decoded incoming messages to MI6 senior officers.  Bletchley Park was the principal centre of codebreaking during the Second World War against the Nazis.  These officers determined, on a need-to-know basis, what was passed on to military units. He described later being a small cog in a second hidden chain of command where Intelligence officers had the power to veto the flow of military intelligence between army units.

Much of his time was spent in Forfar where he joked that the only fighting which he was involved in was in bars on a Saturday night. His unit was redeployed to Egypt in 1946, but he talked obtusely in later years about an undocumented period in Southern France establishing secret listening stations or following the Front Line as part of a comms team as the army moved north.  This was part of a follow-up to the D-Day invasion of occupied France called Operation Anvil which began on August 15, 1944.

After being demobbed in December 1946 he changed career and entered local government in Stornoway starting as a rent collector.  He taught himself Public Law and Accountancy. He worked in the former Burgh Chamberlain’s (chief finance officer) office and was promoted to Assistant Burgh Chamberlain in 1956, before being appointed Burgh Chamberlain two years later. He remined in this post until the creation of Western Isles Islands Council / Comhairle nan Eilean in 1975. The Stornoway Gazette reporter – Zena Morrison from Balallan and Glasgow – who attended Council meetings at that time became Mrs Nicolson in 1962.

His greatest enjoyment was fishing. In the season, with a few close friends, he was away most weekends, always coming back with a big bag of trout or salmon to feed family and friends. One group of friends would take him fishing on the estates, as a guest of the proprietors. A second group would fish the very same lochs and rivers, with Zena dropping them off at dawn and collecting them and the salmon at dusk, telling tales of how they had evaded the keepers.

In 1968 at his instigation, in an effort to reduce the number of chimney fires in the Burgh, the Council introduced a charge to be levied every time the Fire Brigade were called out. This was to encourage greater care by householders and to part meet the costs of an improved fire service. Such “nudge” tactics are common now, but it was contentious at the time. Within two weeks of the policy being introduced, in true karmic fashion, the very first fine was levied by him on himself.

At one time (1969 0r 1970) he nearly became the only Burgh Chamberlain to have a 100% collection of rent for the year. But despite having faithfully promised to pay before the end of the accounting year one tenant paid his bill late on 1 April. Kenny often kicked himself that he had relied on the tenant and had not gone out to collect the money in person. Such a situation would be unimaginable now.

When work on local government reorganisation began in 1973, he helped recruit and appoint all the senior staff in the new Western Isles Islands Council, recalling tales of the cigarette smoke filled rooms as he and Fr. Calum MacLellan of Eriskay argued over appointments, both often having a (large) dram in hand as the night drew on. He was always warmly welcomed in South Uist and Barra for the work he did in tying these parts of  two county councils (Ross and Cromarty, and Inverness-shire)  into one island authority.

From the 1960s he was the Election Agent for the SNP candidate and later MP Donnald Stewart at every election.

Taking early retirement in 1990, he became a Sheriff.  Kenny often dispensed legal advice and guidance to miscreants ahead of upcoming Court appearances; most of which resulted in admonishment. It was around this time he stopped fishing. Salmon, however, continued to appear at the house, and Eishken venison was hung in the garage until butchered, bagged, and frozen. One Balallan worthy used to arrive at the house announcing that yet another beast had died peacefully on his doorstep one night last week.

In retirement Kenny and Zena travelled widely. They went on walking holidays across Europe, with the Pyrenees and Crete as particular favourites. They went to Japan to see their son Ken and his wife and her family where he continues the family tradition of working in cryptography (and in secrecy). Kenny sought out family members in Canada, the USA and Australia to make sure connections remained and that the family tree was documented.

When the Official Secrets Act was waived for Bletchley Park veterans, he became an early and active member of the Society, helping to record memories and raise funds to preserve the site. He won a specially designed unique Fabergé brooch (with hidden secrets) in the very first fund raising raffle: but even that remained confidential. Kenny, usually with Zena, made numerous visits to Bletchley Park, the last in 2016 accompanied by his son and grandson. He is commemorated on the Codebreakers Wall and leaves a huge collection of memorabilia and books about the secret - or undocumented - aspects of World War II.

Until 2019 he was still mobile, going into town a couple of times a week to get fresh food and more importantly to bump into old friends and hear the latest news and have a drink with friends of all ages.

On Saturday August 15, 2020, aged 95, Kenny was presented with the British Legion’s Victory 75 coin and letter of commendation by the Lord Lieutenant of the Western Isles, Donald Martin, and the secretary of the British Legion, Donnie Maciver, for his contribution to the Allied war effort during World War II.

Speaking to the presentation party, Kenny said he could not speak about what he had done during the war – or if he did, he would have to kill them.

The presentation was a replacement event for what was due to be a full ceremonial occasion in Edinburgh in May last year, as Donnie Maciver explained. He said: “The British Legion asked late last year if we had a veteran able to travel to Edinburgh for VE day, where Kenny was due to be treated to three nights in a hotel, wined and dined and to participate in a parade.  All that went by the board due to Covid-19, but we recently learned there was to be a presentation of a commemorative coin and letter and we arranged for that presentation to take place here in Stornoway.”

Lord Lieutenant Donald Martin, who presented Kenny with his award, said Kenny had “a most distinguished record of service during the Second World War, serving with the Royal Signals Security Service, stationed at Bletchley Park, where he is commemorated on the Code Breakers’ Wall, as well as serving at Arkley, Forfar and Egypt.

“To commemorate his service towards the Allied war effort during the Second World War, Kenny was awarded the Legion’s anniversary coin. It was a proud moment for him, and for Donnie and I, to be able to present the award and to express our thanks to him for his part in serving King and country.”

Kenny, whose funeral was on June 9, is survived by Zena, who is in Dun Eisdean, his three children and their families. His younger sister Catriona is in care in Ayr.

(This tribute has created from earlier published memories and reports, with thanks to Sandy Matheson, Angus Nicolson, and Andrew Sim.)