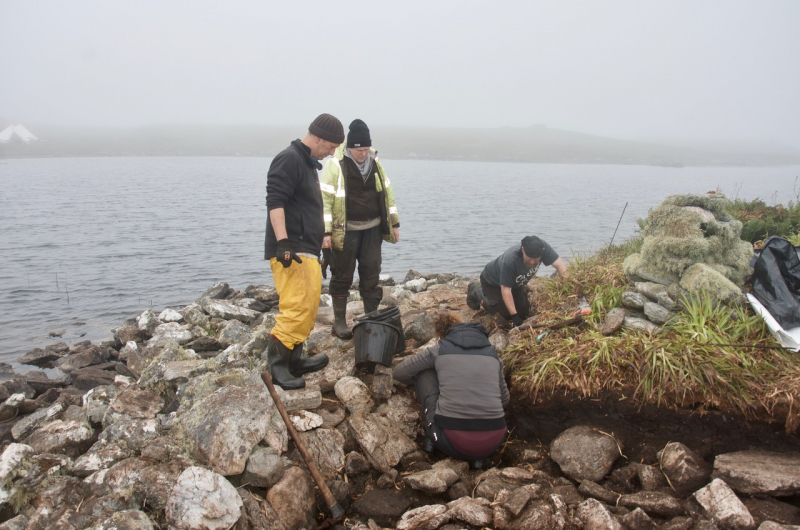 An archaeological excavation now underway in Carloway is unveiling artefacts and information of international significance, according to university researchers.

And the discovery of new information about the Neolithic period in the islands, including what they ate, where they lived and how they came to the islands at all is attributed to a Lewis diver who ‘did everything right.’ 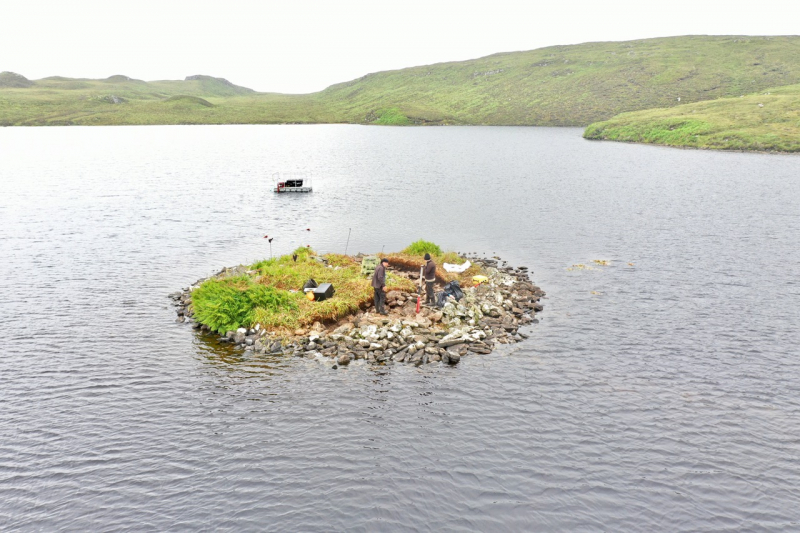 Former Royal Navy diver and search and rescue helicopter winchman Chris Murray has established a reputation for extraordinary finds in the lochs of Lewis and Harris.

His discoveries, including near-complete vessels and sherds of pots, attracted researchers to the islands to examine more closely the mysterious islands in our lochs.

Theories have been put forward that these man-made islands, some reached by stepping stones or causeways, could be all that remains of crannogs or lake-dwellings, similar to the reconstructed one recently destroyed by fire in Perthshire.

Now Professor Fraser Sturt of Southampton University and Professor Duncan Garrow of the University of Reading have been awarded funding from the Arts and Humanities Research Council for a month-long excavation in Lewis. 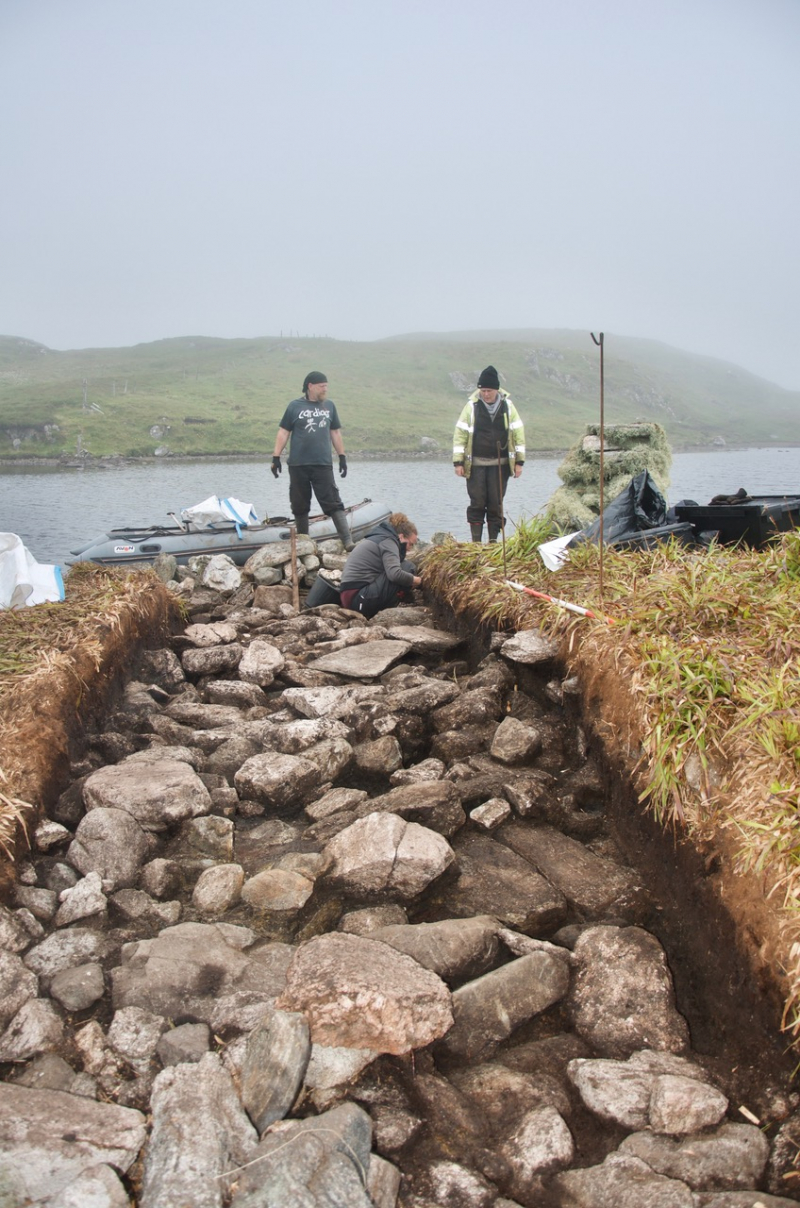 Throughout the month of July, they’ll be working at Loch Borgastail, opening a two-metre trench across a man-made island in the loch and continuing the trench into the underwater environment.

Professor Sturt said: “The island itself is quite small – about 15-20 metres across – but it definitely looks like it’s been made by piling rocks and there’s a partially submerged causeway leading to it.

“Chris found it by searching on Google Earth for likely candidates and later by diving and looking for pieces of pot, and we were here in 2016/17 doing some preliminary research.

“Now we’ve been funded for a proper investigation and even at this early stage we are finding timbers, in remarkably good state of preservation, which are really rare to find in this location.”

Finds from the site, including the timbers, have been dated to the Neolithic period, 5-6,000 years ago, between 3,800BC and 2,000BC. The discoveries already open up a huge discussion, resetting the parameters on the way in which islanders could have arrived in the Outer Hebrides and the way they lived once they were here.

Professor Sturt said: “We didn’t really know that these sites were made in the Neolithic, and we are asking the question why were they there? The islands are too small to be fortresses, only really large enough for one family, but people are going there, perhaps preparing food and throwing or placing things into the water.”

Among the techniques being used this month are physical digging, coring in the surrounding land and taking sedimentary DNA from the loch itself. The researchers hope by these techniques to find out where people were living and where they were growing the food that they ate.

Samples of lipids from within pots will be taken – effectively scraping the grease deposits from the inside of pots to see what was in them, and whether different pots were used for different purposes.

Working tremendously in their favour is the undisturbed nature of the site. Apart from a handful of 19th and 20th century fishing lures, there is nothing in the water between the Neolithic period and the present day.

Professor Sturt said: “It’s amazingly clear information and we can ask precise questions that are really targeted. The underwater environment is all preserved and has been undisturbed, literally since that pot, that sherd or that timber was placed underwater.

“There hasn’t even been wave action to break or move the artefacts about. These are things that have never been touched, so you are looking at things put there five or six thousand years ago.”

The harvest of knowledge that will result once the reports are written up owes a great deal to the curiosity and skills of Chris Murray.

Last Tuesday (6 July) Chris came up with his latest underwater discovery in another Lewis loch, finding an almost complete Neolithic vessel lying in 10 feet of water.

Professor Sturt said: “Chris has done amazing work in Lewis and Harris. We wouldn’t have come here if he hadn’t done his first research and used his professional skills – his ability to be methodical and relaxed and to take his time underwater.

“More than that, he knew when to tell people and who to tell and he carefully recorded context. The danger is that if you just take a pot sherd but you don’t do the right things, the context is lost. Chris has done everything right. He’s taken his time, told the right people and has brought us the knowledge.

“We would not be here and we would not know about this if he had not done what he has done.”

Professor Sturt and Professor Garrow will report on their project, titled Islands of Stone, in an initial report in approximately six months time, with published papers following later and getting wide dissemination online.

For now, there is a message for island residents: “We want to do more in the future with people who live here and who know the landscape, but for now we want people to understand how amazing, unique and internationally significant these discoveries are.

“It’s a truly special record of international significance that is entirely different to what we are seeing anywhere else. It will bring us new insights into how people reached the islands and made them home, as well as a good understanding of the changing climate and environment here in the islands over the past 10,000 years.”

The pictures show the team of archaeologists including Professor Sturt (left) at work in Carloway this week, diving in the loch waters, an aerial view of the site and Chris Murray’s recent Neolithic find (Chris Murray).