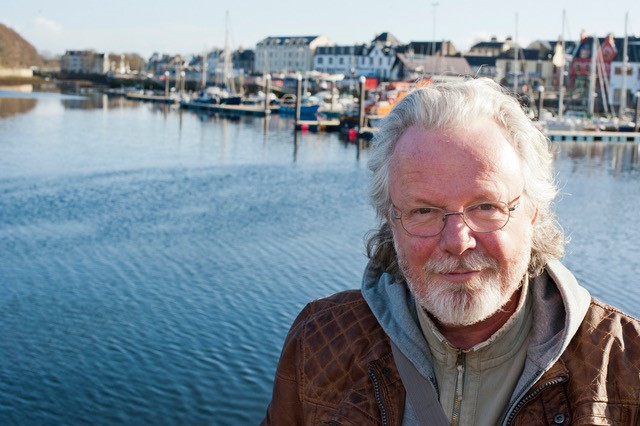 Peter May, the international bestselling crime writer, Scottish television screenwriter and novelist, has gifted £10,000 to the University of the Highlands and Islands as part of its tenth birthday celebrations, to establish a decade of student prizes for fictional writing.

Only a year ago Peter was donating six iPads to NHS Western Isles to facilitate its new Virtual Visiting service. Peter,  the author of the best-selling Lewis Trilogy of crime novels, set in and around the Isle of Lewis, had also recently released the novel Lockdown, penned in 2005 but eerily predicting the lockdown that would result from a global pandemic.  Mr May had spent time as a patient in Western Isles Hospital in the 1990s, when he was staying in Lewis during filming of the Gaelic TV series Machair.

He said: “Having pledged the entire amount of the advance on my novel to the frontline of the fight against coronavirus, I have tried wherever possible to see that a good proportion of that money goes back to the people of the Western Isles, to whom I owe so much of my success. I think the Virtual Visiting scheme at the NHS hospital in Stornoway is a brilliant idea and hope that my small contribution will help keep patients and loved ones in touch. It is particularly satisfying to be able to give back to this particular hospital where I received such wonderful care during a week spent as a patient.”

Peter, who was awarded an honorary doctorate by UHI  in 2019, is a guest speaker at the university's next ‘Leader Perspectives' interview online at 4pm on 30 June 2021.

As well as launching the ‘The Peter May Fiction Prize' he will talk about his novel ‘Lockdown' and his own personal journey, on how self-belief is vital yet challenging.

The new prize, managed by the university's development office, is open to all further and higher education students at the University of the Highlands and Islands 2021 graduates.

Submissions are welcomed in Gaelic, Scots or English before 15 October. The author will pick a winner, chosen from a shortlist of five, in December.  They will receive a cash prize of £1,000.

Talking about his motivation for setting up a competition with the university, Peter said: "One of the hardest things you will face as a writer is getting that first break.  It doesn't even have to be publication.  Just acknowledgment that someone else believes in you, too.  It's that confirmation of your talent which will motivate you to keep writing, and hopefully go on to ultimate success.  I wanted to give aspiring writers among the student population of the University of the Highlands and Islands the chance of their first break, and I'm delighted that the financial rewards of my own success have given me the opportunity to do just that."

Alison Wilson, Head of Development at the University of the Highland and Islands added: "This is a unique opportunity for University of the Highlands and Islands students, and we are hugely grateful to Peter for choosing to become one of our donors. Gifts like these make a real difference to our students' lives, not only providing vital financial support to allow them to continue their learning journey, but also helping them develop the confidence that comes from others recognising their potential. We look forward to working with Peter, our staff and students over the coming years."