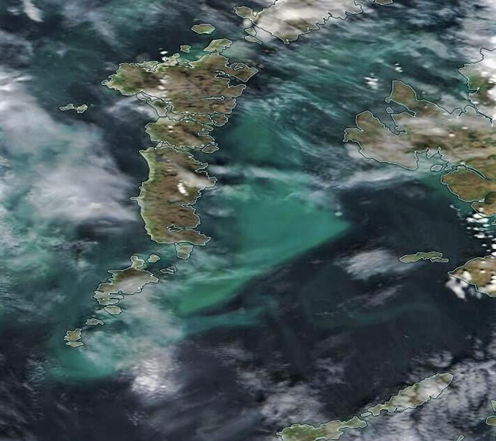 Risks as algae bloom in Minch

A huge bloom of blue-green algae, also known as cyanobacteria, is showing up on satellite imagery along the length of the Minch.

The bloom, appearing as a stain of turquoise on an otherwise deep blue sea, was spotted by Stornoway meteorologist Eddy ‘Weather’ Graham on Monday (7 June), when he said: “No, you are not imagining it, the sea really is a lovely turquoise green around Stornoway and the Minch at the moment, likely due to billions of tiny phytoplankton enjoying and growing in the abundant sunshine, surrounded by cold waters.”

But the size and spread of the bloom is now beginning to cause concern to the Scottish Environment Protection Agency (SEPA) and other bodies.

Highland Council’s environmental health department yesterday (Tuesday) said that they are watching the phenomenon as they issued warnings about possible health implications for people and animals which come into contact with the water.

They said: “Satellite imagery provided by SEPA shows the vast extent of the bloom in the Minch, with potential for the bloom to impact across multiple locations.

“Contact with blue-green algae and the toxins it may produce can have health effects for humans and animals. As a precautionary measure contact with any algal scum should be avoided by people and pets. 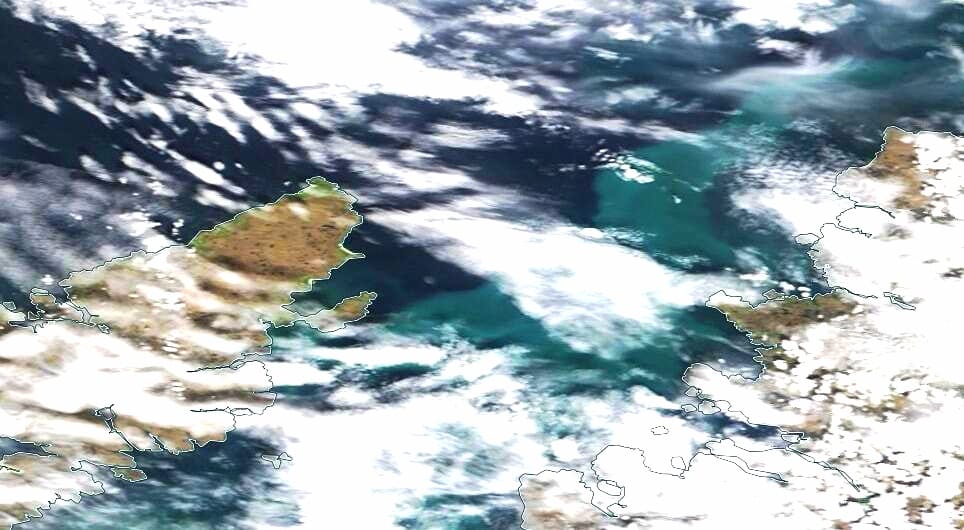 “Some blue-green algae may give rise to adverse medical effects – but not always. Effects on people coming into contact with toxic scums include skin rashes, eye irritation, vomiting and diarrhoea, fever and pains in muscles and joints.

“Toxic algae have caused deaths of livestock and dogs, waterbirds and fish.”

Responding to some of the social media comments about the bloom, a Comhairle nan Eilean Siar environmental services spokesperson said: “This is why two commercial shellfish areas (Traigh Mhòr, Barra and Loch Leurbost, Lewis) are currently closed, due to high levels of toxins present in the shellfish.

“The shellfish filter feed on the phytoplankton, some of which produce toxins that accumulate in the shellfish meat. Shellfish toxins are not destroyed by heat when cooking.”

Health Protection Scotland said that surveys in different parts of the world have found that approximately 45% to 90% of blooms of blue-green algae produce a range of toxins including neuro- and hepatotoxins and lipopolysaccharides.

They said the assessment of the associated risks to public health from algal blooms is complex, and guidelines and information have been compiled to support the assessment and response to blue-green algal blooms (available here https://www.gov.scot/publications/cyanobacteria-blue-green-algae-inland-inshore-waters-assessment-minimisation-risks-public-health/)

The naturally-occurring algae change the colour of water and can cause a scum that looks like paint to collect on the shore-line. The behaviour of a bloom is erratic and the level of its toxicity can fluctuate; it can appear one day, be dispersed by the wind and re-accumulate at any time.

The satellite images of the Minch from Monday were taken by NASA and supplied by SEPA.