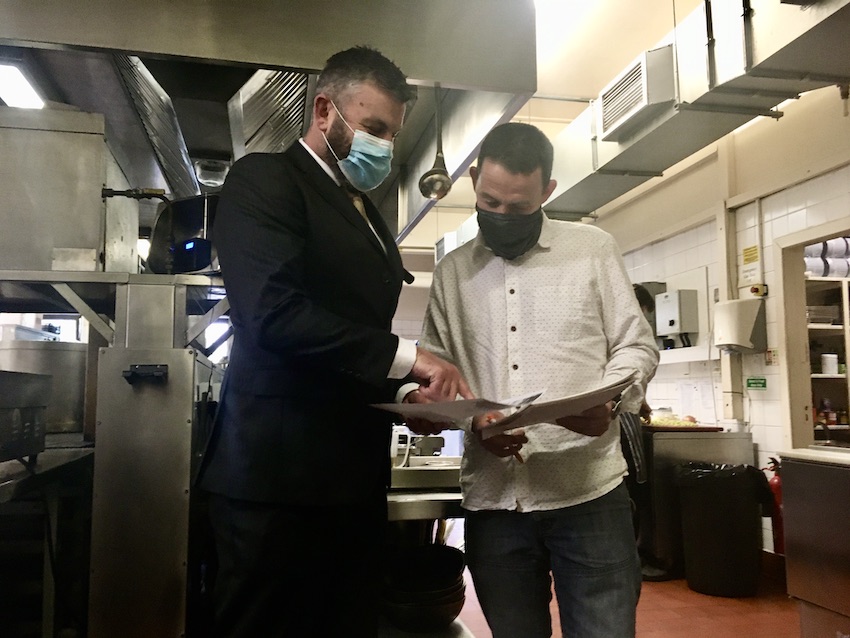 A new career path is being mapped out in one of the busiest industries of the islands, thanks to an alliance between Cala Hotels and Lews Castle College UHI.

Next week, as fifth-year pupils make their move to the sixth year at The Nicolson Institute, some of those pupils will start ‘getting acquainted with the kitchen’ as part of a new approach to professional cookery.

They are the first students on a double-headed course cooked up by two highly experienced hospitality professionals – Stuart Beaufoy, manager of Cala Hotels and chef James Mackenzie, formerly of Stornoway’s Digby Chick restaurant.

Between them Stuart and James have cooked up a way for islanders to enter the chef’s profession, with a practical, local and distinctively island approach.

It unites classroom teaching at Lews Castle College UHI with employment at Cala Hotels and it will lead, ultimately, to a National Certificate in professional cookery.

Lews Castle College UHI is always looking for new ways to meet the needs of the local industry, increasing the resilience of the local economy. This course is also part of a new focus on food and drink, bringing together island food businesses and the tourism sector.

Stuart said: “For some time we’ve been working with the college to get an idea for a chef’s course up and running, with the idea that the students will be working with us but, at the same time, going to college for three mornings a week over the quieter months of the year.

“It’s about offering someone the opportunity to come and work with us and to get their entry into the hospitality and chef trade as a planned career move.”

The Cala Hotel group – which includes the Cabarfeidh Hotel, Caladh Inn and Royal Hotel – employs 20 chefs, and five of them will start training for the professional qualification in October. It’s hoped that other restaurants and hotels will also take advantage of the new course, expanding the intake for the future.

Meanwhile The Nicolson Institute students will start their experience next week with a short introduction over six school periods a week, learning about hygiene, cooking processes, food preparation and craft bakery.

These two courses will set the tone for the new aspects of the college syllabus – an access course as a National Progression Award (NPA 4) and a National Certificate in professional cookery (NC 5), both accredited by the Scottish Qualifications Authority (SQA).

James Mackenzie, who has decades of experience in the kitchen and running restaurants, said: “I’m trying to give chefs an idea of what’s ahead of them in the hospitality industry, rather than just doing training that ticks boxes.

“When we were in college, we used to feel that we learnt more after we had finished training and I want to change that, we’re trying to prepare them for the world of work.”

In Stuart’s view, the world of work in the Western Isles is crying out for this opportunity, with restaurants in the islands always on the hunt for new, motivated and experienced staff.

He said: “Hospitality and tourism is such a strong sector in the islands now, we’ve got enough positions in enough kitchens for there to be plenty of opportunities to work.

“We want cookery and hospitality to be seen as a career path for people to follow, to move up and to be successful. In Australia hospitality is very much a profession and we really want to get that message across to people, that this is something you could do anywhere in the world.”

And James added: “It’s really something that has to be addressed – restaurants always come to Easter and have that same worry every year of getting staff.

“This is not a short-term project; the island is not going to get quieter for tourism. There is such an influx of people now and the season is getting longer.”

Both Stuart and James want to encourage that trend, feeding the growing reputation of Lewis and Harris as ‘foodie’ destinations within the tourism market. Stuart said: “The larder here is so strong that there is no reason why Lewis and Harris can’t be seen as somewhere that you come for food.”

Among future plans for the course, a new on-campus restaurant is envisaged, where students will be able to serve small groups of visitors in a relatively stress-free environment, but those studying for the National Certificate will also be expected to be in employment already.

The main intention is that cookery, serving up excellent food using local produce, turns into a positive career choice with island-based opportunities for top-quality training and employment.

James said: “We want to see people understanding that catering and hospitality are not ‘stop-gap’ careers. There’s a perception that it’s long hours and poorly paid, but the pay is going to improve because of supply and demand.

The picture shows Stuart (left) and James making plans in the kitchen at the Cabarfeidh Hotel.