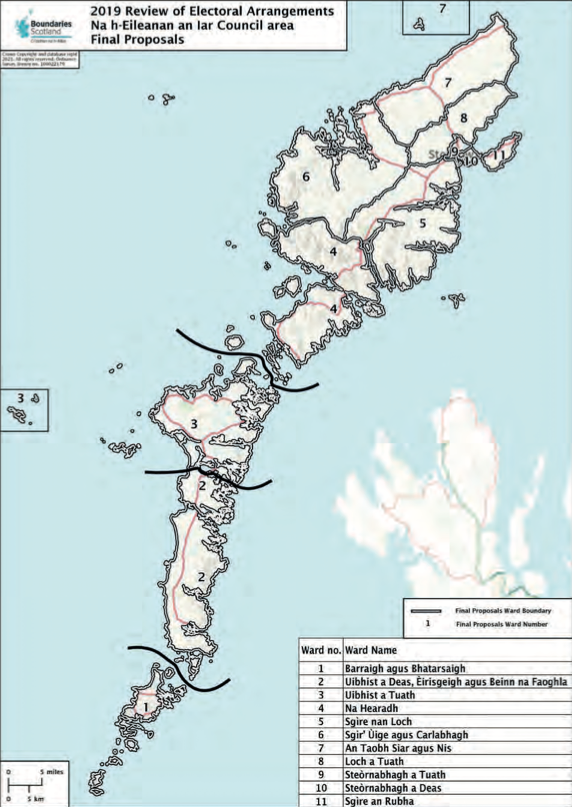 The number of councillors in the Western Isles should be reduced to 29, and ward numbers increased from nine to 11, according to the final recommendations of Boundaries Scotland’s review of electoral arrangements.

The independent advisory body published its recommendations on Friday (28 May) after a process which has stretched over nearly three years. Their final report and proposals have now been put before Scottish ministers and made public at https://boundaries.scot/sites/default/files/CNES_Final_Report_Reduced_0.pdf

The recommendations broadly follow proposals laid before a public consultation late in 2019.They describe a new ward profile of 11 wards, retaining five existing ward names and recognising the accepted boundary between Lewis and Harris for the first time.

Their recommendations are for four councillors in the two Stornoway wards and two in six other wards. Only three wards will have three councillors: Broad Bay, Westside and Ness and the ward including South Uist, Eriskay and Benbecula.

The commission first met officials at Comhairle nan Eilean Siar for this review in July 2018 and developed its proposals in December 2019 after a 12-week public consultation from September that year.

“In developing our final proposals we considered carefully all responses received, including from the council and during the public consultation.

“Our final proposals took account of comments from our public consultation and we have proposed a two-member, rather than a one-member, Barraigh agus Bhatarsaigh ward to improve representation in the southern isles in an area remote from Stornoway.

“Our final proposals are otherwise unchanged from our public consultation because our proposals had been generally supported and some of the alternative suggestions we had received were out-with the legislation for this review. In developing our final proposals we took full account of the legislative factors governing our work.”

Reviews of electoral arrangements in every council area must be carried out at intervals of no more than 15 years and take account of the factors including ensuring that the number of electors per councillor in each ward are as nearly as may be the same across Scotland.

The current electoral arrangements in the Na h-Eileanan an Iar Council area have remained unchanged since 2007. They have been used for local government elections in 2007, 2012 and 2017. The last review was in 2016, but proposals were not implemented because of the introduction of the Bill on the Scottish Islands, which became the Islands (Scotland) Act 2018.