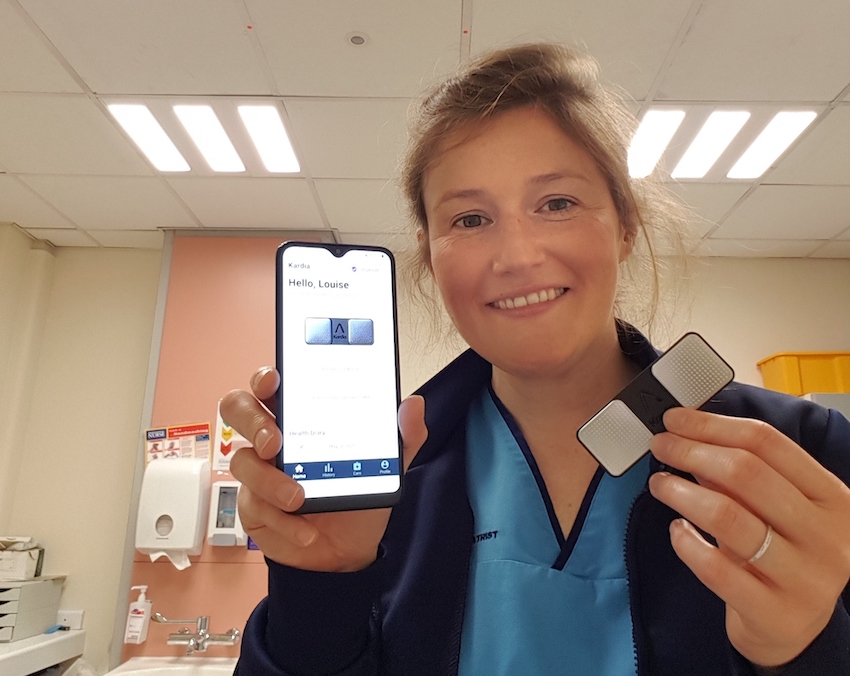 Both the Technology Enabled Care (TEC) and Cardiac Nursing teams have partnered with the Podiatry Department, to enable on-the-spot digital ECG (Electrocardiogram) testing for patients who have a suspected undiagnosed problem with their heart rhythm.

Previously vascular health was checked routinely as part of a normal podiatry assessment, with existing pathway results sent as a note to the patient’s GP for further assessment if any abnormalities were found.

However, the new patient-focused pathway means that a simple 30-second check using a small handheld device, now enables the podiatrist to take a clinically-validated ECG during the assessment.

The patient’s results are then immediately emailed directly to the Cardiac Specialist Nursing Team for review, before being forwarded to the patient’s GP with a confirmed diagnosis.

Already, this has already shown significant benefits, including reducing the time between the podiatrist identifying any problems, and treatment being initiated.

In addition, the project is being used to improve early identification of Atrial Fibrillation (AF), which is a common cause of an irregular pulse which can put a patient at higher risk in terms of both cardiac and vascular problems, such as stroke.  Subsequently this early identification and starting a patient with appropriate treatment earlier (blood thinners), can help prevent strokes and, in turn, reduce living with more serious, disabling consequences.

Louise Campbell, NHS Western Isles Podiatrist, has already found the technology invaluable and said, “As podiatrists we regularly listen to the pulses of the lower limb as part of our routine assessment.  Now, with the introduction of the Kardia monitor to the Western Isles Podiatry Team, we are able to easily capture an ECG via Kardia at the moment an altered rhythm is noted, which the Cardiac Specialist Nursing Team can then interpret.

“This not only saves valuable time for the patient and GP surgeries, but can also potentially save lives should AF be detected and diagnosed earlier as a result.”

Whilst the new pathway is still in its early stages of deployment, results to date have shown that 50% of patients checked (due to the Podiatrist detecting an abnormal rhythm) have had a confirmed diagnosis of a heart rhythm problem.

Debra Vickers, NHS Western Isles Cardiac Nurse Consultant, explained: “This new initiative is a huge improvement from the previous care pathway.  Previously all patients found to have an irregular pulse at their Podiatry appointment would require receiving a 12-Lead ECG at their GP Practice.  This could take time to organise, and the rhythm may not have been present at that time so be missed.

“We have been using these devices for a few years now within the local Cardiac Team and we have seen first-hand how they increase the chances of abnormal heart rhythm detection, whilst also reducing attendance through GP Practices.”

According to www.stroke.org.uk atrial fibrillation is responsible for approximately 20% of all strokes, which costs the NHS £2.2 billion each year.