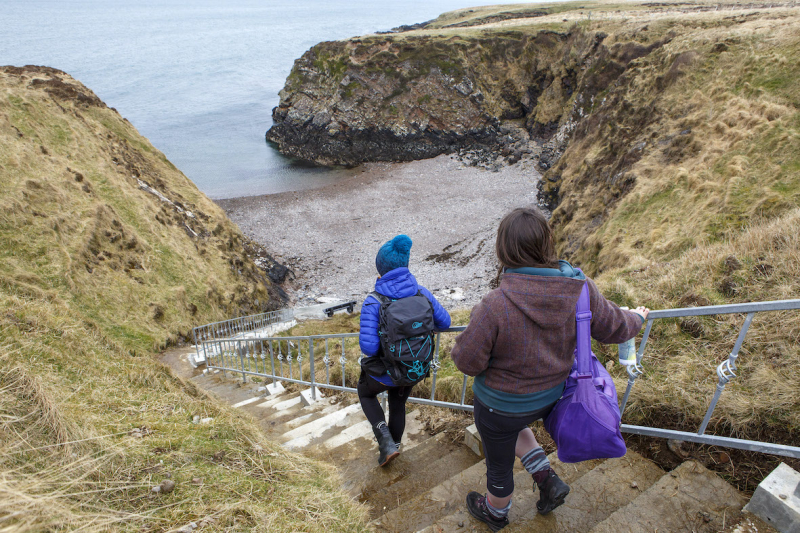 Stepping out for swims from cove…

A project to restore a historic access route to a cove on Point has been completed, allowing islanders safe access to an area which was once used as a landing site for fishing boats but has become increasingly popular with sea swimmers in recent times.

Work on the Shulishader Steps, which began early last year and was put on hold for several months due to lockdown, was finished earlier in April. The steep flight of steps down to the geodha has now been cleaned and repaired, which a few additional steps added to the original 88, and a metal handrail installed – all for safety purposes.

An access path of around 300 metres has also been created, from the township to the top of the steps, and a concrete ‘landing site’ has been built at the bottom of the steps. A couple of benches of recycled plastic have also been installed, after funding was secured to buy benches for along the whole of the Point and Sandwick Coastal Community Path, as it is completed.

The work at Shulishader is part of the overall vision for a Point and Sandwick Coastal Community Path and community wind farm Point and Sandwick Trust has been one of the key funders, with the wind farm’s community consultants Tony Robson and Alasdair Nicholson helping to support the path project in their technical and fundraising capacities.

At Shulishader, the work on the steps and access track was done by construction company Breedon while the handrail was made by Vagabond Gates and Railings, based in Knock, Point.

There is sadness in the Point and Sandwick community that Dr Donald Taylor from Shulishader, a longtime campaigner for work on the steps and one of the original Point and Sandwick Trust board members, died shortly after the works came to completion.

Tony Robson, PST’s engineering consultant who is involved with the technical aspects of developing the coastal path, said: “He was there, admiring the work. Even a few weeks before he passed away, he was on the site inspecting, to make sure the work was done to his satisfaction. He was pleased to see it being done, because he had always been keen on it.”

Point and Sandwick Trust donated £9,000 towards the work at Shulishader, as part of the vision for a 40km path leading out from Stornoway through Steinish, Sandwick and the Braighe and around the peninsula of Point – a project expected to cost a total of around £1million, although the work is being done in stages, as funding allows.

The most recent funding secured was a grant of £46,182 from the Scottish Government’s Islands Green Recovery Programme, which will pay for the recycled plastic benches that are to go in all along the route, as well as funding the second part of the Steinish Circular Coastal Trail, which is part of the overall path vision. The first phase of the path at Steinish was also recently completed and proved to be an instant hit.

One sea swimmer, Eilidh Whiteford, gave her verdict after a dip in April, shortly after the work was finished. She said: “I’d heard of folk swimming down at Shulishader but had never been before now. What a place! The geodha is one of those wee gem spots that we’re so lucky to have hidden around the Hebrides, and accessing down to the shore could not be easier thanks to the new pathway and wide, sturdy steps.

“A perfect sheltered, secluded little bay – and the hike back up the stairway certainly helps you warm up after a chilly sea dip!”

The Point and Sandwick Coastal Community Path group was also pleased with the completion, as was Point and Sandwick Trust, which is part funding the path as one of its ‘legacy projects’.  Matt Bruce, chair of the coastal path group, said they were “pleased to be able to complete another section of work at the Shulishader Steps.”

Point and Sandwick Trust is a multi-award-winning charitable organisation in the Outer Hebrides which uses the income of community-generated wind power to support projects and organisations developing social, cultural, educational and environmental wellbeing.

The charity reinvests 100 per cent of the profits from its Beinn Ghrideag wind farm – the largest UK community wind farm in terms of output (9MW) – in its local community and has been recognised as leading the way in community renewable energy and social enterprise.

Picture by Sandie Maciver of SandiePhotos