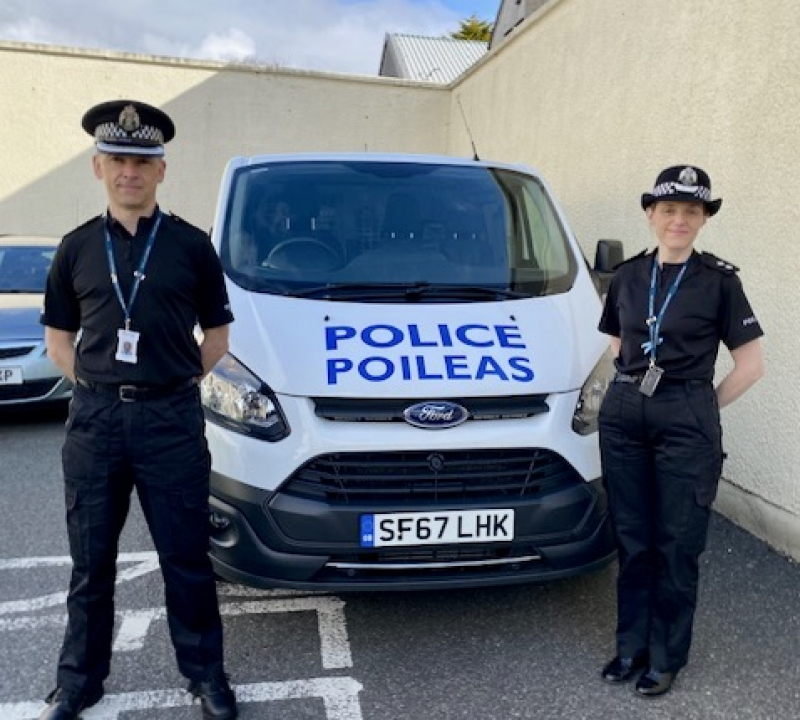 A new top team is now in place at Western Isles police, with a new inspector and chief inspector taking up their roles today (Wednesday 28 April).

Both Chief Inspector Macleod and Inspector Mackenzie are returning to the islands of their birth, bringing with them a wealth of experience gained across the former Northern Constabulary area, now the North Division of Police Scotland.

Chief Inspector Macleod is a Stornoway man who joined the police in 1995, after attending university in Glasgow and a short time working as the development officer for the Western Isles Duke of Edinburgh Award group.

He worked in Inverness for five years before returning to Stornoway as a uniformed officer and then in CID, later promoted to sergeant with a posting to Wick.

After a period as a staff officer at police headquarters in Inverness, he spent time in Aviemore as area inspector for Badenoch and Strathspey.

More recently he’s held roles at HQ in the incident response team and working on professional standards, before his return this month to Stornoway as temporary chief inspector.

He said: “From a personal point of view, I am absolutely delighted to be back home and very excited to be involved once again in policing in the islands.

“Our focus as a command area is to help keep people and communities safe, enhancing quality of life and with a particular focus on protecting the most vulnerable.

“We are fortunate to live in a place where crime rates are low and serious crime is relatively rare. I want to make sure the people of the Western Isles receive the best possible service from Police Scotland.

“A big part of my role as area commander is to manage our relationships with partners and, for a while, I think I will be getting my feet under the table and establishing these relationships.

“My view of the current Covid situation in the islands is that there is real cause for optimism as we move through the Government’s roadmap out of restrictions.

“The focus just now for myself and partner agencies is to work towards opening up and to safely negotiate any issues connected with visitor management. We have businesses that depend on the presence of tourists and we want to open up safely and successfully for everyone’s sake.

“The pathway to reopening is there, and there seems to me to be cause for optimism, but everybody needs to keep focus on adhering to guidelines, hygiene and social distancing for the time being at least.”

Inspector Mackenzie will have the operational responsibility for ensuring that the population – and island visitors – maintain the behaviour which has enabled this cause for optimism.

She said: “The biggest challenge in the immediate future is to support people to get back to normal as we navigate our way out of Covid.

“That includes visitor management and public safety, and we will continue to be guided by our ‘four Es’ approach – engaging with people, explaining the reasons behind the regulations and encouraging them to comply before resorting to any enforcement.”

Inspector Mackenzie, too, is looking forward to being back in her own island community and contributing to public well-being at a critical time.

She joined the police in 2004 after growing up in Point and spent her first three and a half years in community policing in Portree, before moving to Dingwall as part of a proactive policing team.

A period as a detective constable in the public protection unit in Stornoway followed, before she was promoted to sergeant in Inverness, spending 18 months there in a response team.

Her second stint in Stornoway was as a uniformed sergeant for over three years, before she moved into a staff officer role in executive support at Police Scotland headquarters, Tuliallan. She’s since spent a year as a community policing inspector in Inverness before returning to Stornoway this month as area inspector.

She said: “I am really looking forward to being able to live and work back at home and to working with what I already know is a great team of partners, to make sure that this continues to be an attractive place for people to live and to visit.

“I know a lot of people from working here previously and I am looking forward to seeing those familiar faces again and to working together to continue to make a difference to the quality of life in my home islands.

“This is a fantastic location to work as a police officer – you are able to become fully involved in the community and to feel like you can help make a difference. People work well together and all agencies work closely, which is a huge benefit for the wider community.”

The picture shows Chief Inspector Macleod and Inspector Mackenzie, during their first week in their new posts, outside Stornoway Police Station.