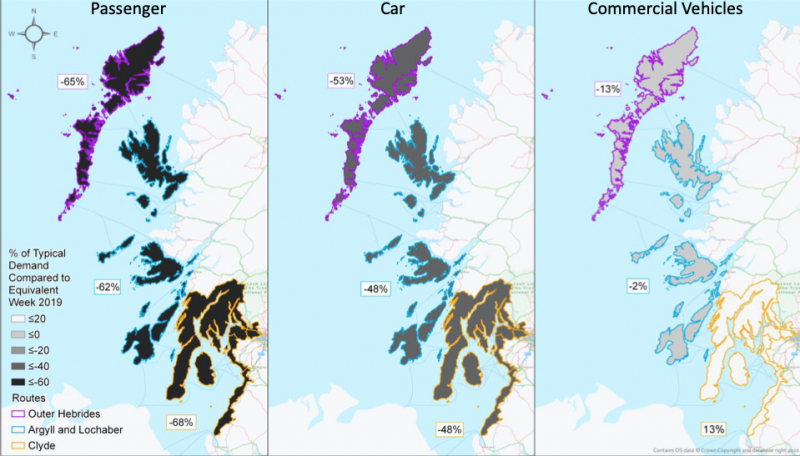 Ferry crisis 2: services to be cut back

With almost no ferries actually sailing to and from the Western Isles today (Tuesday February 23) because of storms and breakdowns, CalMac look set to sail straight into another political storm, with plans to slash those services.

The Clyde and Hebrides ferry service provider has placed a proposal for a drastically-revised timetable of services on the table, responding to the huge fall in demand for ferry travel during the Covid crisis and the potential continuation of current travel restrictions.

The proposal is to cut ferry services ahead of an, as-yet-undated, return to the summer timetable, in response to Transport Scotland data which shows that both passenger and commercial traffic in the Outer Hebrides fell significantly over the past six months, in comparison with month-by-month figures for the same period in 2019/20.

Tonight, Robert Morrison, Operations Director for CalMac, told welovestornoway.com: " Transport Scotland have asked CalMac to seek views on potential service reductions, based on current demand and in the context of ongoing travel restrictions.

"The information and feedback received will be shared with Transport Scotland, and this will in turn support any decisions they make around changes to our timetabled services."

The Transport Scotland report, COVID-19 Trends in Sub-national Travel, showed that passenger volumes for the week ending 29 January were down by 65% on the same week last year, with car numbers down 53% and commercial vehicles down by 13%.

Earlier this month (5 February) the general secretary of transport workers union TSSA, Manuel Cortes, said: “It’s a ridiculous waste of money for CalMac to be running empty ferries, to say nothing of its environmental impact.

“We know these ferries are a lifeline service and some must continue to run to the islands. But tourists aren’t travelling because of the lockdown and as a result, demand has sharply dropped.

“ScotRail has cut back its timetable and CalMac should do likewise.”

A Transport Scotland spokesperson said that the winter timetable meant that it was not originally necessary to reduce services at the outset of the latest lockdown, even though train and coach services on the mainland have cut or cancelled services.

However, they said: “Following engagement with the unions and reviewing its operations, we are awaiting a recommendation from CalMac around where services may be reduced.”

Harris Councillor Grant Fulton said today (Tuesday): “I and Councillor Mitchell have been exploring the views of the Harris community on the proposed timetable revisions.

“We have been on contact with all the community councils, trusts and with Harris Voluntary Services and got their views which we expressed at the meeting.

“People are obviously very concerned at the proposals and we expressed those feelings, with similar thoughts added by other councillors from across the Western Isles.

“The upshot was that the chief executive and the chair of the transportation committee are to write to Transport Scotland and to CalMac with regard to further engagement between them and Comhairle nan Eilean Siar about timetable changes.

“There is simply not enough information and the reduced timetable being proposed has a consultation period which is due to close tomorrow.

“All the information that we had from CalMac was that they were seeking views on service reductions based on ongoing demand and in the context of current restrictions.”

CalMac has been approached for comment on the consultation and timetable changes.