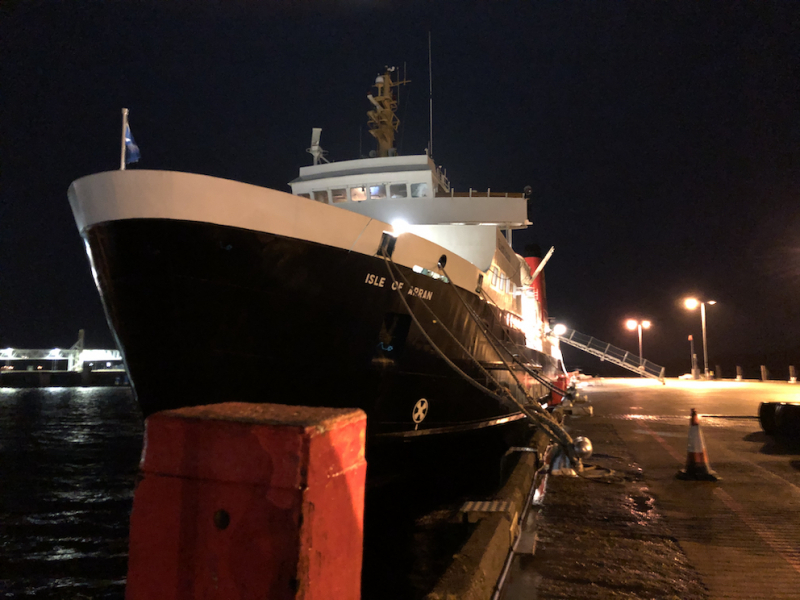 A further blow came this morning (Monday), as CalMac notified Barra and South Uist councillors that the MV Isle of Arran is being withdrawn from service.  The vessel reportedly left Lochboisdale this morning and had issues with her main propulsion. She was diverted to Uig to land passengers and traffic, with an estimated arrival time of 2:30pm. MV Isle of Arran will then be berthed at a mainland port to allow engineering support. This means the combined Oban-Castlebay-Lochboisdale service planned for today has now been cancelled. 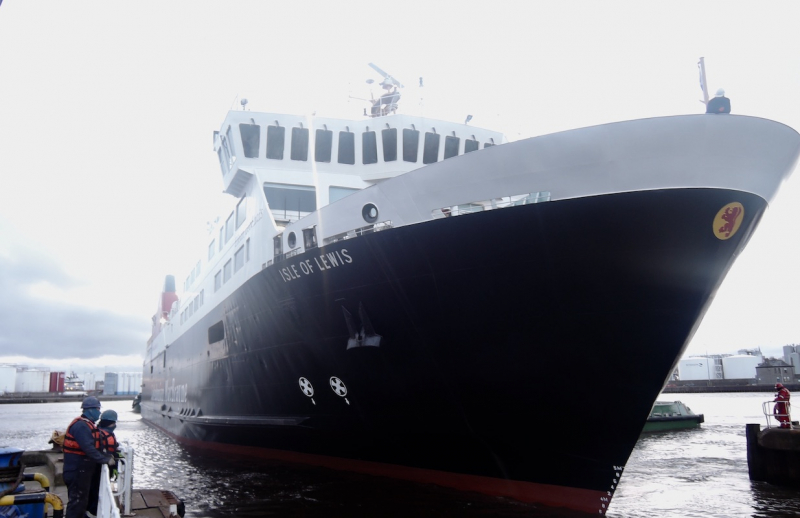 The MV Isle of Lewis ferry is back in the water and undergoing sea trials at Aberdeen today (Monday 22 February), but stands less chance of being back in service in the Islands tomorrow as promised last week.

With the MV Hebrides sent south to provide a service to Castlebay when weather permits, Tarbert and the Isle of Harris face additional days of depending on the ferries from Lochmaddy and Stornoway - themselves being cancelled every other day because of unpredictable weather conditions.

As of 2.30pm today, currently cancelled services are:

Weather disruption remains likely across the network from tonight into Wednesday after the Met Office this morning issued a new warning of strong winds for tomorrow (Tuesday) with gusts of 70mph possible across the Western Isles. 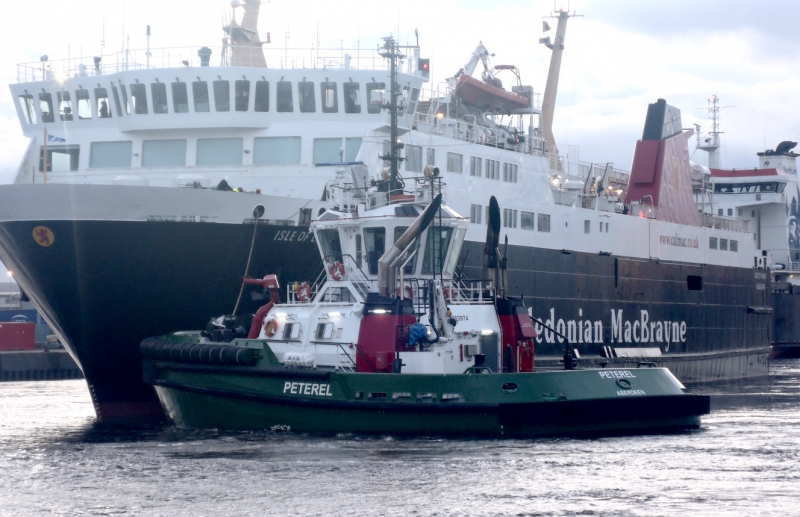 Na h-Eileanan an Iar MSP Alsadair Allan is the latest to call for long-term improvements to fleet resilience, with a letter to cabinet secretaries Paul Wheelhouse and Michael Mathieson on recent interruptions to the ferry service for the Isle of Barra.

He pointed out that Barra has now gone 10 days with only one ferry run to the mainland – the lifeline route for supplies of food and fuel – while her regular service vessel is in dry dock and possible relief vessels struggle to cope with the stormy sea conditions on the long cross-Minch route.

The MP said that the disruption has resulted in shops in Barra attempting to stock food via Eriskay, with perishables arriving days old, and island-based businesses, including seafood processors, being unable to ship fresh produce off the island on time.

His concerns will be backed by Castlebay and Vatersay Community Council, who are due to meet tomorrow (Tuesday), and who have CalMac services already firmly on their agenda.

This morning’s position beacon for the vessel remains alongside in Aberdeen and CalMac cannot definitively confirm when she will take up service from Oban. A post-dry-dock issue with her bow thrusters has caused the latest delay.

A CalMac spokesperson said today: “The vessel is currently still in Aberdeen and due to undergo sea trials from 1pm today (Monday).

“These will take around eight or nine hours to complete and then the vessel will look to reposition back round to the west coast.

“The vessel has completed the main scope of works that were required during overhaul and required access to the hull, but there may still be works to be completed when the vessel moves round to a wet dock.

“We were expecting the vessel to be back in position to pick up the Oban - Castlebay sailing tomorrow afternoon at 1340. However, the master has advised us that due to the current weather forecast, this may not be possible.”

CalMac’s patched-together solution to Barra’s long wait for a ferry service was to poach vessels from elsewhere in the network. MV Hebrides was redeployed from the Tarbert – Uig route to Barra over the weekend, leaving Harris without a service.

CalMac said they were unable to arrange sailings between Tarbert and Uig as the relief vessel MV Lord of the Isles cannot operate to the current pier structure. That left Harris with a potential service gap between Saturday and Wednesday which may now be extended.

Customers, including freight carriers, have been encouraged to try an alternative route via the Stornoway-Ullapool service, but that service is also reduced and liable to further disruption because of tomorrow’s wind forecast.

A review tomorrow is expected to establish whether Harris sailings can recommence on Wednesday.

Alasdair Allan MSP has asked the Scottish Government what can be done to improve fleet resilience.

He said: “The lack of resilience within the Clyde and Hebrides Ferry Network is having real economic and human consequences. This situation is mirrored by last year, which saw several five-day periods with no mainland ferry sailings.

“I have asked the Scottish Government what they can do to consider chartering additional vessels or other measures that might relieve the current strain on the fleet.

“While Barra is worst affected at present, other ports such as Lochboisdale, and now Tarbert, are suffering from the lack of suitable vessels.” 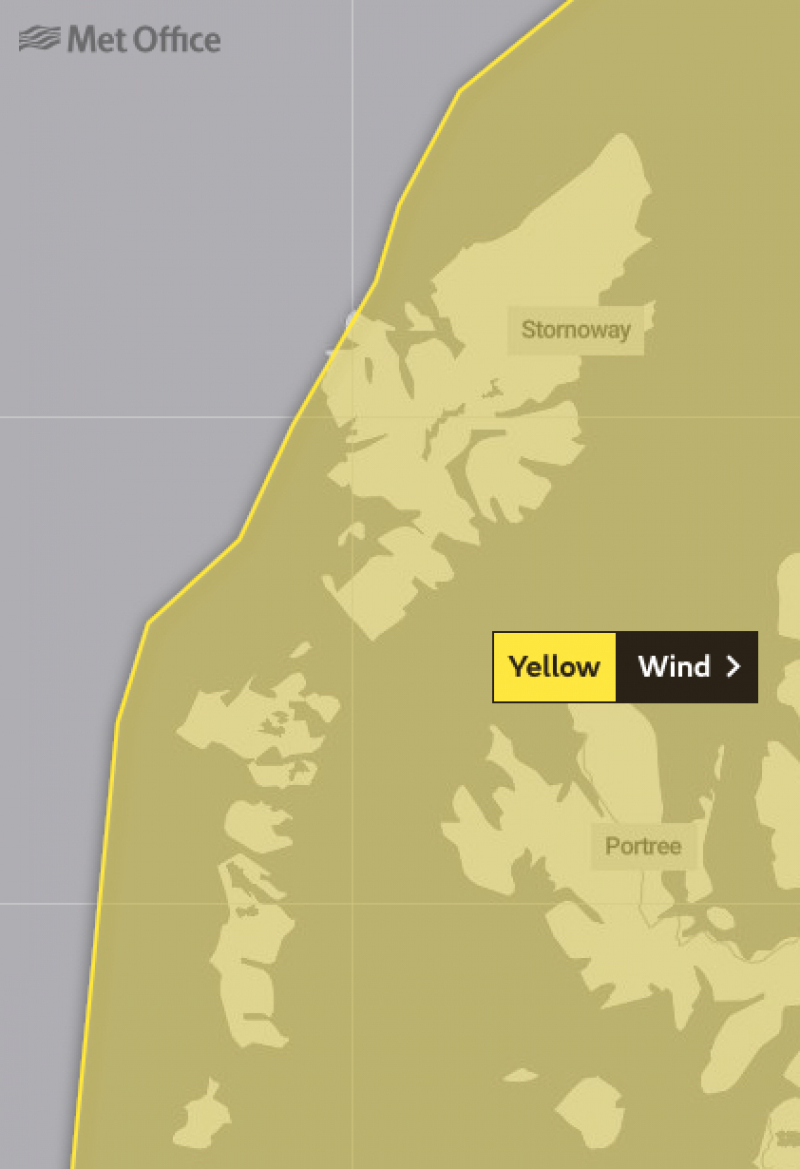 • The Met Office warning in place between 2am and 6pm tomorrow shows winds gusting 50-60mph, and up to 70mph in the Western Isles in the morning. Winds are expected to ease across the north-western half of Scotland during the afternoon.

Impacts such as short-term power loss, transport delay and coastal spray are expected in the warning area.

Images show MV Isle of Lewis leaving dry dock and being taken alongside in Aberdeen on Thursday last week (CalMac) and the Met Office warning area for tomorrow (Met Office).