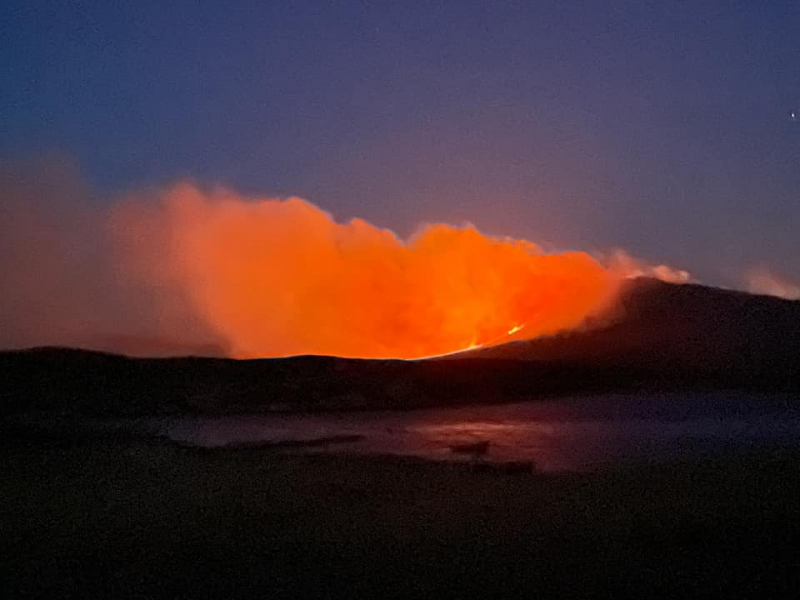 There’s been an impassioned plea today (Sunday 14 February), calling for people not to rush to judgement after a spate of wildfires across the Western Isles, fanned by drying south-easterly winds and stoked by bone-dry vegetation.

One blaze close on the hillside at Eaval in North Uist could be clearly seen from all directions as it burnt, apparently round the summit of the peak, over hours through Thursday and Friday (11 and 12 February).

Scottish Fire and Rescue Service, as well as fighting numerous wildfires throughout the islands, have been keen to ensure that nobody lays blame for the fires starting.

Issuing an ‘extreme risk of wildfire’ warning early last week, they said that vegetation had died off since last year and been dried out by frost and low temperatures, so that the smallest spark could start a major blaze.

But the family who lease the land at Eaval have been distressed by widespread speculation, aired on social media, which suggests that crofters are to blame for the rapidly spreading hill fire.

Kirsty Macdonald said: “Much as I know social media is a hive for ill-informed, inflammatory and thoughtless comments, when it affects your family directly it’s hard not to get a bit upset about it.

“When the fires broke out they looked very dramatic, and understandably a lot of people were scared by it.

“What happened next in these small communities, was a slew of social media comments on local pages about how irresponsible crofters are, and that burning heather is a despicable practice that’s bad for the environment.

“The lease of Eaval, one of the hills involved, has been in my family for three generations now. My Dad knows every inch of the hill and surrounding area like the back of his hand.

“On occasion they set ‘falaisgear’ which is a traditional/indigenous practice of burning small parts of moorland in order to generate new growth, for example where the heather has reached armpit height!

“But my family, ‘the crofters’, were nowhere near the hill when the fire on Eaval started out. Nobody knows how it started.

“People walk on the hills every day and, given the conditions and fire warning, it could have been something as simple as someone carelessly throwing away a cigarette, or a piece of glass on the ground, or a magnifying glass.

“So, it would be nice if people could think before posting accusatory comments on social media that are potentially hurtful to the people who have been taking care of and sustaining our land for centuries.

“Thankfully all the sheep are fine. The wildlife probably not so much, and obviously fires of this scale will be harmful for the environment. But please, please don’t blame the crofters.”

The picture shows Eaval during the height of the wildfire on Thursday night (Sinead MacAulay).