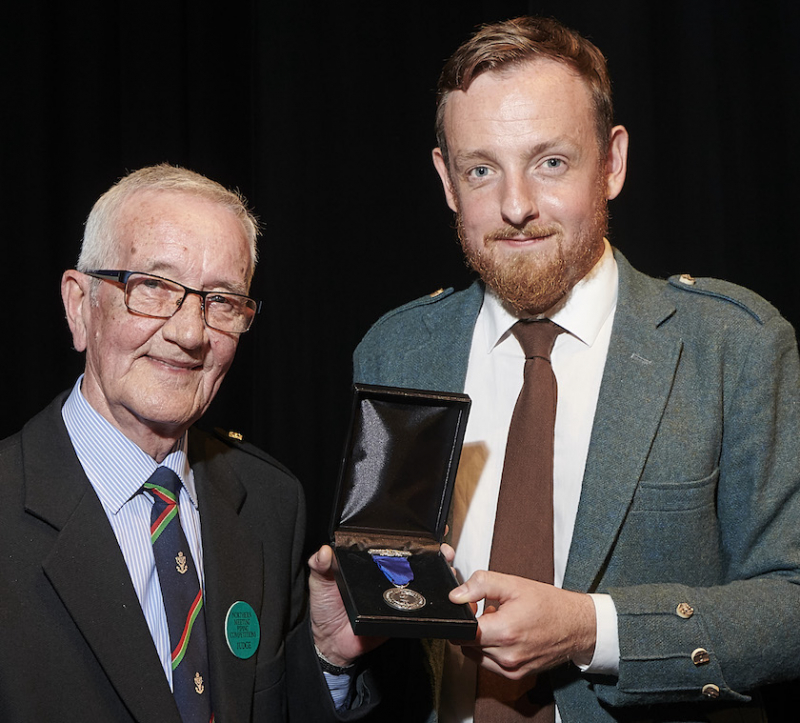 The Lewis and Harris Piping Society would like to pay tribute to the late Pipe Major Iain Murdo Morrison.

These words below were shared by Dr John Smith, chairman of the Piping Society, at a recent committee meeting, held via Zoom.

Pipe Major Iain Murdo Morrison passed away at the Western Isles Hospital, Stornoway, on the 17th December. Although he had been unwell for some time his death came somewhat unexpectedly, and caused ripples of sorrow in the community of Back where he lived, and in the wider piping community, where he was well known and respected. Several tributes have already been paid to him, in the local press, in the piping press and on social media.

These included a very nice tribute to him by Neil Smith, originally from Point, testifying to the kindness and generosity of PM Morrison, when he was a pupil of his more than 30 years ago. That was the experience of all those who were taught by PM Morrison over many years, from the most amateurish youngster struggling with grace notes and doublings, to the most accomplished such as the late PM Alasdair Gillies, whom he coached to achieve the unique record of 11 wins of the Northern Star for Light Music at the Northern Meetings in Inverness, the equivalent of an Olympic Gold Medal for piping. It is a record unlikely to ever be equalled, let alone bettered.

In his own competing days PM Morrison won all the top prizes. He was considered by his peers to have been the best at playing competition 2/4 Marches, and he had a unique “round” style of playing reels, which was very musical. His Army career culminated in a period as Pipe Major of the Queen’s Own Highlanders.

On retiring from the Army he returned to his native island and shortly afterwards took up the post of Piping Instructor for schools on the East side of Lewis, succeeding Angus ‘Boxer’ MacLeod. In addition, PM Morrison was happy to share his knowledge, skill and expertise freely in his own time. For many years he held a weekly evening session at Back school for youngsters learning the pipes. He was assisted by the late Angie ‘Scotch’ MacRae, who would tune the pipes for the youngsters before they went in to their ‘one to one’ with the Pipe Major. He also gave lessons privately in his own home, where all visitors were offered generous hospitality by Mrs Morrison.

He was a member of the committee of the Lewis and Harris Piping Society for more than 30 years, serving for most of that time as Piping Secretary. In that capacity he was responsible for arranging recitalists, he was closely involved in the annual Junior Competition, and for many years he was the main driver in organising the annual Donald MacLeod Memorial Competition. The original idea for that competition was developed in the early 90s by PM Morrison and his good friend and fellow soldier Captain Angus ‘Dodo’ Stewart, who was the Society Treasurer at the time. Sadly Dodo did not live long enough to see the success achieved by the competition under PM Morrison’s guidance.

His personal knowledge of Donald MacLeod and his music, and his extensive experience of piping at the highest level, were brought to bear in devising the format of the competition. He also advised from year to year on the pipers and the judges to be invited to Stornoway to “commemorate the man and his music”, and the Piping Society would like to express their deep sense of gratitude for his stewardship over the years. He was justifiably proud of what had been achieved with the competition, ably assisted by his daughter Donalda for the last decade, making it one of the best invitational competitions on the professional circuit.

Iain Murdo was a devoted family man, and will be most sorely missed by his wife Flora and their children, Catherine, Donalda and young Iain and their respective families, and we extend our deepest sympathy to them, and other close relatives.

His funeral, held under Covid restrictions and in inclement weather, was nevertheless well attended, and he was laid to rest in the local cemetery at Gress to the strains of James Duncan MacKenzie, his most successful local pupil, playing the piobaireachd Scarce of Fishing.

Picture: The late Pipe Major Iain Murdo Morrison (pictured left) with James Mackenzie, on the occasion of James winning the Silver Medal at the Northern Meeting in Inverness in 2019