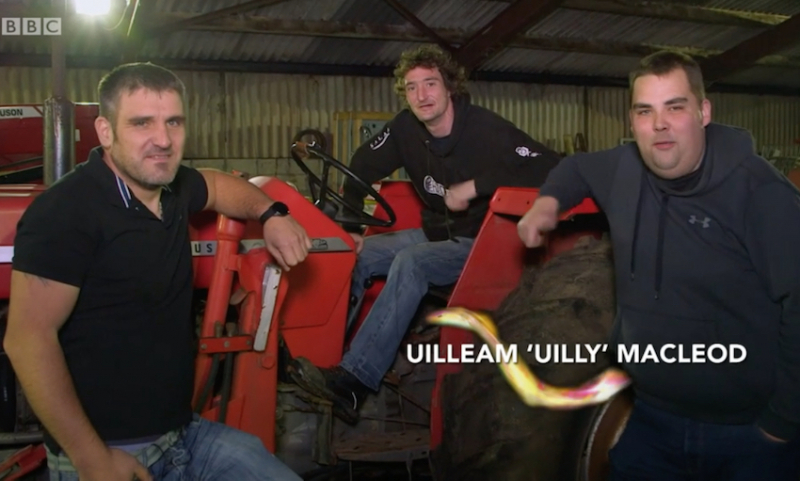 This time they won for best video; last year it was for best Live Act but opportunities for that have been non-existent in the past nine months and the Na Trads programme itself had to follow Covid-19 rules.

It was hosted in Scots, English and Gaelic by Alistair Heather and Mary Ann Kennedy. The award winners were announced along with specially-recorded music performances from some of traditional music’s top luminaries, including The Iona Fyfe Trio, Project Smok, Deirdre Graham, Jarlath Henderson and Karen Matheson as well as Phil Cunningham and many more.

This year’s event had been set to take place in Dundee’s Caird Hall but with live music and event restrictions in place for the foreseeable future, Hands Up for Trad worked to support artists and provide an alternative platform, culminating in two special programmes of Na Trads on BBC ALBA.

Joy Dunlop presented the inductees to the Hall of Fame on Friday evening, followed by the MG ALBA Scots Trad Music Awards themselves on Saturday.  The awards will be shown again on BBC ALBA at 9pm on Saturday 18th December 2020 and will be available on the BBC iPlayer for 30 days.

The Trad Video of the Year, sponsored by Threads of Sound, was Calum Dan’s Transit Van by Peat & Diesel.

The group said later: “We are delighted to have won Video of the year! A big thanks our label, sound engineer, friend, guide, janitor, organiser and now Award Winning Video Creator Keith [Morrison] at Wee Studio who was willing to stand in the middle of a scrapyard with an expensive camera and pretending to be a road cone while Calum Dan was broadsides in the Transit!”

Keith commented on Twitter: “So it turns out I’m an award-winning video creator along with my best pals.  Worth risking my life after all.  Very proud indeed.”

Peat & Diesel added: “We are delighted to have also been nominated for Album of the Year, too, but it was a tough category and Hamish Napier Music won it hands down with ‘The Woods’ so well done and very well deserved!!

“A massive thank you to everyone that supports not just us, but all the other musicians, it means the world and hopefully next year we will all put on a real good session to show our appreciation to you all because that’s the way we do it in the Western Isles!!

Graham Collins, of Threads of Sound, said: “We’re delighted to continue to support the MG ALBA Scots Trad Music Awards in this strange and challenging year. The new Trad Video of the Year Award recognises how important online video has been for connecting artists with their audiences this year and we congratulate all the nominees for the this and all the awards.”

Hands Up for Trad’s founder and Creative Director Simon Thoumire said: “The arrival of Covid-19 has required a massive change for us all, impacted in so many different ways, and I want to thank MG ALBA and our sponsors, the artists and musicians and crew and everyone who voted.

“Everyone has worked together tirelessly to maintain, pivot and bring our music programme online right through this year, culminating in last night’s fantastic BBC ALBA broadcast of the Na Trads 2020 programme of our annual MG ALBA Scots Trad Music Awards, the pinnacle of our year.”

Christine Halsall, Youth Music Initiative Officer at Creative Scotland said: “Throughout this difficult year Hands Up for Trad has brought the very best of trad arts to the living rooms of audiences across the world and supported artists in the sector at an unprecedented time. This year’s Na Trads is a very welcome celebration of the fantastic talent and rich variety that exists across the sector, and it’s fantastic to be able to join the festivities from afar via BBC ALBA.

Daibhidh Boag of Bòrd na Gàidhlig said: “We are proud to support this award once more and on behalf of Bòrd na Gàidhlig, I congratulate and thank John Smith for his dedication to the language through his work in television. His contribution to Gaelic culture has been invaluable and he continues to be an inspiration to young Gaelic speakers with his work at Sabhal Mòr Ostaig in Skye.”

The series of Cèilidhs hosted by Comhairle nan Eilean Siar lost out in the Community Music Project of the Year, sponsored by Greentrax Recordings, to ‘Tunes in the Hoose’ – an online community created to keep Scottish musicians playing together at a time when opportunities are uncertain.

The group reacted on social media: “ We share this award with ALL of you, our supporters, followers and most of all, our contributing musicians! It is all thanks to your time and endless talent, that over three million people have been able to enjoy countless hours of Scottish music from kitchens to living rooms around the globe.

“We are honoured to have played a part in uniting musicians from all walks of life throughout this challenging year.

“Stay tuned for our Ceilidh in the Care Home on Monday at 7pm, where we will be delivering a virtual ceilidh to every registered care service in Scotland. Join us in wishing a very merry tune-filled Christmas to those who deserve it the most.”

The list of contenders was: Campbell’s Ceilidh; Tunes in the Hoose; MacGregor’s Live at Five;

The Gaelic Singer of the Year, sponsored by The Highland Society of London, was Fionnag NicChoinnich (Fiona MacKenzie)

Duncan Byatt, President of the Highland Society of London, said: “The Highland Society of London is delighted to continue our sponsorship of the Gaelic Singer of the Year Award at the 2020 MG ALBA Scots Trad Music Awards. Music continues to be an important factor in lifting spirits and supporting communities during this difficult year, and we are extremely grateful to Hands Up For Trad and BBC ALBA for (amongst their many other fantastic initiatives) providing this platform to recognise so many creative and inspiring musicians – particularly those that perform in Gaelic.”

“It has been incredible to witness the adaptability and resilience of many musicians, skillsets we actively impart to our students, and we value the role of this event MG ALBA Scots Traditional Music Awards, in bringing together organisations across music in Scotland to support the development of and recognise the work and talent of our musicians.

“It’s been wonderful to watch the incredible dedication Tim Edey has demonstrated to his art and to his worldwide audience during lockdown. Tim has inspired and soothed so many people with his warm and welcoming online performances – he is a wonderful ambassador for music. Congratulations to Tim Edey”.

Ealasaid MacDonald, Director of Strategy & External Affairs at title sponsors MG ALBA, which operates BBC ALBA in partnership with the BBC, said: “Once again, the Trads has showcased the best of creativity and talent across Scotland.

“MG ALBA would like to congratulate all those who have taken part, those nominated and the winners, as they have been part of a very different year where music has been an essential part of all our lives. We are delighted that Hands Up for Trad has brought us all together for this wonderful opportunity to celebrate the best of traditional music.”

Organising body, Hands Up for Trad funded by The National Lottery through Creative Scotland, was formed in 2002 and exists to increase the profile and visibility of Scottish traditional music through information, advocacy and education to artists, participants, and audiences.