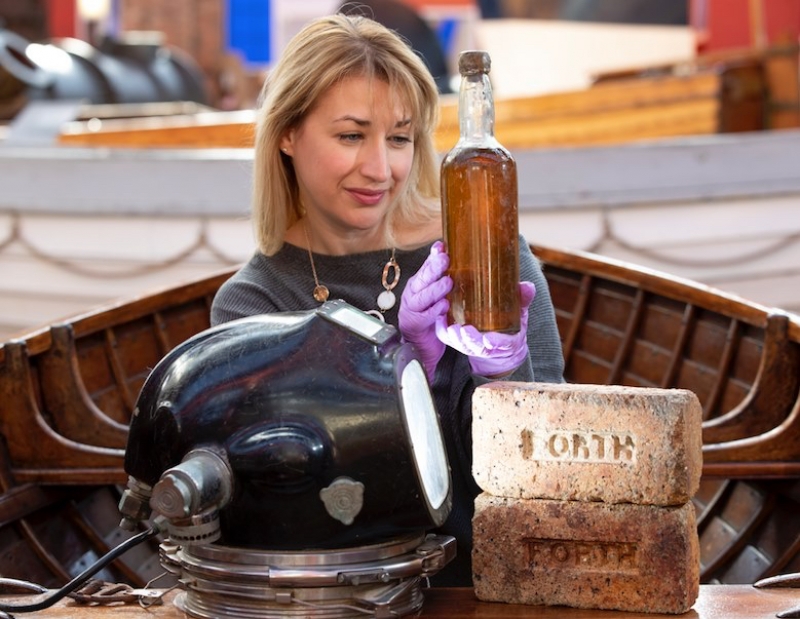 A bottle of whisky salvaged from the sea-bed in the Sound of Barra is to be the centrepiece of an exhibition exploring alternative views of smuggling.

The relic from the 1941 wreck of the SS Politician, off Eriskay, was lifted from the seabed in June 1987 by Orkney diver George Currie, after he had completed a contract laying a subsea cable between Eriskay and Barra.

The unlabelled bottle was successfully bought online by the Ayrshire-based Scottish Maritime Museum, with the support of the National Fund for Acquisitions. They paid £9,200 at auction for the unlabelled bottle, which is believed to be ‘undrinkable’.

Announcing the acquisition last week (Thursday 12 November) museum director David Mann said: “This bottle of shipwrecked whisky may be small in size but the colourful story behind it provides us with a powerful and enthralling link with our cultural and social maritime past.

“It will play a leading role in helping us tell the stories behind the collection and exploring our social and cultural relationship with the sea with visitors.”

The SS Politician went aground off Eriskay in 1941 with a rich cargo, including Jamaican banknotes, tobacco, bicycles – and 264,000 bottles of export-quality whisky bound for the USA.

The drama of how islanders came to ‘rescue’ large quantities of the liquor was fictionalised by author and Barra resident Compton Mackenzie in his 1947 novel Whisky Galore. An Ealing classic film of the novel, filmed in Barra, was released in 1949.

The bottle purchased by the museum is believed to have come from the cargo of the real wreck. It will initially go on show in the Scottish Maritime Museum’s Boatshop exhibition space in Irvine, where it will be free to view.

In 2023, it will feature in the museum’s Smuggling and Swashbuckling exhibition, where it will help stimulate conversation around alternative views of smuggling.

Abigail McIntyre, senior curator at the Scottish Maritime Museum, said: “We are thrilled to add this bottle of whisky, which has become so embedded in Scottish island folklore, to the collection.

“There are so many fascinating topics we can explore with our visitors through it, from island life during the war period and underwater archaeology and recovery, through to challenging our understanding and portrayal of smuggling in Scottish waters.

“The wreck of the SS Politician had a profound effect on the life of the islanders of Eriskay, many of whom felt keenly the injustice of being prosecuted. As well as looking at the impact of the shipwreck generally, we will also explore maritime laws and their implications through this wonderful new artefact.”

The picture shows Abigail McIntyre with the whisky bottle and other items included in the auction lot (Scottish Maritime Museum).