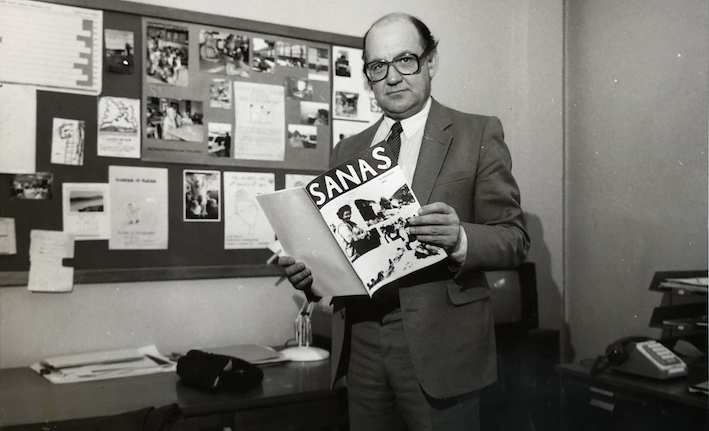 The name Dr A. W. Wood probably will not mean a great deal to most islanders, but during the 1970s and 1980s he was responsible for directing grant aid totalling £0.5 million to the then embryonic Comhairle nan Eilean. This was to fund community development throughout the Western Isles, a project called Proiseact  Muinntir nan Eilean, but often known colloquially as  the “van Leer project”.

Dr Wood, or Fred as he was known to family and friends, was born in Newcastle  in 1938 but moved with his parents to live Portsoy when he was aged four. He graduated from Aberdeen University, followed by the Institute of Education and the School of Oriental and African Studies (SOAS) in London. This was followed by a spell teaching in Uganda where the future President of Uganda, Yoweri Museveni was one of his students.

In 1970 he moved to the Netherlands to become Director of Education for the Bernard van Leer Foundation. This is an independent education foundation, based in The Hague. It derives its funds from a trust set up in 1949 by a Dutch inventor and entrepreneur, Bernard van Leer.  Since 1965 its mission has been to improve opportunities for children from birth to age-8 growing up in circumstances of social and economic disadvantage.

Although working in Holland and often travelling the world, Fred never forgot his Scottish roots. In 1975, following local government reorganisation and the creation of the Western Isles Islands Council, later Comhairle nan Eilean Siar, he made contact with the then Scottish Education Department and arranged to visit Stornoway with two HMIs, Duncan Kirkpatrick and Alan Small. There he met Angus MacLeod, then the Director of Education and Dr Finlay MacLeod, the Primary Adviser. From that meeting was to emerge a personal relationship between Fred and the Western Isles that lasted 45 years.

Fred’s background led the Foundation to support other Scottish initiatives; in the Torry district of Aberdeen in partnership with the University of Aberdeen, and in Priesthill, Glasgow, together with Stratchclyde Regional Council. All three Scottish projects shared a common objective; to improve early childhood experience in areas of social and economic disadvantage.

Fred became a regular visitor to the Western Isles and was interviewed in 1986 by John Murray for Radio nan Eilean in their Rosebank, Church Street studios. He drew attention to the work of the van Leer project, supporting over 50 parent-led playgroups from the Butt to Barra, as well as the encouragement provided to parents to become more actively involved in their children’s education. One such initiative was the Western Isles first Gaelic-medium Primary One class in 1984 in Breasclete Primary, set up with project support to the Comhairle’s Education Department. Although not a Gaelic speaker, Fred considered this to have been an especially important development.

Fred left the Bernard van Leer Foundation in 1991 to become Director of the United States Save the Children Fund, but returned regularly to his old home in Portsoy until his death, aged 82 in June this year.

He left behind him a legacy of innovation and ideas that continue to this day.

Fred was married to his wife Susan for 59 years and is survived by her and their family.