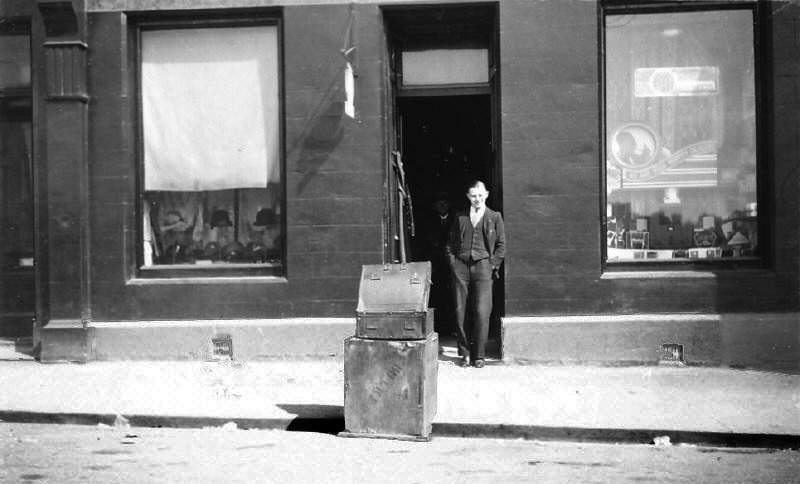 Stornoway’s history detectives have placed the last piece into a family history mystery that spans 80 years and both sides of the Atlantic.

The final thread of evidence sews up a case which started when bad weather stripped the shingles from a mid-20th century country colonial house, with a farmhouse-style porch, in Silver Spring, Maryland, USA.

Among the 80-year old structural timbers revealed, a plank of wood carried the name of Jack Morrison, who’d signed his name in pencil, together with the address ‘Stornoway, Isle of Lewis’ and the nickname ‘Jernie’.

Householder Scott Elliott and his family wanted to know more about ‘the house that Jack built’, so he contacted Stornoway Historical Society (SHS) and asked if they could help.

Their initial response wasn’t that encouraging, said Scott: “William Foulger's first email to me stated this was a classic needle in a haystack.”

But solving the seemingly impossible wasn’t going to put William or his fellow historians off. Key clues were in Jack Morrison’s nickname and the date he’d added to his signature – November 1940.

While the Stornowegians were digging in the archives, on 22 August a social media appeal went out and almost immediately struck gold. 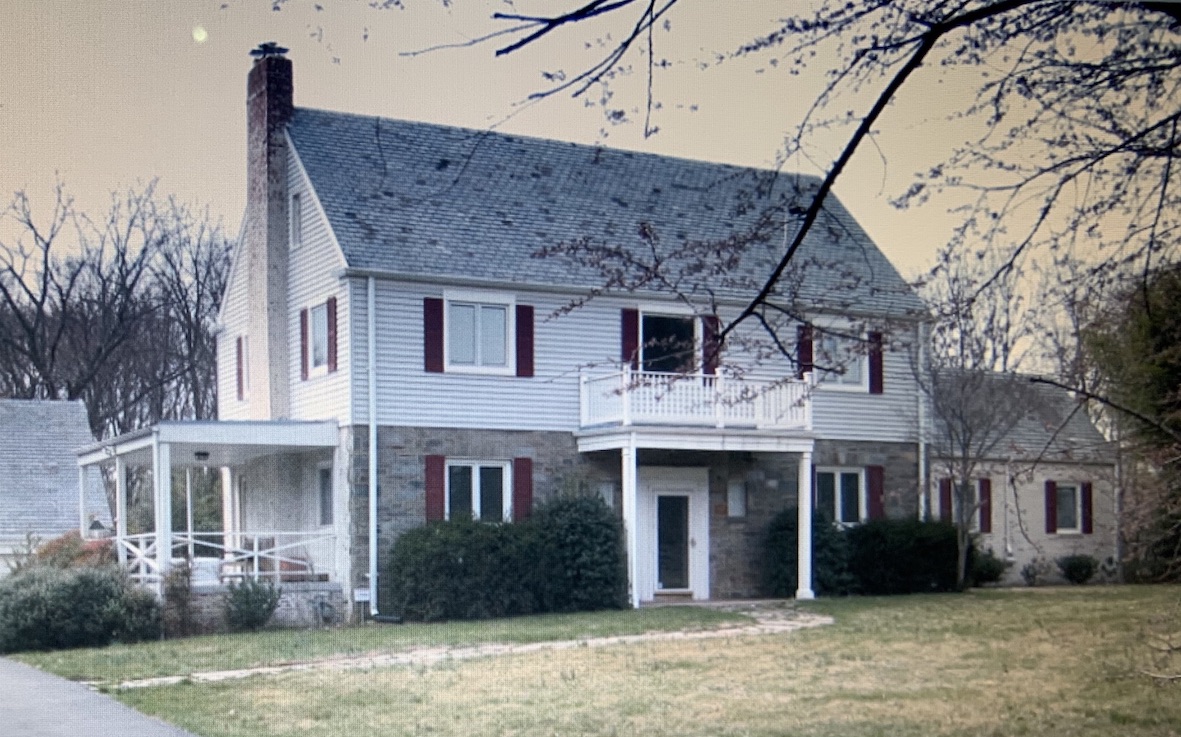 Stornoway-born Gordon Morrison got in touch to say that his uncle John was a carpenter who emigrated to the USA in 1920 – and who had the nickname Jernie.

Gordon told SHS: “We never knew him to be called Jack, but he may well have been called this in the states. By 1940 he had a number of jobs – foreman painter in a large New York hotel, gardener, horse groom and chauffeur to a New York newspaper editor.

“He was a great raconteur, but never mentioned Maryland in the stories he told my brother and myself. The clincher would be a copy of his signature, but neither my brother Jack nor I can find one.”

Gordon’s Uncle John was brother to Donald Duncan Morrison (Hilton) who with his brother founded D D Morrisons, the radio and TV shop at 61 Cromwell Street, where the Good Food Boutique is now. Their family history – courtesy of Stornoway Historical Society – is below. 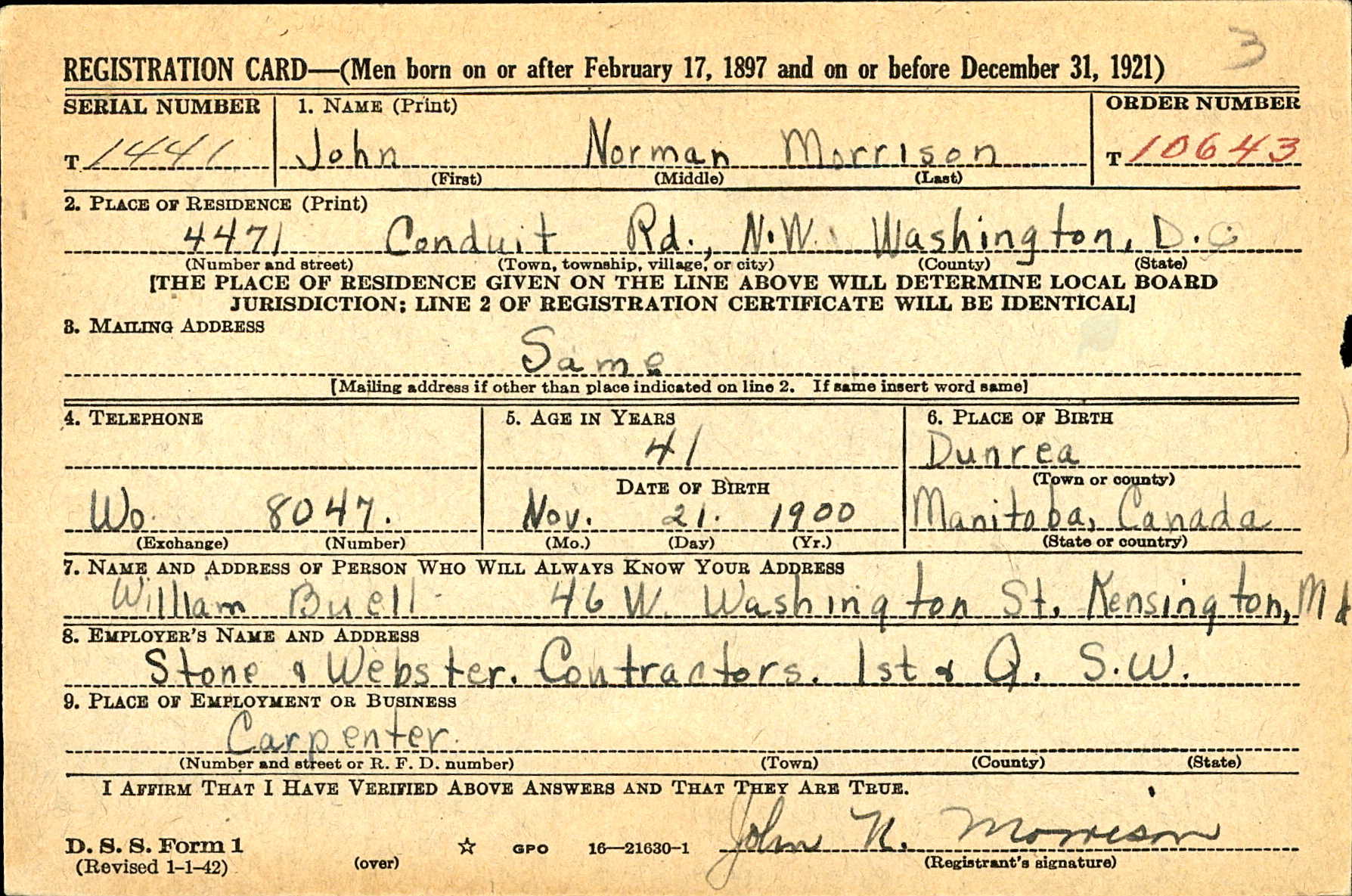 The puzzle remained of why a Stornoway cove who had emigrated to Pennsylvania and worked in New York was apparently up a ladder in Maryland in November 1940.

On Tuesday (1 September) nephew Gordon Morrison, now 76, came up with the answer to that final question.

He wrote to SHS: “A friend has accessed the American 1940 census and also obtained Johnnie's WW2 draft card, which confirms that he lived in Washington DC, not far from the house in Maryland, and worked as a carpenter for a local company.

“The record contains a copy of his signature. We can now be absolutely sure that it was him.”

Scott and his family are highly satisfied with the outcome of the Stornoway detective work and value their link with the island community where Jernie the carpenter originated.

Scott said: “The writing was safely concealed under clapboard for 80 years and looks like it was signed yesterday. Thankfully my brother noticed the writing on the plank, it could have been entirely missed and wound up in landfill. We treasure the plank and it resides downstairs where we can see it every day.

“Naturally I was gratified at the interest it generated. We've learned Stornoway is a vibrant community and we have great respect for the Historical Society. We applaud their decision to elevate a minor inquiry to a matter worthy of research.”

The quiet workers of SHS themselves are characteristically modest. They said: “The Stornoway Historical Society exists to record the heritage of Stornoway and district. It also wishes to assist members, islanders and visitors with queries they may have about the area we represent.

“In this instance, we are delighted to participate in some detective work so that we have been able to identify a Stornoway man who left his mark in the USA 80 years ago.”

George (b1863, d1948) organised a group of 17 Lewis families and three Harris families to emigrate to Canada in 1889. He married Mary (née Macdonald, b1868, d1911) at Killarney, Manitoba, Canada in 1892 and they had seven of a family, the first five born in Canada into a Gaelic-speaking community.

George was a farmer in Canada and returned to Lewis in about 1905, then opened shops, first in Back, then in Stornoway. After his wife Mary’s death in 1911, he remarried in 1912, to Margaret Murray from Barvas.

By 1930 the family lived above the shop at Cobden House, 61 Cromwell Street and the general merchants became D.D. Morrison and Co when it changed to a radio dealer's shop upon George’s death in 1948.  Both Donald John (Audie) and Donald Duncan (Hilton) worked in the shop.

The two youngest sons were radio officers in the Merchant Navy. Neil was a prisoner of war from 1940 to 1943, when he was repatriated.

Daughter Jean (Jennie), who died of heart trouble in 1920, compiled a book of recipes which is in the collection of Stornoway Historical Society.