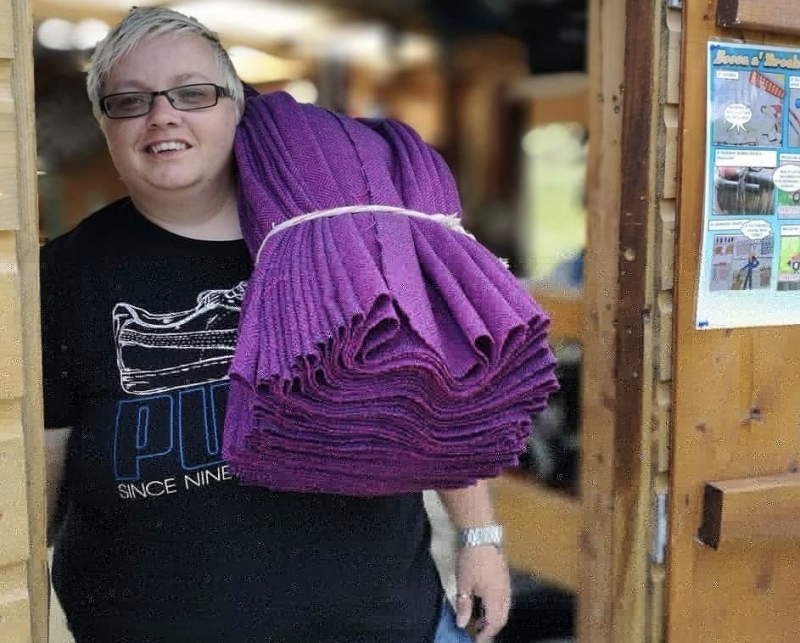 A Harris Tweed weaver has described herself as ‘overwhelmed and speechless’ after the community rallied round to help her recover from the destruction of her new weaving shed.

And Rebecca Hutton of Taobh Tuath Tweeds watched with incredulity today (Monday 24 August) as a fundraiser set up to help her recover galloped past its £4,000 target – just 18 hours after launch.

Rebecca had taken time during lockdown to build a brand-new weaving shed on her family croft in Northton, Isle of Harris. She’s been working in her old shed after having to take time off with a suspected case of Coronavirus earlier this year, which left her in a weakened state.

But she rallied to start the new building as a lockdown project, while tourists were not able to call in and listen to her distinctive introduction to the craft and history of Harris Tweed weaving.

With just a few finishing touches to be applied, she was due to move her loom into the new shed this month and to be settled ahead of winter. Then, in the early hours of last Thursday morning (20 August), disaster struck.

Rebecca said: “I knew there were gales forecast but I didn’t have any particular concerns. It was windy overnight and at about 2am there were some fierce gusts. One of them must have blown the door in and, once the door was open, it just lifted the roof off.” 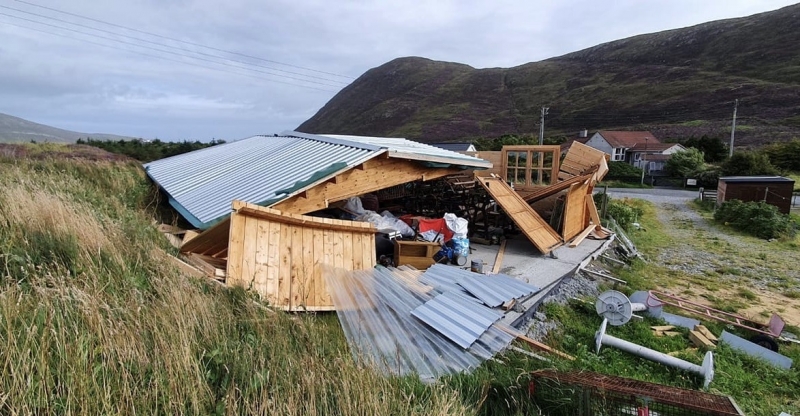 The scene of devastation the next morning was documented by neighbours, many of whom were immediately in action helping Rebecca to tidy up and make the place safe.

Rebecca said: “On Thursday people helped me to get the yarn out, tidy up and get the rest of the roof down so that it was safe. A couple of people handed me cheques to help with the costs of rebuilding and that left me speechless.”

looking for £4,000 to finance rebuilding costs and get Rebecca back on her feet.

They said: “Following a freak wind the other night Rebecca Hutton's brand-new tweed making shed was destroyed. She had saved for years to pay for it and then spent the last few months erecting it.

“The day before she was going to move her equipment in, it was destroyed by the Harris version of the beast from the East. As a community could we each donate a few pounds, it would help her replace it and keep one of Northton's larger than life characters happy....Tapadh leibh!”

The response, says Rebecca, has been extraordinary. She said: “Genuinely, I am speechless, and people who know me will know that doesn’t often happen. I was overwhelmed at the destruction of the shed and now I am overwhelmed with everything that has happened – with people’s response and when I see what has been raised.

“I just can’t believe how kind and generous everyone has been. With everything that has gone on this year it shows that community is still here, underneath the moaning and complaining we do care about each other.

“I really do want to say how grateful I am to everyone – not just for the donations, but for the help and for the kind things people have been saying. Overwhelmed. I am just overwhelmed.”

Pictures show Rebecca at the door of her old shed and the scene of destruction on Thursday morning – her old shed can be seen to the right of the picture (Rebecca Hutton).