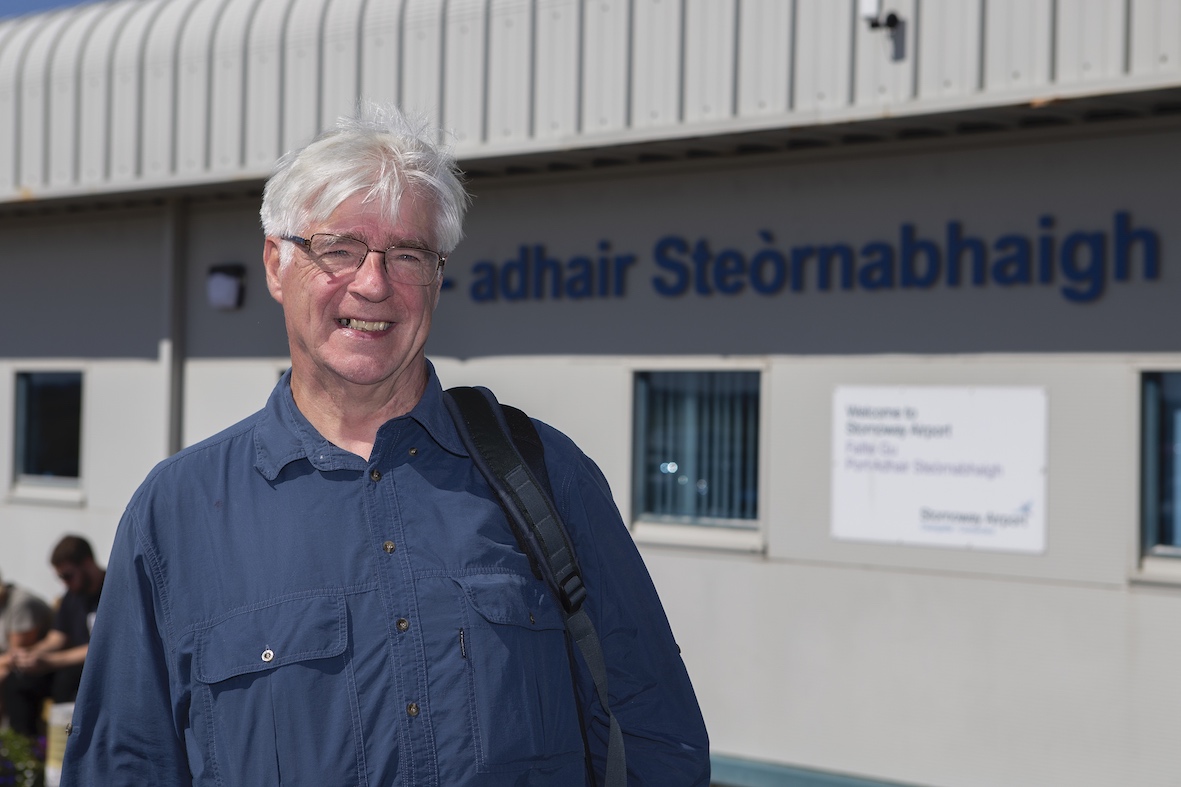 Point and Sandwick’s community consultant, Alasdair Nicholson, was yesterday (Tuesday August 11) making a second attempt to travel to Africa, armed with island football strips for youngsters and lessons on community resilience and crisis response for people working in development.

Alasdair, who works as a consultant for community wind farm organisation Point and Sandwick Trust, had been due to fly out from Edinburgh on March 18 but put off his trip due to deepening concerns over the coronavirus pandemic. However, that trip is now back on and he left Stornoway on Sunday (pictured at Stornoway Airport by Sandie Maciver).

Alasdair will be taking with him a bundle of junior Point FC strips, as well as science textbooks, to deliver to a school at the foot of Mount Kilimanjaro. He is taking the strips out to Northern Tanzania after Point and Sandwick Trust sponsored new kit for the young Point players. Point and Sandwick Trust also provided a couple of footballs for the school, a combined primary and secondary.

Alasdair said: “Essentially, after considerable delays, certainly more than 90 days, the airline suddenly offered me a replacement ticket. So I checked that Tanzania was back open for business and got a visa from the government. So I’m making my second attempt, travelling of course with all the appropriate safeguards including facemasks, wipes, sprays, and disposable gloves. Their schools are back, so I hope to be able to deliver the books and and also the football strips at an early point.”

Alasdair will be in Africa until mid-September and hopes to be able to climb Mount Kilimanjaro during his trip. “I’m looking forward to it immensely,” he said. “It was disappointing to have to cancel right at the last minute last time.”

Alasdair has been travelling to Tanzania regularly since 2015, primarily to help develop local skills in community enterprise. He will be renewing acquaintances, including people working in ecotourism who are interested in the progress of projects such as the Point and Sandwick Coastal Community Path, but Alasdair stressed the trip was being made in a personal capacity.

“It’s a personal connection rather than an official connection but if you take projects that Point and Sandwick Trust promote, like the coastal path, that’s all about building capacity in Point and Sandwick. It is a development that relates to ecotourism and the people that I’m involved with in Africa are very much youth-led, cultural and ecotourism.

“Once we get over the coronavirus and other thing get back into play, then these things will be important in terms of building community resilience and are part of community empowerment and community-led development, which we’ve seen are highly critical and are highly important to both sustaining livelihoods and developing a better community. These are the broad themes that are common to both areas (in the Hebrides and Tanzania).”

Alasdair has 30 years’ experience of community development and social enterprise and gives workshops in Africa on community enterprise, entrepreneurial skills and empowerment, with examples from Scotland to inspire the Tanzanians.  Alasdair has been busy on Point and Sandwick’s community pandemic response over the last few months. He secured the Scottish Government funding that enabled Point and Sandwick Trust to provide a package of community support, including freshly cooked meals for the vulnerable, a grocery delivery service and befriending.

He said: “The good thing about it has been the pool of volunteers; there are over 40 involved across the two projects. I think that’s quite impressive actually and I think we would want to be able to see some of that continue so that, for future health crises or future concerns, people could be brought back together again in some form.”

Alasdair added it was “critical” to have a local community response – of adaptability, capability and resilience – to “whatever black swan event” might happen in the future.

He said: “People have come together and have worked hard as a team to overcome some of the problems that have existed and I think it’s a strength of the Point and Sandwick community that they have risen to that challenge.”