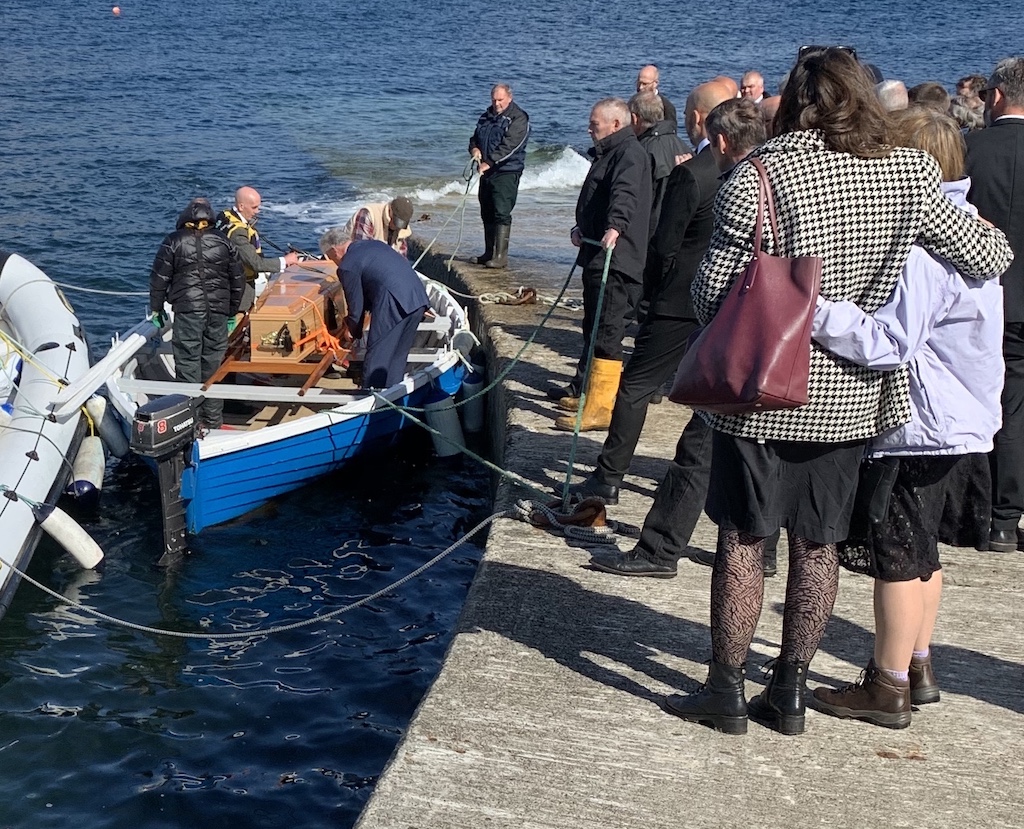 Donald John MacInnes liked the fact that when the telephone arrived on Scarp in 1947, the first call was to intimate his birth. Last Saturday (August 8) was the anniversary of both events but it proved to be the day when Donald John was laid to rest on his native island.

On a glorious August morning, the funeral party made its way from Hushinish on the Harris mainland.  The graveside service reflected Donald John’s love of the sea, love of Scarp, love of family, love of life.

There was a Gaelic psalm and a rendering of Chi mi’n Tir.  His wife, Jill Farrell, added her own beautiful, impromptu tribute. Everyone agreed it was an exceptionally fitting send-off, of which Donald John would have thoroughly approved.

He was born to be a crofter, sailor and Eurocrat, an unusual combination which he straddled with equanimity.  As chief executive  of Scotland Europa, he was exceptional in both personality and effectiveness, prising open European funds and charming his way through corridors of power.

Donald John was the son a fisherman who, like many of his generation, often had to labour on the mainland in order to maintain his family at home; in Angus MacInnes’s case, building the Lochaber pulp mill in the 1960s.  By then, Scarp was on its last legs as a viable community.

By 1971, Scarp’s depopulation was complete and Donald John’s family was the last to leave the island.  As recently as 1950, there had been a population of 74, spread over 19 households but the constant struggle for basic services took its relentless toll. 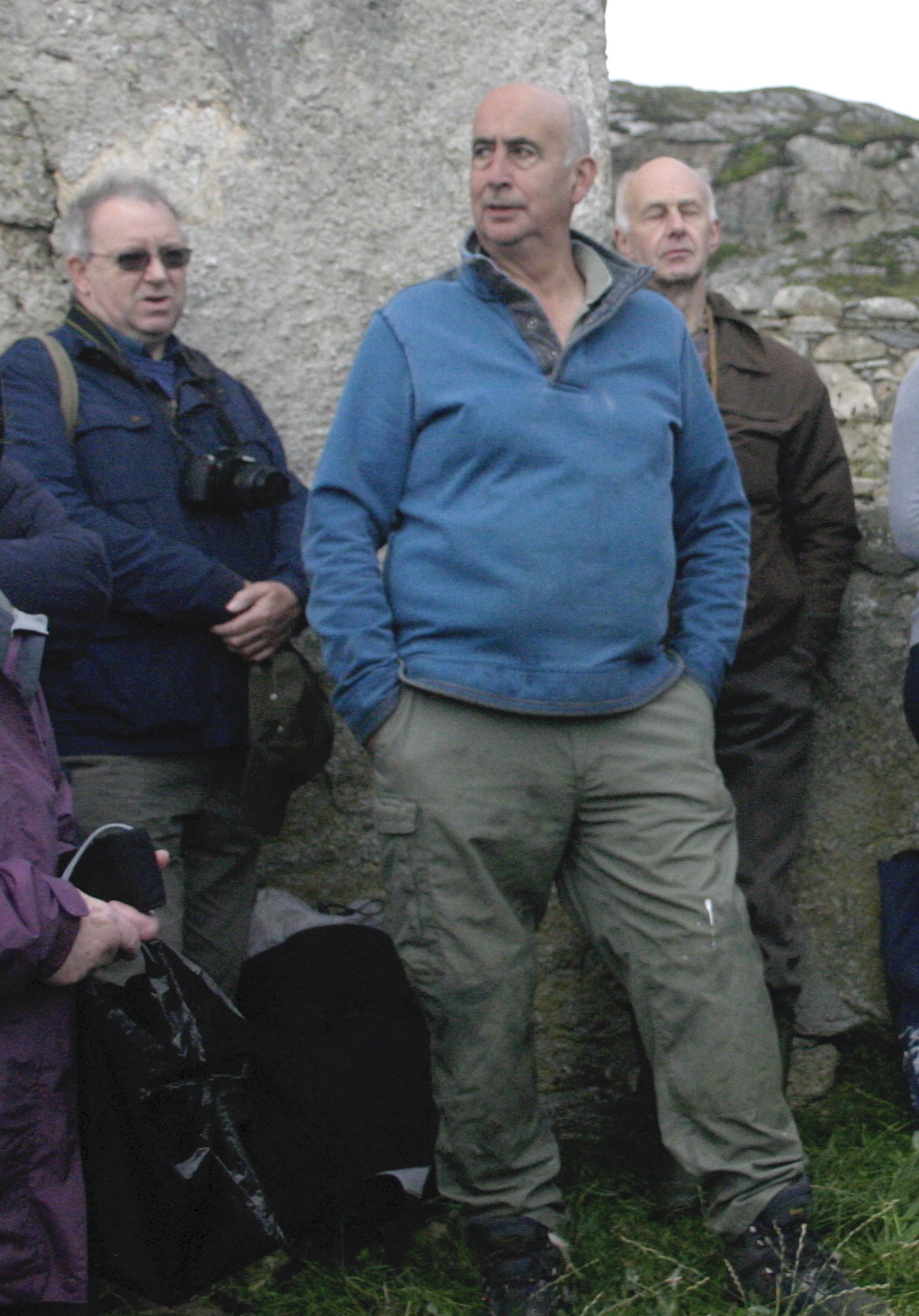 Donald John had completed his schooling at Inverness Royal Academy and went on to graduate in economics at Strathclyde University, following up with an MBA.  His first employment was with the Burnley Building Society but his ambition was to combine business acumen with his island pedigree.

He was involved in the early days of salmon farming in the Western Isles but the industry had been structured in the interests of large multinationals rather than small local enterprises, most of which were taken over by the big players.

In 1986, he joined Strathkelvin Enterprise Trust and that set his future career path.  When the enterprise network was reorganised, Donald John became chief executive of Dunbartonshire Enterprise and made a notable success of that role, winning investment and jobs for the area.

I first met him under quite funny circumstances.  A group of us had gone out from Uig area to Hamnaway to catch a few salmon (not that I was much help).  Coincidentally, a group including Donald John had approached from the Harris direction for the same purpose.

To the frustration of both parties, there were a couple of respectable Stornowegians in a boat, fishing by more legitimate means. Nothing could happen until they departed, leaving plenty time to discover that we shared common views on what should be done to support Scotland’s most peripheral communities and cultures.

In 1997, I became the pre-devolution Scottish Industry Minister with a short timescale to put some of what we had talked about into action.  I asked Donald John to write a report  which would provide the concept with third party credibility. The civil service did not like their administrative “silos” being disturbed.

I never saw a report and complained to Donald that while respecting his attachment to the oral tradition, it would be nice if he occasionally wrote something down.  However, he steered it through the civil service to create Iomairt air an Oir – the initiative at the edge, based on six pilot areas, including of course Harris and Uig.  It did good work until the silos reasserted themselves.

This involvement contributed to his appointment the following year as Chief Executive of Scotland Europa.  Hitherto, the organisation was an alliance of business organisations and local authorities but we now made it an arm of government so that Donald John became Scotland’s de facto ambassador in Brussels.

In a press profile at the time, it was put to him that his emergence was being spoken of darkly in some quarters as evidence of a “Gaelic mafia”.  Donald John replied: “I’d love to find a Gaelic mafia. We need one desperately”.

Whenever he could be of help to the islands, his influence was at their disposal. The current council convener, Norman MacDonald, recalls an occasion when there was an issue about EU cabotage rules affecting island ferry services. They went to Brussels and found themselves before the EU Commissioner, thanks to Donald John. As far as the Scottish islands were concerned, the issue was never heard of again.

His great strengths were as a networker, delegator and encourager.  He could give master-classes in opening doors for others to pass through. His sociability and humour made him a star in the Brussels firmament but anyone who underestimated his sharpness of mind was making a big mistake.

Whatever he was doing, Donald John always found time to return to his home in Govig while Scarp itself is still used for grazing.  He modestly referred to himself as “the king of Scarp” and his knowledge of the island and of neighbouring Harris communities is irreplaceable.

He was full of ideas and his commitment to the island economy never wavered. When I needed some local investors in Harris Tweed Hebrides, he was one of the first to come forward. More recently, he was a huge supporter and encourager of Scarp’s current owner, Anderson Bakewell, when he mooted the idea of Harris Distillery, now a great success.

Hugh Dan MacLennan, who is co-writing a book to mark the 50th anniversary of the island's evacuation, says there are now only 17 people left who were born on the island.  Its lesson lives on as Scarp was no St Kilda and there was no need for it to die. Sadly, there are many other places "air an oir"  where the same processes of avoidable decline continue.

Donald John died suddenly while on the Harris hills gathering sheep.  He married Jill in 2006 and they formed a great partnership,  enjoying life to the full in Glasgow, Harris or the high seas.  He is also survived by the four children, Jane, David, Paul and Jon, and nine grandchildren by his previous marriage to Catherine; his youngest son Callum and his last surviving sibling, Seonagh, who is in Oban.

Lucas MacInnes, his eldest grandchild, read a poem at the graveside; an adaptation of The Boat by Raymond Carver. In Donald John's ideal after-world, "there’ll be a place on board my Boat for everyone’s stories…the true and the made-up, the ones already finished and the ones still being written".