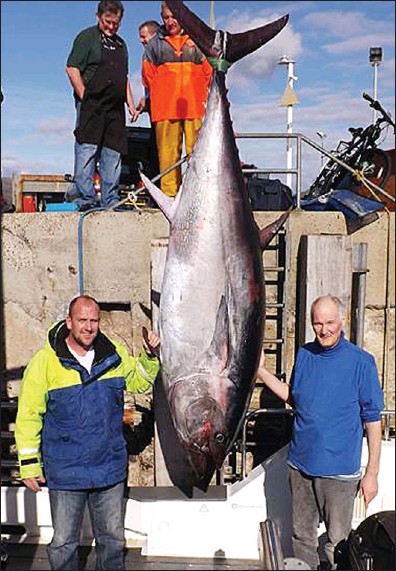 Harris Development Ltd, the community-led agency that develops, promotes and supports the Isle of Harris, has been successful in obtaining derogations for three vessels to fish for bluefin tuna in waters off the Western Isles.

A derogation allows a vessel to be exempt from fishing laws for the purposes of carrying out scientific research. This means that vessels will be able to fish for tuna, as long as those caught are tagged and released.

The sport aspect of catching the giant fish on a rod is already attracting interest. HDL says that the vessels to be granted the licences are still being finalised and that the opportunity to take paying anglers aboard the trips will be subject to Covid-19 restrictions.

Under EU legislation, which continues to apply for 2020, no commercial UK vessels are authorised to land catches of bluefin tuna and any such fish caught by any UK vessel must be returned to the sea, alive and unharmed to the greatest extent possible.

This year’s scientific programme will complement similar work being carried out by other European coastal states. It follows the granting of the first licenced fishing of bluefin tuna, which started in Harris in October last year.

Angus Campbell’s fishing vessel Harmony then received a derogation to allow the fishing, in conjunction with the University of Exeter’s Thunnus UK research project and the Centre for Environment, Fisheries and Aquaculture Science (CEFAS).

Angus Campbell was the Harris fisherman who first caught a bluefin tuna in the waters between Harris and St Kilda in September 2013. The 9-foot long fish, which did not survive the catch, reportedly weighed 233kg (515lb).

Scientists are researching the ecology and distribution of the Atlantic bluefin tuna after the huge fish began to appear around the islands with rising sea temperatures about eight years ago.

Similar research projects are taking place in the Celtic Seas around Ireland and in the Skagerrak, between Denmark and Sweden.

Both have been tagged in the North Atlantic during earlier research projects. Tagging is considered extremely important because it can provide better estimates of natural mortality rates, growth, habitat utilisation and migration patterns.