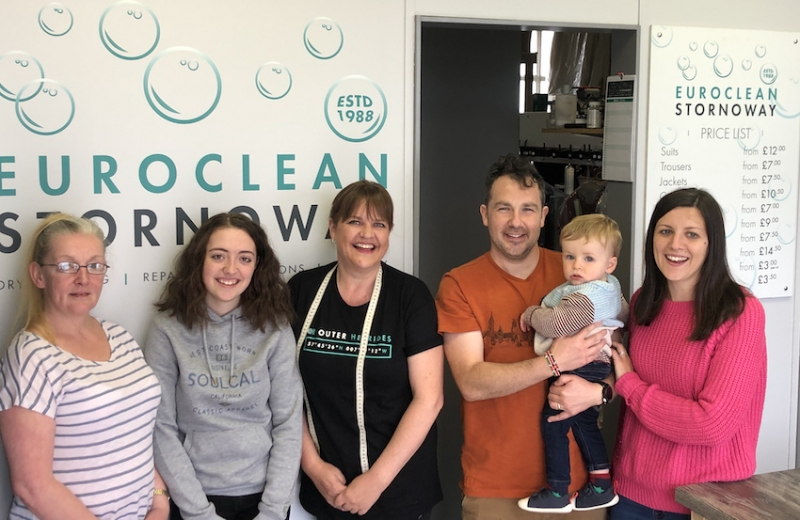 When Louis Shields announced in 2018 that he was going to retire after 30 years running Stornoway’s only dry-cleaners, Euroclean on James Street, there were shockwaves around Lewis.

People wondered how the town was going to manage without a dry-cleaners – who would deal with the massive loads of bedspreads and duvets? Who would get best wedding suits and special occasion dresses clean and who would take up, let out or take in ill-fitting clothing?

Louis himself had a message for a would-be successor as he embraced the idea of retirement. He said: “There’s definitely an opening for someone, it would be great to see someone new come in, with new ideas, to cast a fresh eye over the place. I would hate to see the place shut down.”

Neither Louis nor his thousands of anxious customers could have imagined what a family affair the succession would turn out to be. Son-in-law Willie Macrury had a job at Macaulay College and a house to do up, with a new baby soon to be born to his wife Marsaili. He certainly wasn’t expecting to step up to the business challenge.

But, says Willie, things seemed to fall just right for him to take over – initially only on a temporary basis. “I had given up my job to do up the house just as Euroclean was closing and I realised that, with the demand for the service and the family involvement, I would probably be doing the work anyway, so I stepped in.

Willie finally officially bought the business on 1 September last year, and his attitude to running the company is exactly what Louis was hoping for. He’s brimming with new ideas, yet keen to keep the ethos of reliability and service that Euroclean was always known for.

The first thing customers will notice is a fresh new look to the place. Willie said: “We have new signage, a new logo and have done up the shop front so it all looks bright and fresh.

“The biggest change, though, is in the cleaning system we use. All our equipment has been replaced and we now use the Electrolux Lagoon cleaning system. It’s the first water-based professional cleaning system to be approved by The Woolmark Company and it helps protect the environment, using no toxic solvents.

“All detergents are biodegradable and the whole process of cleaning is chemical-free. The machinery itself is top-of-the-range, the highest specification cleaning machinery you can get.”

Installation of the new system was a saga in itself, with fitters due to do the work in March. Obviously lockdown intervened and the system has only just been installed at the beginning of July.

The company stayed open all through lockdown, classified as an essential service and continuing to provide clothing and laundry-cleaning for key workers. But it was a lonely time for Willie, who staffed the shop single-handed throughout lockdown.

He said: “For the first three or four weeks of lockdown I was fully open, then I reduced to half days as demand dropped and spent the rest of the time doing the jobs on the house and garden.”

Throughout lockdown, there was never a day without customers and back on full-time hours, the shop has never been busier.

Accommodation providers are looking for their bed-linen to be completely refreshed to prepare for post-Covid regulations and, with weekend changeovers, key-worker clothing and service washes for individuals the staff of four are fully occupied.

Post-lockdown Euroclean is the best of both worlds – new and fresh, with top-class equipment and a new management team, but continuing a family tradition too.

One familiar face is that of seamstress Carol Maciver, who has worked at Euroclean since Louis opened the doors in 1988. She’s returned for three days a week to do repairs and alterations. Marie McCallum and Willie’s mum, Carolyn Macrury are also in the team, along with part-time worker Sophie Graham.

Oh, and one other familiar face… “Louis still comes in almost every day,” laughs Willie. “It’s handy, but I might have to tell him to go home eventually.”

The picture shows all the team with new business-owner Willie Macrury and his wife Marsaili and baby son Niall, just turned one year old.