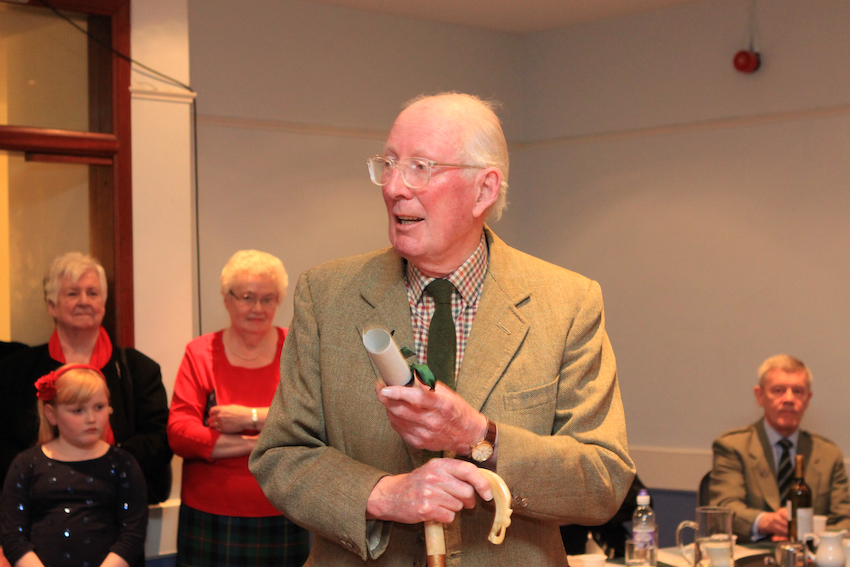 Mr Fleming’s sponsorship of the competition ran for eight years before community wind farm organisation Point and Sandwick Trust took over in 2017.  Mr Fleming attended the competition every year that he sponsored it and was awarded Honorary Life Membership of The Lewis and Harris Piping Society in 2013.

Dr John Smith, chairman of The Lewis and Harris Piping Society, said: “Members of The Lewis and Harris Piping Society were saddened to hear of the recent death of Robin Fleming. Mr Fleming was a most generous sponsor of The Donald MacLeod Memorial Competition at a time when the Society were struggling to find sponsorship to maintain the competition in Stornoway. He was a charming, polite and unassuming character, totally unostentatious.

“He originally undertook to sponsor the competition for five years but continued for another three because we were struggling to find another sponsor.”

Dr Smith said: “His very generous sponsorship meant that the competition survived in Stornoway, its natural home, and with PST’s continuing support, despite lockdown and pandemics, we are very hopeful that the competition will survive, although perhaps not in its customary form, this year.”

The P/M Donald MacLeod Memorial Piping Competition was set up to commemorate the musical legacy of one of Stornoway’s most famous sons. Donald MacLeod MBE (1917-1982) was a celebrated piper, teacher and one of the most gifted and prolific composers of piping music ever.

The competition is an invitational one, featuring eight of the current best pipers in the world, based on their performances at events during the year on the piping circuit. It has been held in Stornoway since it was set up as a ‘living memorial’ in 1993 but there were fears it would have to be moved to the mainland to save costs before Mr Fleming came on board, following the withdrawal of headline sponsorship by Tennent Caledonian Breweries.

Mr Fleming was chairman of Robert Fleming & Co, the merchant bank founded by his grandfather, Robert Fleming, after whom he was named. He chose to be anonymous as the sponsor of the Donald MacLeod competition and was a strong philanthropist, famously buying back the Robert Fleming & Co art collection, when the bank was sold, so that it could go on public display.

Pipe Major Iain Murdo Morrison described Mr Fleming as “a true gentleman” and recalled how his involvement with the Society came about.

He said: “I was at the Northern Meetings one year, about 2004, and was talking to Jimmy Banks, a friend of mine from the Scots Guards, and I was telling him that we were looking for sponsorship.

Jimmy knew Robin very well because he was his personal piper for any events he had. He always called Jimmy, who was working down in London at the time.

“Cutting a long story short, Jimmy says to me, ‘why don’t you write this guy?’ and gave me his number. I got in touch with Robin, explained the predicament the Society was in and he responded, saying, ‘right, we will sponsor you for five years to the tune of £5,000 a year every year’.”

P/M Morrison said: “He was a real gentleman. He was a very friendly, homely person, and an ex-officer. I remember the first time he came across here. I took him down to the house for lunch and you would honestly think that we had known him all his life. He made himself so much at home.

“He was so modest. There was no shortage of money with Robin but who would ever say that was the kind of person he was? He was so friendly. A true gentleman, in every sense of the word.”

Robin Fleming was a cousin of Ian Fleming, the James Bond author, and the family also notably owned the Black Mount Estate in Argyllshire. P/M Morrison recalled one occasion at the Donald MacLeod Competition when one of the pipers played The Duke of Roxburgh's Farewell to Blackmount Forest, a classic 2/4 March. Someone turned to Mr Fleming and asked: “Do you know that tune?” His response was: “I know it very well. I own it.”

P/M Morrison pointed out that Mr Fleming always paid his own costs for attending the competition. He added: "Without him, I don’t think we could have carried on (with the Donald MacLeod). It was a crucial time because we were asking various distilleries and organisations but the money was not available. It was just a spot of luck that Robin came on the scene. He’ll be remembered forever more, as far as I’m concerned, and he should be by the Society.”

Calum MacDonald, development manager for Point and Sandwick Trust and the former MP for the Western Isles, said: “Point and Sandwick Trust were delighted to succeed Robin Fleming in supporting the Donald MacLeod piping competition. He stepped in to help the competition at a critical time and it is clear that his contribution was not just a financial one but one based on his personal enthusiasm and deep knowledge.”