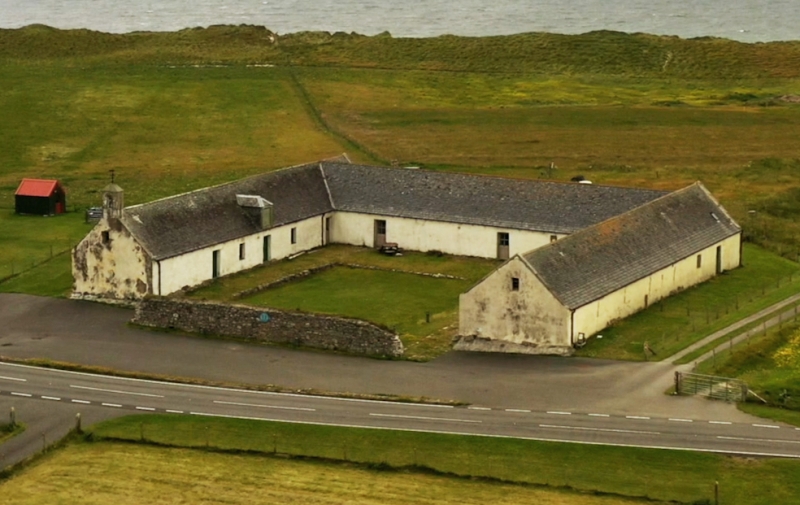 North Uist Distillery today (16th July 2020) announced the acquisition of the iconic Nunton Steadings on the Isle of Benbecula.

Nunton Steadings was the scene of several important chapters in island history and is one of the oldest surviving structures in the Western Isles.

Now the local landmark is set to be the site of another historic development, as the base for production of the first whisky to be legally distilled in the southern islands of the Outer Hebrides.

Jonny Ingledew, Master Distiller, and Kate MacDonald, Creative Director, are delighted to have completed the purchase of the steadings, which will be redeveloped as a distillery and visitor centre, and give the couple the space to distil whisky and build on the success of their popular range of premium ‘Downpour’ gins launched in 2019.

“Our main goal has always been to put the islands on the whisky map and therefore we are incredibly excited to have secured Nunton Steadings which will allow us to fulfill our whisky dream,” commented Jonny.

Kate and Jonny plan to make whisky using a grain that local crofters produce, Bere barley, which is one of the oldest cereals grown in the UK. “At one time all whisky would have been made from Bere barley but it was changed out for higher yielding barleys. Bere tastes incredible and is not mass produced, so it retains a remarkable flavor that we want to harness,” explained Jonny.

Jonny and Kate are keen to work with crofters to create a supply chain of Bere barley on the islands with the intention of one day being able to malt the barley, allowing for full grain to glass production in the new premises, Nunton Steadings.

Nunton Steadings was constructed in its current form in the early 1700s on the site of a nunnery dating back to 1300. Prince Charles Edward Stuart took shelter there while on the run in the aftermath of the Battle of Culloden in 1746.

Built on what was then a substantial farm, the structure was seized with the land when crofters raided Nunton in the aftermath of the Great War. Local crofters housed cattle and stored animal feed inside the building until it fell into disrepair and was transferred to the Uist Buildings Preservation Trust, later renamed Nunton Steading Trust, which saw the building renovated in the late 1990s. Nunton Steading Trust placed the building on the market earlier in 2020.

Kate MacDonald said: “Nunton Steadings has beautiful original features, such as the cobbled floors on the south side of the building, which will be the perfect home for our whisky casks during maturation.

“We will be providing tours which will cover the whisky and gin production process and also share the stories of this historic building and the surrounding areas.”

North Uist Distillery is now working on ambitious plans to bring Nunton Steadings back into use as a hub for the community and visitors with pop up events and a visitor centre.

Kate and Jonny are keen to give the community ownership of this venture and will be running a crowdfunder later in the year to raise money to procure whisky equipment, which has been sized to create a single cask with each production run. It is anticipated the kit will be purchased in March 2021, once finance is secured, with production commencing in 2022.

North Uist Distillery started to trade in 2019 with ‘Downpour’ dry Scottish gin, described as a strong and bold-flavoured premium gin, drenched in extra-strength botanicals, crafted to capture the spirit of life in the Hebrides. Later in 2019, North Uist Distillery launched ‘Downpour Sloe and Bramble’, which uses local heather and brambles as the main botanicals, making the product a real taste of North Uist.

Both the ‘Downpour’ gins are available to purchase from the website (www.northuistdistillery.com).

Earlier this month (July 2020) North Uist Distillery won ‘Gold’ in the Spirits Business Gin Masters 2020 for both the original ‘Downpour’ and ‘Downpour Sloe and Bramble’.