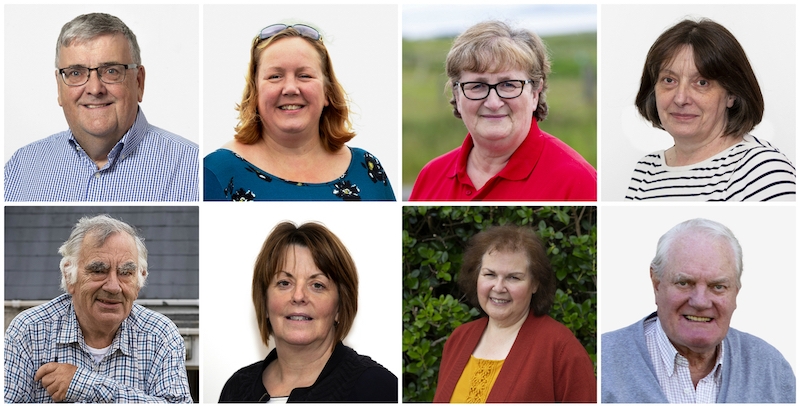 A telephone befriending project is getting underway in a bid to combat the social isolation made worse by lockdown, as part of a community wellbeing drive by Point and Sandwick Trust.

Twelve befrienders – there could be more if anyone else with the right disposition wants to get involved – are going to be getting in regular touch with people in need of a friendly chat, following the completion of training with counselling expert Hereward Proops.

Among the 12 befrienders on board so far are four directors of Point and Sandwick Trust – chair Norman Mackenzie and board members Rhoda Mackenzie, Sonja Macleod and Catherine Anne Smith – as well as a cross-section of volunteers from the community, including Nicola Whittington, Donnie Taylor, Dene Campbell and Christine Macleod.

Christine Macleod, living in Lower Bayble, said she became involved as a telephone befriender because the issue of community wellbeing was “close to my heart”.

Christine said: “Point and Sandwick Trust are doing amazing work within the community. I was asked by Donald John MacSween if I would like to be involved and my reply was a definite ‘yes’.

“I believe this will be an excellent service providing a listening ear to those who are most vulnerable in our community, ranging from the young to the older generation.

“There is now a team of people involved in this project and we all bring our different skills to provide a confidential telephone befriending service covering from Sandwick to Portnaguran.”

The befriending project is part of Point and Sandwick Trust’s package of community support during the coronavirus crisis. It is being managed jointly with the Point and Sandwick Community Councils and follows the establishment of a grocery delivery service and a freshly cooked meals delivery service, with meals prepared by Chief Cook Donald Smith.

Alasdair Nicholson, Point and Sandwick Trust’s community development consultant, who applied for the funding, is pleased to see the grants being put to such good use.

He said: “The important thing is that people are given the type of assistance that they require.”

With safety and best practice in mind, Point and Sandwick Trust secured the services of Hereward Proops to train the befriending volunteers, as well as those working on the delivery service, on how to be good, supportive listeners.

The volunteers took part in training sessions over Zoom, in which Hereward shared key principles such as active listening and open questioning and stressed the importance of communication skills in helping tackle social isolation.

Hereward said: “I think the befriending scheme is such a good thing in this community.”

He added: “I have huge concerns about social isolation on the island. I think it’s a big problem and I hope the befriending scheme runs on after locked is lifted so that people can have more face to face interaction because there are a lot of benefits from that. Zoom is useful, Skype is useful, but it shouldn’t be seen as a replacement for meaningful face to face contact.”

Donald John MacSween, general manager of Point and Sandwick Trust, said: “I am really pleased by the number of people who have volunteered to become befrienders in the Point and Sandwick area. The project has attracted a diverse range of people in our community who are willing to undertake training and be supported in their role as befrienders.

“Although we live in a close-knit community we are aware that some people are very lonely and isolated, not just during the current pandemic, but also throughout the rest of the year because of poor health, age, social circumstances, lack of transport, family on the mainland and a host of other reasons. The aim of the project is to develop a light-touch befriending service to try to alleviate those issues of isolation and loneliness."