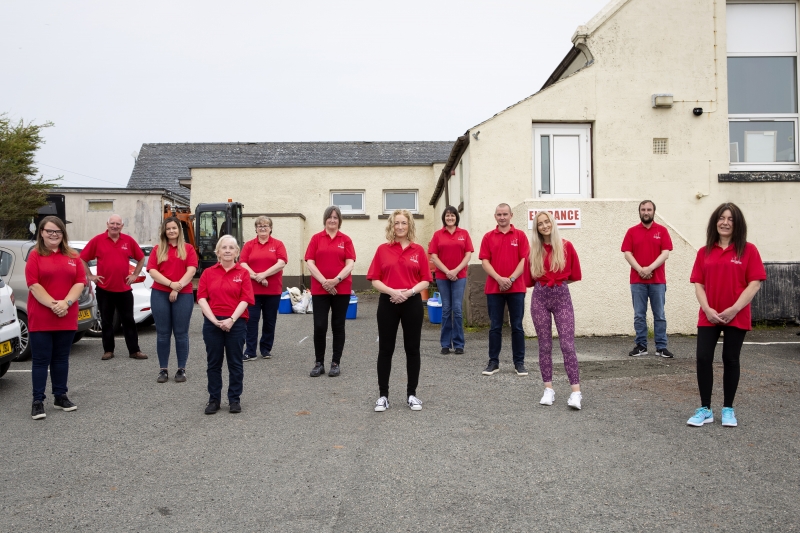 Cooking up some local wellbeing

Eleven volunteers are giving of their time, many of them daily, to pick up freshly cooked meals from 'The Chief Cook' Donald Smith, who has temporarily relocated his kitchen to the Old School in Knock, and deliver them to recipients throughout Point and Sandwick.

The meals service is part of a Community Wellbeing project along with a befriending service for vulnerable people.

The project was launched by community wind farm organisation Point and Sandwick Trust as part of its efforts to combat the impacts of the Covid-19 crisis and made possible by funding from the Scottish Government Wellbeing Fund.

As of the end of June, there were 65 people receiving meals through the project.  Wellbeing project co-ordinator Sandra Macleod said: “I’m absolutely delighted to have volunteers. The whole project wouldn’t be happening without them.”

As they lined up for their group photo, in their Point and Sandwick Trust polo shirts by the Hebridean Design Company, Sandra said: “This is the first time I’ve seen them all. It’s amazing.”

Maggie Mackenzie from Parkend delivers to North Street, East Street and Plasterfield. She said: “People say it’s something to look forward to and nice to see a smiley face. They all say the food is beautiful and everybody that I’ve delivered to is just so thankful.

“I’m on furlough just now. I’m not working and just wanted to do something, if I could help out in any way. It’s great being able to. It makes you feel good that you’re doing something nice for people. It’s a wonderful thing.”

North Street resident Janette Ramsay is also delivering to North Street and East Street, as well as Lower Sandwick. She became involved after a chance meeting with Sandra, who was delivering a meal early on to Janette’s 90-year-old mother. “I asked her if she had volunteers and I said I could do Sandwick and Parkend, no problem. It’s absolutely fantastic because I come from Sandwick and I know most of the people. I can do it and I’m happy to do it. I work it out with my work.”

Peigi MacSween from Lower Bayble is delivering to Knock, Upper Bayble and her own village. She said: “It’s good. It was a wee bit nervy at first because of Covid but it’s a lot easier when you get used to it and everybody is really positive about the service.

“It feels good because you’re helping people who couldn’t get out and are isolating. Sometimes you are the only person that they see all day.”

Tom Joyce, from Garrabost, is delivering to Aird and Portvoller. He had registered as a volunteer on the Comhairle nan Eilean Siar and Scottish Government websites early on in the crisis. “Then I got a call from Sandra, saying there was a vacancy here, if I was interested. I joined because I believe in the project. I had been working in the food bank, so I knew there was a need. The project in general is excellent and well done to Point and Sandwick Trust for financing it.”

Chief Cook Donald Smith said. “My sense of satisfaction for providing meals for the elderly and the vulnerable in Point and Sandwick is incredible. It’s good to be doing work that benefits the community and I’m delighted that they asked me to do it.”

A choice is provided every day and each meal is two courses. Meals are provided seven days a week, with all the weekend meals being delivered together on Friday.

Point and Sandwick Trust general manager Donald John MacSween said more than 30 people had volunteered to help Point and Sandwick’s pandemic response, in one way or another – a number he described as “remarkable”.

“We are fortunate to live in a community that has willingly risen to the challenge of the times in such a positive way, and very fortunate to have great support from the Community Councils in Point and Sandwick, our project partners.”

Point and Sandwick Trust initiated its responce to Covid-19 in March, with the creation of its Pandemic Community Fund and its pledge to commit every spare penny generated by the wind farm this year to fighting the crisis. Since then, it has made significant donations to NHS Western Isles and the Point, Sandwick and Stornoway Community Councils.