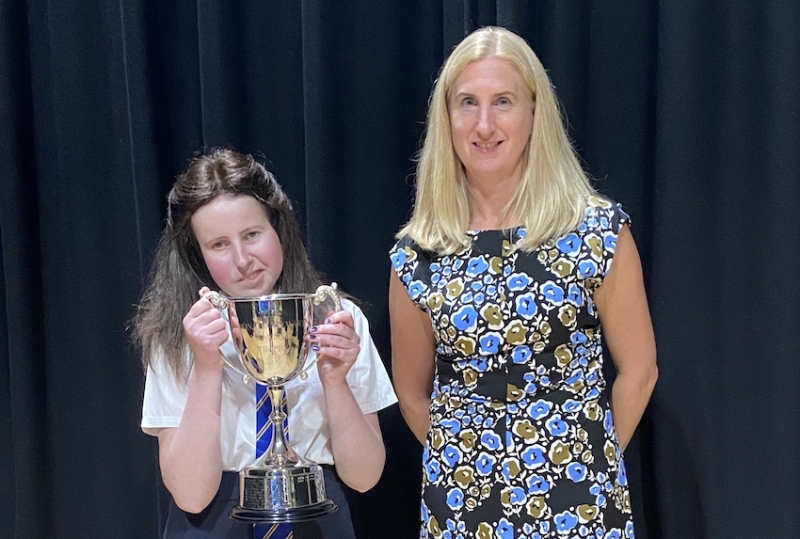 After considering nominations received for this year’s Award for Outstanding Achievement, Trustees were unanimous that the Award be made to Kirsty MacInnes.

Trustees were highly impressed with Kirsty’s commitment to her studies, her outstanding achievements at local Mods over many years, and in particular, her voluntary work in the community.

The Trustees were thrilled to learn of Kirsty’s participation in local Mods and family ceilidhs over many years.  They stressed that Mods and family ceilidhs were a huge part of community life and stressed the importance of young people participating or that these events just would not take place.  The Trustees also expressed their congratulations to Kirsty on her track record at local Mods, where she has been successful in a number of competitions year on year.

But, above all else, what really impressed the Trustees was her voluntary work in the wider community.  Kirsty has been working at Cobhair Bharraigh, a local day centre for the elderly, and in the community shop, Buth Bharraigh and has also been involved in many other volunteering and fund-raising activities both within the school and in the wider community over the years.  Fantastic achievement.

The Trustees are aware, and all the more impressed, that all of Kirsty’s achievements have been attained against a backdrop of personal health challenges.

Trustees were unanimous that, with her drive, commitment, motivation, inspiration and selflessness Kirsty has been a wonderful example to her peers and younger students, and that the effect on them  cannot be overstated. The Trustees were unanimous in their decision to award the Donald Stewart Memorial Trust Award for Outstanding Achievement to Kirsty.

Suzanne Forman, Headteacher at Castlebay Community School said, “We were delighted to receive the news that Kirsty had won the Donald Stewart Memorial Trust Award for ‘outstanding achievement’. Having known Kirsty from her Primary school days in Eoligarry School, I have been astounded by her determination over the years to succeed. She has overcome many difficulties to become the lovely young lady that she is, achieving a wide range of qualifications on that journey.

"Kirsty is a credit to her family, both Castlebay and Eoligarry Schools, and to our wider island community. Well done Kirsty!”

Because of the restrictions currently in place, the presentations of the two awards were made in separate “Virtual Presentations” by Bernard Chisholm, Director of Education and Children’s Services at Comhairle nan Eilean Siar.

The Donald Stewart Memorial Trust was established many years ago, in memory of the former, much loved and much respected Member of Parliament for the Western Isles, for the encouragement of education in the Western Isles.  Since the formation of the Trust in the ‘90s, it has been making annual awards, for “Outstanding Achievement” to pupils in the 5th/6th year classes from across the four 6-year secondary schools in the Western Isles.

Both awards are open to pupils in the 5th/6th year classes from across the four 6-year secondary schools in the Western Isles, i.e. The Nicolson Institute, Sir E Scott School, Sgoil Lionacleit and Sgoil Bhàgh a’ Chaisteil with pupils being nominated by the schools.

Margaret Martin, Chair of the Donald Memorial Trust said, “We were highly impressed with the overall quality of this year’s submissions in the two competitions.  On behalf of the Trust I congratulate Hamish and Kirsty on winning their respective awards and wish them both well in all they do in the future.  It is evident that we have a wealth of talented young people in the Western Isles.  I wish to thank the schools for their continuing support for the Donald Stewart Memorial competition, without whom, the competition would not exist.”