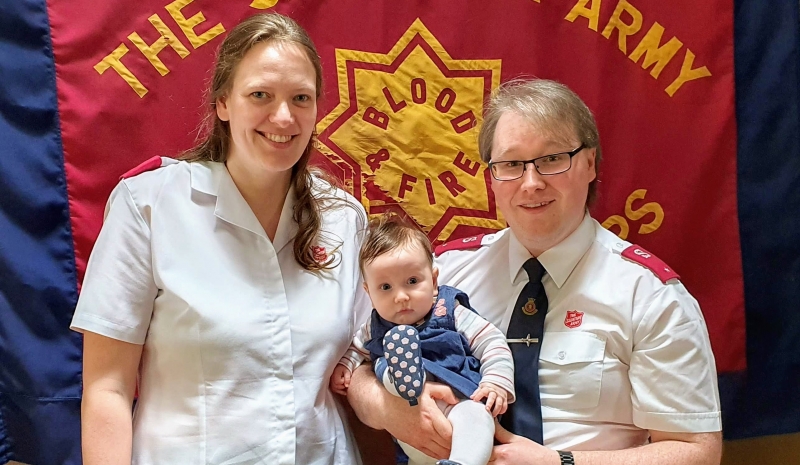 Change of guard at Salvation Army

Stornoway’s Salvation Army corps is about to see a changing of the guard, as Lieutenants Callum and Emma Newton take their leave after five years.

Callum and Emma will this week (Friday 26 June) be promoted to Captain ahead of their move to serve as the new officers at Aberdeen Citadel corps, one of the oldest corps in Scotland, established 140 years ago.

They’ll be finishing their official time in Stornoway on 9 July and leaving on 14 July, with just those few days to pack up their belongings. Callum told corps members in a recent newsletter: “We could be leaving Stornoway in a bit of an odd way and we will be arriving in Aberdeen in similar unusual circumstances. There will be no farewell and no welcome meeting.”

Stornoway’s new officers, Lieutenants Christopher and Faith Thompson, are to be commissioned on 11 July at the first-ever live-streamed virtual commissioning ceremony for the Salvation Army.

They’ve been at William Booth training college in London for the past two years and are originally from Chester-le-Street in north-east England. They’re due to start work in Stornoway in the last week of July.

Captain Callum and Captain Emma have had an eventful five years in the Stornoway corps and will carry with them a lifelong link to Stornoway, as their daughter Isla was born here just four months ago.

Callum said: “We have had the busiest time ever over the past few months and, although it’s a sad time for many people, it’s good to know we’re doing the right thing at the right time with our food and other support at Stornoway golf club.

“It is the hallmark of the Salvation Army, doing what is most needed and we are seeing numbers rise all the time. On Wednesday (24 June) we had 82 people through the door to collect food support, the highest number we have ever had. I am pleased that we can help, but it’s also very sad.”

The Newtons’ service to Stornoway has been marked in other ways, such as with the setting up of a baby bank of clothes, toys and essential toiletries for newborns and young children.

New to the island during their tenure is the Salvation Army emergency response vehicle, which was commissioned after learning lessons from the Transocean Winner incident.

Callum said: “We were up there serving hot food and drinks to emergency workers and salvage crews, but we had to beg and borrow the equipment to do it. After two years campaigning we got a custom-made vehicle which has everything we need for such events and it has already been used several times at incidents such as missing person searches.

“It is designed specifically for island needs, with features like a 4X4 chassis so that it can cope on rough roads like peat tracks. It has two urns, a gas griddle and everything needed for catering, together with a generator and power sockets that include USB charging points, since our emergency services are so dependent on mobile communications.”

Callum and Emma’s time in Stornoway has seen innovations like this, but also the quiet daily work of the Salvation Army supporting those who need food, shelter and companionship for whatever reason.

The Salvation Army’s vital work will continue during the handover period, with volunteers running the twice-weekly service at the golf club and helping the new officers to settle in.

Callum said: “We have had a really good five years. It’s a beautiful place and we knew when we came here that it would be for a limited time, so we have done our best to make the most of it.”

Callum and Emma are pictured with baby Isla just before their promotion to captains on Friday.