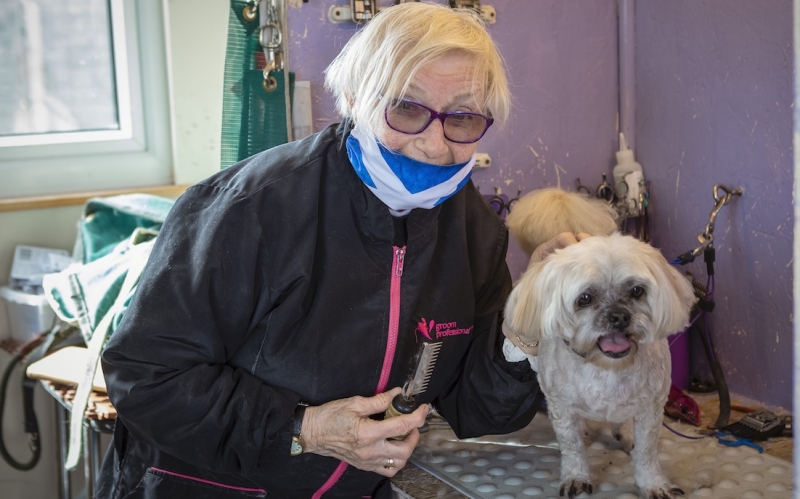 A Point woman has hailed Stornoway fire crew as heroes, after they rushed to her rescue in an emergency last week.

Mary Golish of Sheshader didn’t know where to turn when she went to her home-based dog grooming business last Wednesday (17 June), only to find it under inches of water.

Mary said: “I had looked out of my window the night before and seen the yard was like a swimming pool, but both then and in the morning I just thought it must have been raining really hard.

“Then I went to open up my groom room ready for my first customer and water just came rushing out. The whole place was flooded.”

Mary’s two-room grooming parlour was awash because of a burst pipe under the floor. Furniture in the waiting room was saturated and the room was unusable.

“I couldn’t think who to ask. I tried ringing plumbers but no-one was answering. I rang the council to get advice on who could help me and their phone wasn’t answered. In desperation I rang the police and they advised me to ask for the fire service, so I called them.”

It wasn’t long before a fire engine and a crew of eight from Scottish Fire and Rescue Service in Stornoway, carrying a water pump, were with her. Mary said: “I don’t know how they managed to get that massive vehicle into my driveway, because it’s a really tight turn, but they did. They were so helpful, so courteous and reassuring.”

Mary’s neighbour, Iain ‘Shocan’ Stewart, had spotted her in distress and waded in to find and turn off the stop-cock. The fire crew then sloshed and swept the water out of both rooms and returned her to a normal state – even if there had already been plenty of water damage.

“Luckily my electric sockets are high up the wall, and the floor is tile, so that reduced some of the damage. It’s just the furniture really. My neighbour came in the next day and found the burst pipe under the cupboards, and he had it all fixed within the day.

“I’m really so grateful both to Shocan and to the fire crew. They were so kind, I really can’t thank them enough – one of the firemen even talked to my insurance company for me. It has reassured me that if I ever need anything in a crisis, I know they’ll be there.”