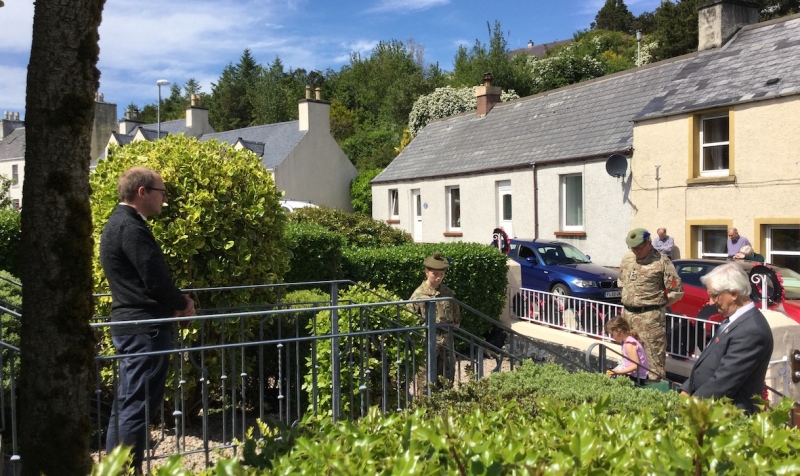 A small, socially distanced crowd gathered by the war memorial in Tarbert this afternoon at 2pm as the Heroes of St Valéry were remembered today (Friday 12 June) on the 80th anniversary of the ‘other’ Dunkirk, at which the forgotten army of the 51st Division, including the Seaforth Highlanders, made their stand.

St Valéry was a sacrificial rearguard action defending the retreating British forces as they escaped mainland Europe from the beaches of Dunkirk.

Pipers in Stornoway and at Kinloch were among those who joined an international tribute, with pipers in 16 countries playing the tune Heroes of St Valéry.

The tune was written by Pipe Major Donald Maclean of Balantrushal in Lewis, himself one of the 10,000 members of the 51st battalion captured at St Valéry. They were subsequently marched through Belgium and Holland to East Prussia (now part of Poland) where those who survived the march were kept as prisoners-of-war.

And at Tarbert War Memorial the Lord Lieutenant of the Western Isles, Donald Martin, paid his own tribute to soldiers including his uncle, Private Donald Martin, after whom he was named. Pte Martin was killed in action at Abbéville on 4 June 1940 and is pictured below. 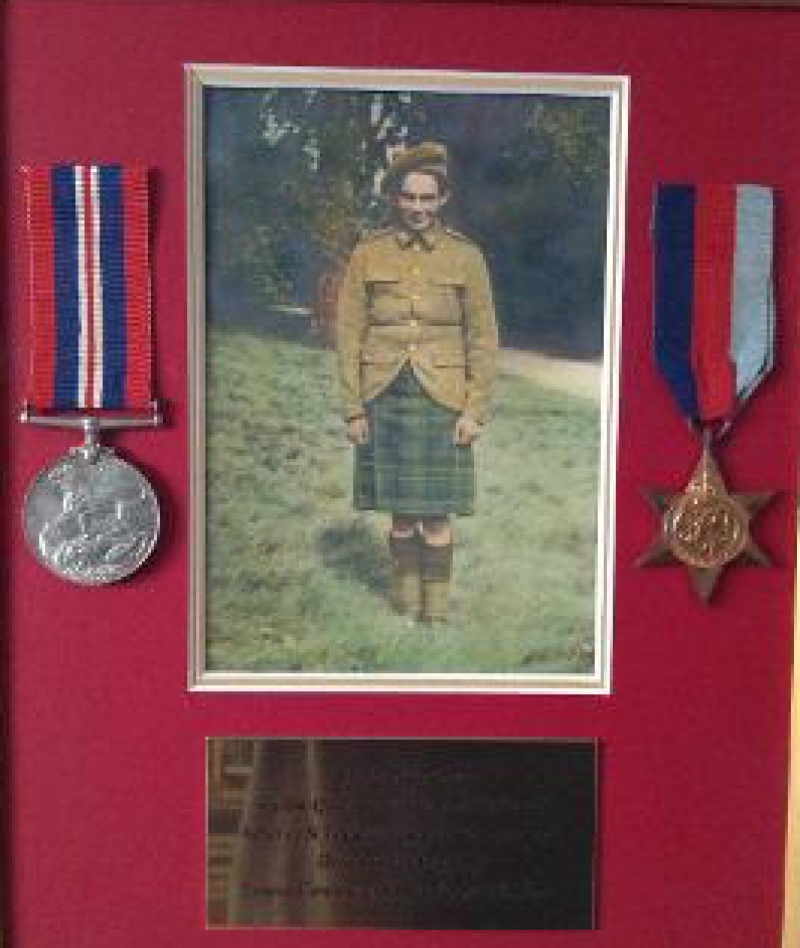 The event was co-ordinated by John Murdo Morrison and included prayers, and a playing of the Last Post by Karen Logue, as well as piping by Hamish Scott.

Donald Martin said: "Today’s low-key event, commemorating the 80th anniversary of the surrender of the 51st Highland Division at St Valery, is a poignant and personal occasion for me.

"My uncle, Pte Donald Martin after whom I am named, was killed in action on 4 June 1940 during the 4th Battalion attack on the Abbéville bridgehead at Huchennville. He served in B Coy of the Queen’s Own Cameron Highlanders, whose commanding officer Captain Fincastle of Borve Lodge, Harris was also killed in the onslaught. Several other Harris men were killed or severely wounded.

"My grandparents, Duncan and Mary Martin of Bunavoneadar – Donald’s parents - were not informed of his death until April 1941, some ten months after he was killed.  They received a letter from Lt William R Robertson of Tarbert writing from a POW camp in Germany.

"Lt Robertson was the only surviving officer of B Coy and was taken to a Prisoner of War camp in Germany following the 51st Highland Division’s surrender on 12 June.  In his letter he explained that my uncle was severely wounded on the morning of 4 June 1940 and died in a Field Dressing Station as a result of his wounds.  He is buried in the London Cemetery Extension, Longueval, Somme, France and in September 2013, my wife Sandra and I paid a very emotional visit to his grave – the first time any member of the family had the opportunity of visiting his grave. His headstone has the following inscription from the Book of Proverbs – Chap 4 v 3

“For I was my father’s son, tender and only beloved in the sight of my mother”

The following memorial was inserted in the Stornoway Gazette in June 1942, in memory of Donald who gave his life for King and Country at the age of 20 years on 4 June 1940.

He sleeps not in his native land

But ‘neath some foreign sky;

So far from those who loved him best

In a hero’s grave he lies.

Sleep on darling Donald, in your far-off grave

But as long as life and memories last

We will remember thee.

Sadly, very few of the veterans of St Valery are still alive to mark this 80th anniversary, which makes it all the more important that we and the generations that follow us never forget the sacrifice they made.  We owe it to them that they will never become the forgotten Heroes of St Valery."

Speaking ahead of the commemorations, Gordon Michie of Poppy Scotland, said: “St Valéry represents a hugely significant moment in our nation’s history, and it is vitally important that the bravery and sacrifice of the ‘Forgotten 51st’ is forgotten no more.”