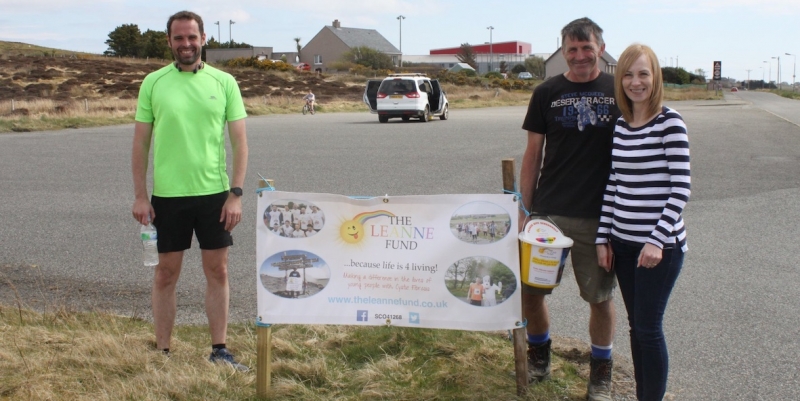 The London Marathon didn't happen when planned this year but that didn’t stop island resident Chris Whittington completing his own Marathon in a Church car park near his home on the Isle of Lewis.

Regular runner Chris Whittington had set himself the challenge of running the London Marathon but due to the current Coronovirus pandemic, his plan was on hold until he came up with an alternative.

He took on Marathon Lunainn on Saturday (April 25), running 26.2 miles / 218 laps of the car park in Point in just over 3 hours 47 minutes, breaking his personal best and raising more than £1800 for The Leanne Fund.

Chris provided live video updates on his Facebook page while running and got many cheers and even some musical performances from the community making it an extra special event.

Chris said: “It was nice to be doing something worthwhile on a weekend when I would have been disappointed about not running London, and The Leanne Fund is such a worthwhile cause, and one that is clearly of great importance locally.

“I’m overwhelmed by everyone’s generosity, I couldn’t have anticipated it would raise the amount that it has - I think it’s pretty much at what the Point 5/10K raises last year which is fantastic.

“I decided to fundraise for the Leanne Fund because it is a local charity that does great work and directly supports so many people within our close-knit community - particularly during the pandemic. The London Marathon have been advertising the 'two point six challenge', in an effort to get individuals to support the UK's charities at a time when large sums of money would normally be raised by various running events.”

Chris admits Marathon Lunainn was a challenge even though he has taken on marathons before, the first while on deployment in Afghanistan and Marathon Hebrides in Harris last year.

He powered on with many distant cheers from local families which kept him going to the end.

He said: “On the day, Marathon Lunnainn was pretty hard work. It was hard on parts of the body I wasn't expecting due to the number of turns and was quite mentally tough. What got me through was the fantastic support of a few socially distanced families that came down to cheer me on and got me to a marathon PB of 3 hours 47 minutes and 32 seconds.”

“I have run two marathon distances prior to this. My first marathon was on deployment in Afghanistan six years ago with a friend - very flat but very hot! My second (and only 'official') marathon was the Marathon Hebrides in Harris last year. I still hope to run London on the rescheduled date on October 4th as I've been trying for 11 years to get it!”

Chrisetta Mitchell, Leanne Fund said: “We are so grateful to Chris for completing this amazing challenge and raising vital funds for The Leanne Fund.

The Leanne Fund is continuing to provide vital support to those affected by Cystic Fibrosis and their families across the Highlands and Islands, Grampian and Tayside regions during the COVID-19 pandemic.

The charity, which relies heavily on fundraising and donations, is currently working extremely hard to continue assisting those with Cystic Fibrosis who are classed as extremely vulnerable to severe illness from infection with COVID-19.

If you would like to contribute to Chris’ fundraising, you can donate here: https://uk.virginmoneygiving.com/Chris.Whittington