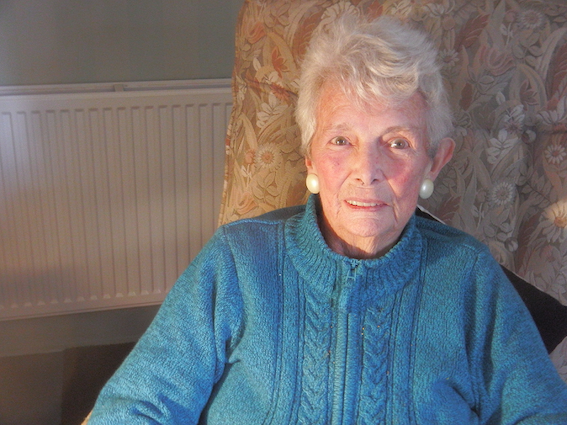 Deirdre Macdonald, formerly of Lewis Street, Stornoway, has died at the age of 92.

Her father, Thomas Babington Macaulay (1896-1984) was the son of Donald Macaulay, draper, of 28 North Beach Street and his wife Christine (née Maclean). Donald was born in Uig.  Her father’s name echoes that of the noted early 19th Century British historian whose father’s ancestors also came from Uig.  Her mother was Anne, daughter of Mr and Mrs K.D. Henderson.

Deirdre married Alasdair Macdonald from Newton. He was better known as “Alasdair a' Ghaoil”. Alasdair was the headmaster in Aird School on Point for many years until he retired in 1982. They had four children, Tom Macdonald, Sandy Macdonald, the late Timothy Macdonald and Alison Morag Smith.

Deirdre’s parents also had a wool shop around the corner on Bank Street where a takeaway pizza outlet is nowadays.  With the Macaulay family shop situated on North Beach, and her other grandparents, Mr and Mrs K.D. Henderson running Henderson’s shop on Bayhead, Stornoway town centre was a playground for young Deirdre.  “With grandparents living at either end, I was quite familiar with both ends of the town,” Deirdre told EVENTS newspaper during an interview in 2017.  “I remember spending a lot of time at the playpark on Bayhead, and there were so many kids around that end, hundreds of folk used to live on Stag Road so it was always a busy place to be.”

Educated at The Nicolson Institute’s primary and secondary departments, before later securing a Honours Degree in Literature from the Open University, Deirdre worked for a number of years in various roles at Lews Castle College, a time she recalled with ‘a great deal of affection.

Having witnessed changes to Stornoway during her lifetime, it was the tragedies of World War II that left the greatest impact on island life.

“The war changed everybody and everything,” Deirdre said. “Before the war was one thing, after it was totally different; but that was the same all over the country really.  The men went away to war and they came back completely different people. The experiences they had altered their lives forever, they were changed by it and I think it took a while for those of us at home to realise the changes, and then to adapt to them.”

Her father was awarded the Distinguished Conduct Medal (DCM) for conspicuous gallantry in action while serving with the Royal Naval Division in France in WW1. Her husband was severely wounded in the stomach when evacuating a blazing Sherman tank in 1944.  Her childhood friend John McGuckin who lived at Perceval Square was lost as an 18-year-old cadet when SS Nailsea Court was sunk in 1943. Deirdre recalled playing many games in Perceval Square with John and his sister Margaret, including games of cricket.

“Once it started people joined and remembered then not only their own memories, but the stories that their mothers, father, and grandparents had told them,” she recalled.  Deirdre was a founder with Sandy Matheson, Murdoch Macleod, Frank Thompson, Colin Maciver, DL Smith and others.  “Everybody was anxious not to lose their history, their childhood stories. So many stories were brought in and therefore not lost; the oral stories were now recorded.

“It was something that was so necessary to have, and it has preserved the history in a way that’s very accessible to people still today. Before then the stories were known, but they weren’t accessible. Now if someone has a question about Stornoway from the past, they can turn to the Historical Society to get the answer easily.

“The Historical Society is preserving history, remembering things that without it wouldn’t be remembered. It preserves the history of the town, that’s exactly what it does. Before we started, nothing did that,” Deirdre added.

Deirdre also helped develop the town's cultural outlook with local drama group Stornoway Thespians. Deirdre is remembered by many budding island actors through her long involvement with the Thespians, who have entertained island audiences with plays, performances and pantomimes over decades.

Deirdre said: “Drama was always my main interest and the Thespians started off as just a fun experience, but when it ended up a very large part of my life really, I was glad.”  Starting off, the Stornoway ‘am-drams’ presented two plays a year – a one-act play early on in the year as part of a national competition, followed by a three-act play later in the year.  And many of the plays and dramatic works performed over the years by Stornoway Thespians were both written and produced by Deirdre.  “We had a lot of good actors, but not so many producers and it was a role I was happy in. The group gave a lot of people an experience they wouldn’t normally have got, the chance to perform, and it was a great thing to be involved in.”

The Thespian’s repertoire expanded when Donnie Maclean, from Back, introduced the idea of performing a pantomime.  “We’d just never really thought it a pantomime before, but when Donnie suggested it, we couldn’t think why we hadn’t!” said Deirdre.  “It widened the scope of the Thespians and that was necessary at the time, I think,” she continued. “The first one was put together by Donnie on his own and it was a success, but we learnt that it was too much for one person to run.

“The next year we put a team together of half a dozen with people in charge of the acting, the production, costumes, set design and so on, and from then on the pantomimes really took off,” she recalled.

Deirdre was also hugely involved at the outset of An Lanntair arts centre. She was on the founding board of directors and went on to become one of the early chairs of the board.  She had great creative energy and was very supportive of other initiatives in other art forms. One project with which she became particularly involved was the inter-island arts association, Ealan nan Eilean, that Pròiseact nan Ealan set up around 1990 to link island arts organisations from An Lanntair in Stornoway to Fèis Bharraigh on the Isle of Barra.  Fèis Eilean an Fraoich on Lewis was inspired by that contact with Fèis Bharraigh and is Ealan nan Eilean's lasting legacy.

Malcolm Maclean, the long-time head of PnE said: “Deirdre played a hugely important role in the arts in the islands at a time when, as the great Flann O Brien said, ‘it was neither profitable nor fashionable’. She was a lovely lady, a bright and talented woman and a great friend and ally. She deserves to be remembered.”

Deirdre’s sister Kirsty, who lives on Church Street, Stornoway, was married to the late Malcolm Maciver (Skate), a banker with the Bank of Scotland. They have a son Finlay who is married to Lynne Maciver, the Iolaire Centre Project Manager and a daughter Amanda Jane who is a business consultant.  Another daughter died a few years ago.  Lynne Maciver now has her offices above the family’s former North Beach shop with an entrance from Bank Street.

The interment of the late Deirdre Macdonald took place in Ardroil Cemetery on Tuesday April 14th 2020, under the extreme restrictions of the coronavirus pandemic with only immediate family present.

(A number of incorrect details about Deirdre Macdonald's immediate family have been corrected since this was first published.  We apologise for these errors.)