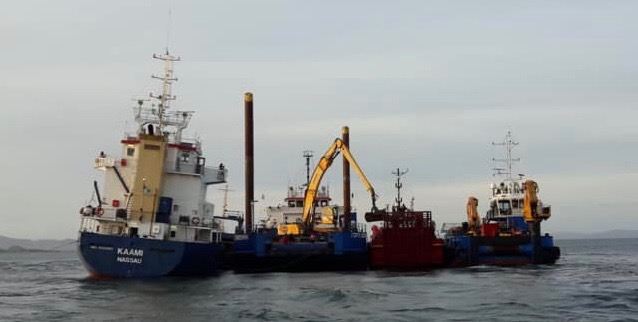 The stranded cargo ship which remains rock-bound in the middle of the Minch is being steadily emptied of cargo, with plans advancing for lifting and towing her when possible.

Salvors today (Monday 20 April) reached the half-way point in removing MV Kaami’s 1,927 metric tonnes of cargo, using a waterborne chain of smaller vessels to shuttle between the ship and Kishorn, where the salvaged cargo is being landed.

Salvors have positioned the Forth Guardsman, with a long-reach crane, alongside the Kaami in her position on rocks known as the Eugenie Rocks, south-east of Lewis.

A fleet of small cargo vessels and landing craft including C Odyssey, Jenna, Carly and Leslie Anne are being filled with large skip-loads of the pelletised wood and paper which forms the cargo and rotating between the Kaami and the landing point at Kishorn.

The Dutch vessel Multratug 3 has been maintaining guard over the wreck throughout the operation, ensuring that the 500 metre exclusion zone around the ship remains intact.

Also operating around the ship today are Lewis and Harris-based dive support vessels the Venturer and Hirta. Divers are continuing to survey the vessel and surrounding area.

A statement this morning from the Maritime and Coastguard Agency (MCA) said: “Good weather has made it possible for the salvors to remove 44 skips worth of cargo from the MV Kaami over the weekend.

“The ship remains aground in the Minch between Skye and Lewis. So far 138 skips worth of cargo have been taken ashore and cargo offloading will continue on Monday and Tuesday.”

Stephan Hennig, the Secretary of State’s Representative Maritime Salvage and Intervention (SoSRep), said: “Greatly improved weather and sea conditions have made all the difference in this operation as we had hoped they would.

“The removal of so much cargo now means we’re getting closer to the next phase of the salvage, which will focus on assessing the internal damage and attempting to temporarily repair damaged sections of the ship.”

One option for moving the ship would be to pump compressed air into the empty cargo holds, allowing the vessel to regain buoyancy and be refloated off the rocks. She could then be towed to a safe haven for repairs.

A similar process was used to move the Transocean Winner drilling rig when she grounded at Dalmore in Lewis, in 2016.