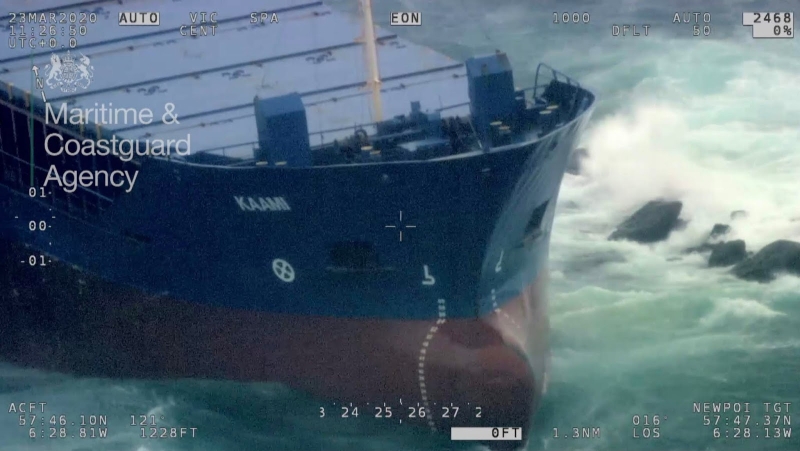 A cargo vessel which grounded on rocks, mid-Minch between Lewis and Skye, has brought unexpected business benefits to Lewis and Harris, but it also poses a threat of potential pollution.

The Norwegian-owned general cargo vessel MV Kaami ran aground on rocks known locally as Sgeir Graidach or Eugenie Rocks, in storm winds and high seas in the early hours of last Monday 23 March.

Eight Russian crew members were winched to safety from the pitching deck of the vessel by Stornoway’s Coastguard helicopter, R948, immediately after the initial impact. They were returned to Stornoway, where they were kept in isolation at a town hotel before seven of them returned to Kaliningrad on Friday (27 March).

Although the ship is expected to remain in position for some considerable time, local resources are being called into play to complete survey work and plan cargo salvage ahead of any future retrieval of the vessel herself.

The ship’s chief engineer has remained in Stornoway, from where he is helping a specialist team of salvors from salvage company Resolve Marine Group. A series of air and sea-level surveys have been carried out by the Maritime and Coastguard Authority (MCA) to assess the condition of the vessel and to help put together a salvage plan.

Resolve’s team of seven specialist salvors and other support staff have based their operation in Uig, Skye, but the resources to support the operation are not readily available there.

And the operation has been made more challenging because of movement and proximity restrictions in force during the Coronavirus epidemic. 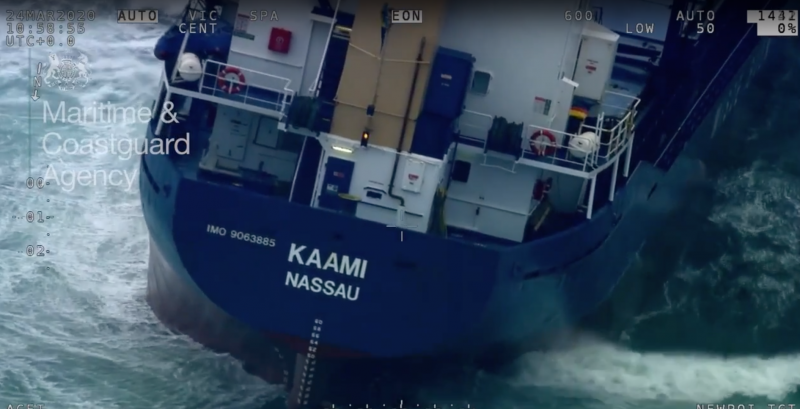 As a result, businesses in Lewis and Harris, with experience based on the 2016 salvage operation for the grounded drilling platform Transocean Winner, are helping to locate the materials and resources needed and to transport them to the site.

Among those helping out with the operation are Stornoway Shipping Services, Tarbert-based Kilda Cruises and Seatrek of Miavaig, who have provided the dive vessel enabling inspection of the damage to the grounded ship.

The MCA today (Monday 30 March) released an updated bulletin on the progress of the operation.

It said: “A specialist salvage team, supported by the Maritime and Coastguard Agency, began removal of fuel and contaminated seawater from the tank on Friday (March 27). The removed fuel and oily waste is to be taken to Uig in Skye for onward disposal.

“It is believed that around 28 cubic metres of diesel has escaped from the ship. The Scottish Environment Group is aware and has assessed the impact of the pollution as low and nonpersistent.

“Plans are being developed for the safe removal of the vessel’s cargo, including the hire of suitable barges.

“A seabed topography survey was completed at the weekend. The survey results will be used to accurately assess the grounding conditions of MV Kaami and to develop plans for removing the ship from the rocks once the cargo has been discharged.

“A temporary exclusion zone of 500 metres remains in place around MV Kaami to all but those vessels directly involved in supporting the response. The Maritime Accident Investigation Branch is carrying out an investigation remotely with assistance from the salvors. A fixed wing aircraft, provided by the MCA, continues to provide pollution surveillance patrols.”

The 90-metre general cargo vessel has reportedly been damaged in several places, not only by the initial impact onto the rocks, but by additional movement over two days of stormy seas immediately after the incident. An exclusion zone of 500 metres is being patrolled around the ship.

It’s expected to be some weeks before the operation to repair, refloat and tow the ship away can be successfully completed under the supervision of maritime authorities including the UK’s chief authority on salvage and wreck, the Secretary of State's Representative for Maritime Intervention and Salvage (SOSRep) Stephan Hennig.

Pictures show the MV Kaami aground on the rocks (MCA) and the Seatrek dive boat Venturer, which has been operating around the casualty vessel