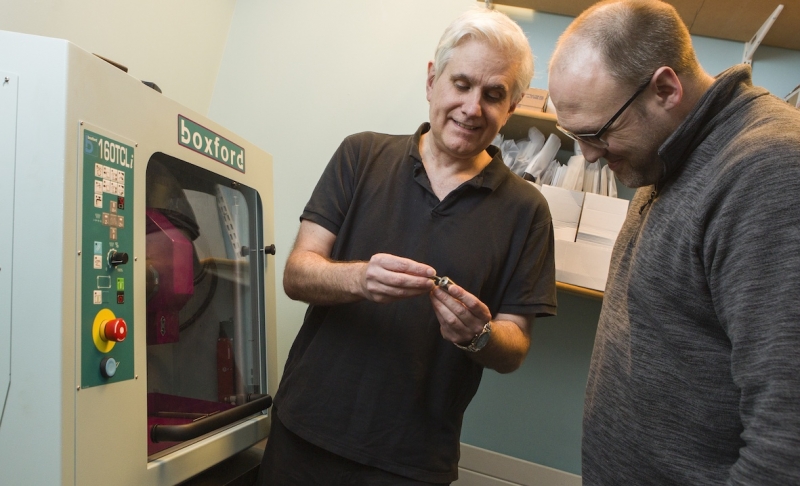 Everything the Innovation Centre at Lews Castle College UHI was set up to achieve – helping would-be inventors and entrepreneurs turn their good ideas into marketable products – can be seen in the students who are using its facilities to make their mark on the world.

None more so than Lewis man Alick Maclean – a 40-year-old engineering student from Ranish, Lochs, who won two awards at the University of the Highlands and Islands Business Competition earlier this month (February) in Inverness.

Alick, who is in the final year of his BEng (Hons) Mechanical Engineering degree, won the Best Engineer Award and Best Design Award for a new design concept of boat trailer. His trailer uses components thought to have never been used before in trailers, to make it much easier to load and unload boats from the trailers without the need for so much manpower.

He had designed the trailer for his third year project and made a model of it using the 3D printer at the Innovation Centre – a machine funded by the centre’s £20,000 expansion grant from community wind farm charity Point and Sandwick Trust, which levered in further investment from LEADER.

Congratulating Alick on his double win, Point and Sandwick Trust said they were delighted to have been able to support islanders in making the most of their good ideas.  Andrew Mackenzie, a Point and Sandwick Trust board member and also Alick’s lecturer in renewable engineering at Lews Castle College, said: “Alick showed that with a great original idea, support from Lews Castle College staff, hard work and access to the Innovation Centre, award-winning performance can be achieved.

“All this was only possible with help from Point and Sandwick Trust who invested a significant amount in the Innovation Centre and saw the potential for young people to follow their dreams and achieve real results that are of such quality that they win awards. This means that ‘innovation’ is not the preserve of young people on the mainland. With PST’s belief and new technologies, local young people are being enabled to achieve excellence.”

Dr Chris Macleod, founder of the Innovation Centre, added: “Alick is an excellent student and has won several prizes for this idea while he has been at college. He is a good example of how anyone, regardless of age, can retrain for an exciting new career in engineering and technology.”

Alick is one of around 30 current users of the Innovation Centre’s facilities. The centre, which was significantly expanded in 2018 thanks to Point and Sandwick Trust’s investment, acts as a hub for high technology development, advice, expertise and training for college students, businesses, charities, schools, local people and entrepreneurs.

In addition to the large-scale plastic 3D printer which Alick used for creating the model of his trailer concept, the Innovation Centre recently purchased two large metal printers as a result of the investment from Point and Sandwick Trust and LEADER.

These machines can create movable metal components and could be used to make a whole range of pieces, including parts for Harris Tweed looms.

Chris said: “We have now seen a number of innovative and entrepreneurial ideas go on to the next stage of their development. It is a great boon for the local community and wouldn’t have been possible without our founding sponsors, Point and Sandwick Trust. Their initial faith in the concept also allowed us to unlock further funding from agencies like Western Isles LEADER.

“Alick’s project also demonstrates that to develop a concept in the Innovation Centre, the idea doesn’t have to be at the cutting edge of high technology. We also support many other types of enterprise, including traditional industries.”

He added: “What I particularly like about Point and Sandwick Trust’s approach to development and support is their forward vision. They are happy to support ‘left field’ ideas which don’t necessarily follow government agendas or traditional modes of thinking, but look to the future, treating each application on its individual merits. For example, they recognise that high-technology is the key to success in the modern world and, due to its great human resource, the Western Isles can flourish in the area – provided that it is given key support to grow.”

Alick said it was “fantastic” to win – twice – at the awards. His name was the first one read out for a prize – the design award – and Alick thought: “Great – I’ve won something. I’ll just sit down now and relax.” Then a few minutes later my name was called out again. “I was completely shocked. I thought, ‘what? Are you sure this isn’t a mistake?”

Alick’s design is for a new concept of boat trailer which should work for various sizes of boats and shapes of hull. The next steps will be checking patents and finding the money to build a prototype  – “to check it’s a workable idea rather than a nice idea” and then fine-tuning.

The idea was a case of necessity being the mother of invention as Alick was fed up struggling to get his own boat – a 16ft used for fishing – on and off a trailer and into the sea. He was having to drive the tractor into the sea “up to its belly” and described the process as “awkward and difficult”. He explained: “If it’s a shallow shore, you can’t get enough depth without having to reverse right out into it, till the boat is almost floating and even then you’ve got to get your shoulder against it. If you had a big heavy boat, it must be an absolute nightmare.”

Although it was designed for his third year project, Alick had been thinking about his new design concept as a potential product for market from early on, after encouragement from his lecturers. His development is on hold until after May as he is working for his final exams. But from then on, it will be full steam ahead.

“I’m really excited about it,” he said, “and the support and the encouragement I’ve had from all the guys at the Innovation Centre and all the guys in the engineering department has been amazing. They’re so encouraging. They just want to see things developing, especially locally, and all of them are experts in their own rights, in their own fields.”

Alick had done a year of engineering at the Glasgow Nautical College after school before going to sea for a year as part of cadetship training. Due to personal circumstances he left engineering and had no plans to return until relatively recently. He admitted that, due to a lack of confidence from his time at sea, it was only in the third year of his degree – and after good results – that he started to “believe that I knew engineering”. It had taken, he said, “years of rebuilding”.

Alick is the second Lews Castle College student to hit the headlines for their accomplishments with the help of the Innovation Centre.

Matthew Murray made the news last summer after his undergraduate paper about a new engine concept for supersonic jets was published in a prestigious peer-reviewed journal.

And, similarly to Alick, Matthew had ‘not seen himself as academic’ until he began to see success in engineering with the help of the college and the Innovation Centre.