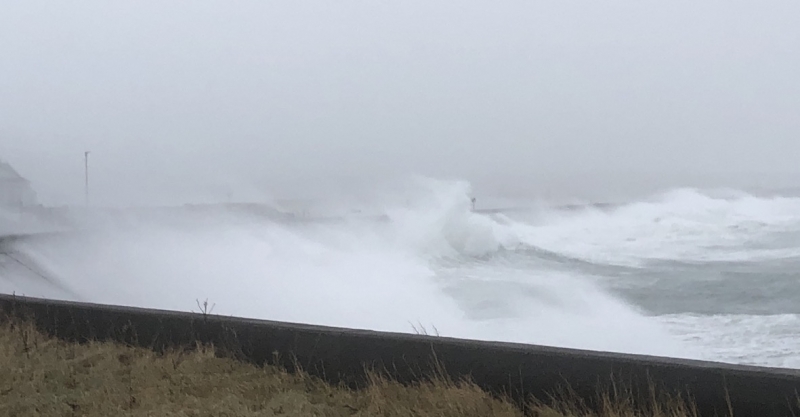 The battering of the nameless storm which struck the Islands this morning is expected to reduce this afternoon…before the build-up starts to tomorrow's storm.

Roads were closed, ferries cancelled or delayed and other services disrupted as the weather system swept across the Hebrides.

Tempers flared over the latest closure of the Braighe Causeway near Stornoway.  HM Coastguard said at 12.45pm that they were “dismayed to report” abuse offered to their volunteer team by an individual who then chose to attempt to cross the Braighe during dangerous conditions.  A Coastguard spokesman said: “We re-iterate that this closure is for public safety, we appreciate the inconvenience and services will re-open the road as soon as deemed safe. Please bear with us, we are there for public safety.”

The Braighe Causeway (A866) was closed for four-and-a-half hours before being reopened to traffic around 2.23pm today.

At  9.50am today (Saturday February 15) HM Coastguard Western Isles, Skye and Lochaber announced on Facebook that it was closing the Braighe causeway at the request of Highland Islands Police Division.

HM Coastguard Western Isles, Skye and Lochaber stayed in attendance at Point side until about 1.30pm, while Comhairle nan Eilean Siar took over the town side closure from Police Scotland. The Coastguard left the town side about 11.15am.

Police Scotland warned after the Braighe link between Point and Stornoway was closed yesterday morning at 9.35am that "There may be similar disruptions at high tides this evening at 11.10pm, Saturday at 11.30am and Sunday at 12.15am.

"Please take this into consideration when planning travel around these times. We will continue to update."

The Coastguard later stated: "We’re dismayed to report that our team were subject to abuse this morning by an individual who then chose to attempt to cross the causeway. We reiterate that this closure is for public safety, we appreciate the inconvenience and all services will reopen the road as soon as deemed safe. Please bear with us, we are there for public safety.

Once conditions have improved, road cleaners from Comhairle nan Eilean Siar removed all debris from the route before it was reopened to traffic.

Since the previous storm period, it has been agreed by local authorities that there will be no intermediate stage of closure, no convoy systems or partial reopening.  Given that today's high tide was not until 11.22am and that there will be a far longer period of closure while the road is cleared as a result of the new policy, it was not expected that the road would reopen until well into the afternoon.

Notices of disruption have now been posted on all 28 of CalMac’s west coast and Hebrides routes.

The Sound of Barra service was cancelled this morning, with a review due at 2.30pm regarding this afternoon’s sailings. There is no sailing scheduled between Oban and Castlebay today and a review this afternoon will decide whether Sunday’s service will run..

On the Uig triangle all morning sailings were cancelled and a review is due at 1pm for a revised timetable, starting from Lochmaddy at 4.10pm and serving Uig, Tarbert and Lochmaddy. This is intended to run this afternoon and evening, weather permitting, during a lull in the gales.

On the Stornoway Ullapool route, MV Loch Seaforth is expected to run to schedule from 6.30pm, leaving Ullapool. Freight services tonight and passenger services tomorrow are under warning of disruption and cancellation.

This morning’s Sound of Harris service was cancelled and a review is due at 1pm regarding sailings from 2.40pm onwards, departing Berneray.

Sailings between Mallaig/Oban and Lochboisdale are cancelled today and in doubt for tomorrow.

Power out in Lochs, North Uist

Today some customers in Lochmaddy and in the Grenitote and Solas area of North Uist are without power after wires came down around 8am. SSEN engineers are on site and it’s expected that supply will be restored by 1pm.

Loganair has implemented their flight-change offer for passengers due to fly during Storm Dennis tomorrow (Sunday 16 February).

The airline’s offer is available for passengers flying to or from Barra, Benbecula or Stornoway.

A Loganair statement says: “In view of the high winds forecast and potential for travel disruption, if you are booked to travel on 16th February, you can choose to re-book on an alternative flight between now and 23rd February on a first-come, first-served basis.

“The easiest way to change your flight is to access www.loganair.co.uk/managemybooking

"If you cannot find a suitable alternative there, please call on 0344 800 2855 with your booking reference handy and we’ll do our best to help.

“If you choose to remain with your original travel plans, please rest assured that we will do everything that we safely can to fly you to your intended destination as close to the scheduled time as possible.”

Storm Dennis will bring some very strong winds and transport disruption during Sunday and into Monday morning. There's a Yellow Warning for Wind across Outer Hebrides and Highland from 10am tomorrow to midday on Monday.
What to expect
•    Some delays to road, rail, air and ferry transport are likely
•    Probably some bus and train services affected, with some journeys taking longer
•    Delays for high-sided vehicles on exposed routes and bridges likely
•    Some short term loss of power and other services is possible
•    It’s likely that some coastal routes, sea fronts and coastal communities affected by spray and/or large waves

Some very strong winds are likely in association with Storm Dennis. Gusts of 50-60 mph are likely quite widely within the warning area for much of the period. Gusts to 70 mph are likely at times, more especially across western Scotland on Sunday afternoon into Sunday evening with a separate swathe of 70 mph gusts probably crossing northern Scotland and Orkney for a time early on Monday.

Reason for update
The warning area has been extended north to include Orkney and the overall impact level has been changed to low. The start time has been brought forward by a couple of hours.