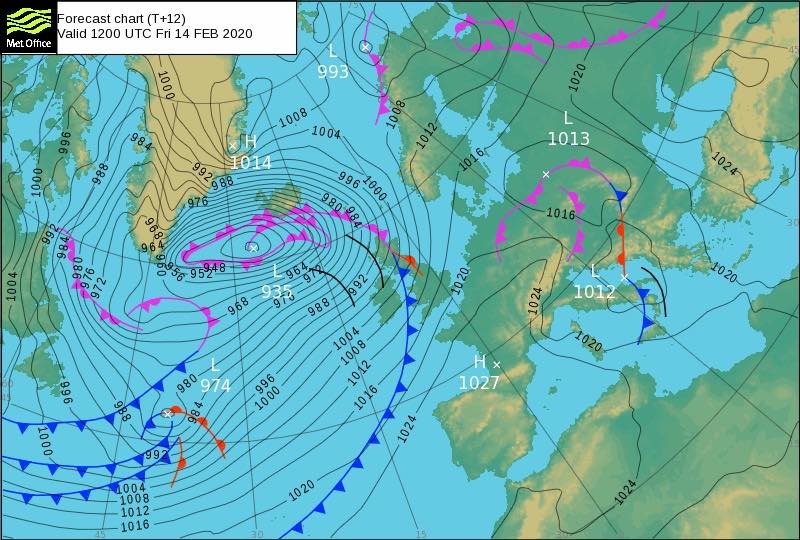 A new weather warning has been issued by the Met Office for strong gale force winds between 6am and 12 noon tomorrow (Saturday 15 February).

Issued just two hours ago (12 noon, Friday 14 February), this warning comes on top of existing warnings for strong winds across Scotland, but is specifically for the Western Isles and Skye, the only areas to be directly affected within this warning.

The warning says that severe gales on Saturday morning may lead to some transport disruption, with delays to ferries and air transport likely and the risk of coastal spray leading to road closures.

Impacts are now seen to be ‘likely’ with severe gales gusting to 70mph for a time on Saturday morning.

CalMac’s Stornoway office have agreed a revised timetable for the Stornoway Ullapool ferry over the next 24 hours (Friday 14 to Saturday 15 February) to take account of incoming gales.

Saturday morning’s first passenger service has been brought forward by 1.5 hours and will now leave at 5.30am, with latest check-in time at 5am.

For passengers booked to travel on to Inverness by Citylink bus there will be a wait at Ullapool, as the bus cannot be brought forward due to its function as a service bus on the route. The CalMac terminal at Ullapool will be open for passengers awaiting the bus.

However, all services remain weather dependent, with all Sunday and Monday services on yellow alert for disruption or cancellation at short notice.

The first of two deep low weather systems coming in from the Atlantic is bringing a wave of windy weather from today (Friday 14 February), before Storm Dennis strikes on Sunday.

Today’s noon Met Office chart (pictured above) shows two low pressure fronts moving across the Western Isles from the south-west, with a deep low of 935mb today and Storm Dennis, the fourth named storm of the season, following behind at 974mb. This means two successive waves of wet and windy weather.

The Met Office updated a storm warning for Sunday and Monday at 11am today, saying that there is a potential for very strong winds to develop in association with Storm Dennis between 12 noon on Sunday and 12 noon on Monday across Scotland. Coastal spray, travel disruption and power cuts are among the possible impacts of the storm.

The Braighe causeway between Point and Stornoway was closed to traffic in both directions, as spray and debris affected the carriageway around high tide this morning. Police and Coastguard teams were on site monitoring conditions.

Power out in South Uist

South Uist is feeling the first impacts of a period of what Scottish and Southern Electricity Networks (SSEN) calls “a period of unsettled weather”.

Reported damage to one of the overhead power connectors has led to 179 customers in the Loch Carnan area losing power just before 9am today (Friday 14 February). Two teams of engineers are on site but have not yet identified the fault. Nevertheless, they are expecting to restore supply to all households by 12 noon.

During Storm Dennis, SSEN's current forecast predicts heavy rain and wind gusts in excess of 70mph forecast. SSEN would like to reassure its customers it is well prepared to respond to the impact of Storm Dennis on the electricity network and is asking anyone concerned about the potential disruption to supplies, particularly those who may need extra support during a power cut, to call its teams on 105.

Ferries across the west coast network are being affected by the severe weather, with the Castlebay Oban service cancelled for the day and scheduled for review on Saturday, and just one attempt due to be made from Ardmhor to Eriskay around 11.10am – all sailings thereafter are subject to disruption.

The Lochboisdale Oban/Mallaig service has been cancelled for the day and the Sound of Harris service was cancelled this morning and is to be reviewed at 12 noon for afternoon sailings.

Services on the Uig triangle are running approximately two hours late and subject to further disruption.