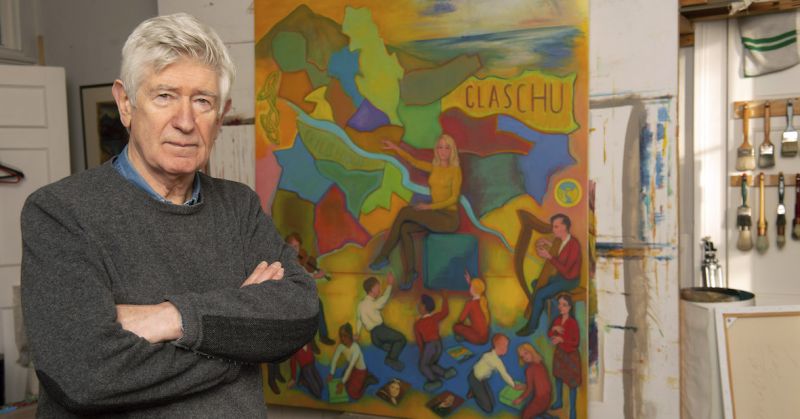 The impact of modern Gaelic culture is continuing to grow in Glasgow. In fact, Glasgow is home to the largest number of Gaelic speakers outwith the Highlands and Islands and a growing number of citizens are speaking it, learning it and participating in Gaelic cultural events.

A painting celebrating Gaelic culture in Glasgow has been unveiled. The distinguished painter Alexander “Sandy” Moffat – who was artist-in-residence to the Royal National Mòd 2019 – has created an impressive artwork inspired by Gaelic culture at the festival and the vibrant health of Gaelic medium education in the city.

The painting was commissioned by Glasgow Life in partnership with The Hunterian and the University of Glasgow, to celebrate the Mòd’s return to Clydeside for the first time since 1990.

As artist-in-residence during the October festival, Sandy Moffat OBE RSA immersed himself in the atmosphere and events, and spent time researching the city’s Gaelic past and present.

He then spent several weeks working on a huge, 6ft x 5ft canvas, which includes references to Gaelic history and culture, both in Glasgow and across Scotland. The finished work was unveiled at the City Halls last weekend as part of Celtic Connections.

Celebrated for his own famous works, including Poets’ Pub and Scotland’s Voices, Moffat is also a former head of painting and printmaking at the Glasgow School of Art, who is widely credited with igniting the resurgence of figurative painting in the city by inspiring future greats such as Peter Howson, Alison Watt and Ken Currie.

Speaking about his Mòd commission, Sandy Moffat says: “There were two starting points. The first was a dish towel I bought at the Glasgow Royal Concert Hall during the Mòd. The design was based on a medieval map dating from when Glasgow was primarily Gaelic-speaking, showing the Gaelic place names for all the districts of the city.

“The second influence was Gaelic education. After the Mòd finished, I visited the Glasgow Gaelic School in Berkeley Street, and was really impressed by the whole atmosphere of the school.”

Moffat was struck by the children’s grasp of the language and by the creative atmosphere within the school. “It was a blaze of colour,” he recalls, mentioning the décor, artworks on the walls and even the children’s bright red sweatshirts. “It was like walking into a Matisse painting,” he laughs. That vibe is evident in his effervescent finished work, which draws both from the city map and from his school visit.

The new painting also makes reference to William McTaggart’s famous painting, The Sailing Of The Emigrant Ship, which reflected on the draining away of the Highlands and Hebrides population during the Highland Clearances.

And while Moffat says he “loved every minute” of his artist-in-residency, which left him feeling “very optimistic about the future of Gaelic in Glasgow”, he adds that there are still challenges.

The Royal National Mòd took place in Glasgow from October 11-19, 2019. Before that, it had last been held in Glasgow in 1990, during its year as European City of Culture. Three decades on, Gaelic – which has been spoken in the city for centuries – is flourishing. Last summer, the revival was accentuated with Niall O’Gallagher’s appointment as the first ever Bàrd Baile Ghlaschu (Glasgow’s City Gaelic Poet Laureate).

Niall O’Gallagher will read a poem at City Halls, where Moffat’s painting is to be unveiled. The event will also include a performance showcasing Glasgow University’s innovative Gaelic Song In Performance course.

Councillor David McDonald, Depute Leader of Glasgow City Council and Chair of Glasgow Life says: “It will be fascinating to find out how the 2019 Mòd, and Gaelic culture in Glasgow has been depicted by an artist as renowned as Sandy Moffat, whose work has motivated generations of artists. I’m sure this wonderful new painting will be a real celebration of Glasgow’s proud Gaelic roots and an inspiration to our growing, youthful, vibrant community of Glaswegian Gaels.”

The Hunterian Deputy Director Mungo Campbell says: “The Hunterian is delighted to have been able to work with colleagues at the University of Glasgow and Glasgow Life to support this commission. Sandy Moffat’s painting commemorates wonderfully an important moment for the language and communities associated with Gaelic in Glasgow.”

Professor Roibeard Ó Maolalaigh, Professor of Gaelic, Vice-Principal and Head of the College of Arts at the University of Glasgow, says: “Sandy Moffat’s colourful painting artfully captures both aspects of the past and future of Gaelic in the environs of Glasgow, its deep historical roots as well as the hopes for the future.

"The University of Glasgow is at the forefront of Gaelic research, development and education supporting the growing numbers of Gaelic learners as well as Scotland’s traditional Gaelic communities. We were delighted to support this creative work showcasing the vibrancy of Gaelic in Glasgow.”