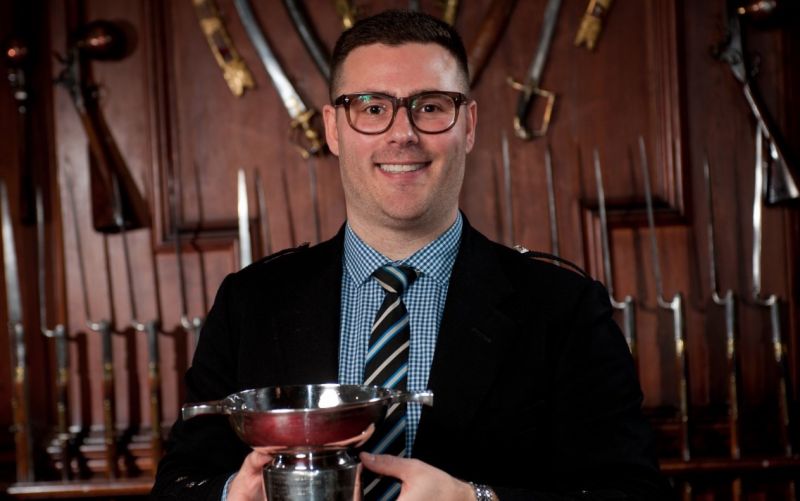 Star piper Glenn Brown, who is coming to Stornoway next week for the Lewis and Harris Piping Society’s second winter recital and workshop, has said he is “very much looking forward” to it and spoken about the “great work” the piping society is doing in keeping the music alive.

Glenn, a Canadian who won the piobaireachd competition at the prestigious Glenfiddich competition in October, will be playing in the Caladh Inn in Stornoway on Saturday, January 18, 2020 at 7.30pm, with tickets available on the door.

He will be taking workshops during the day and is the second piper to be giving a combined workshop and recital this season, following Callum Beaumont on November 9.

Glenn, a native of Ontario who now lives in Scotland, has played in Stornoway before – having taken part in the invitational Pipe Major Donald Macleod Memorial Competition twice.

He said: “I am very much looking forward to coming up to Stornoway for the recital/workshop on the 18th as it’s such a beautiful part of the world with the friendliest of people. Part of what we as pipers look forward to about competing at the Donald MacLeod Memorial is the people and their appreciation for the music. The love of the instrument. And the love for the man himself. How much he contributed to piping throughout the world is just unbelievable.”

Glenn would have qualified for this year’s Donald Macleod competition by virtue of his win at the Glenfiddich but would be unable to make it as he is a groomsman at fellow piper Callum Beaumont’s wedding in Melbourne on the same day – April 3.

Glenn said: “The work that the Lewis and Harris Piping Society is doing is just so great for piping in that part of the world and beyond. These workshops/recitals will hopefully continue on in future. Unfortunately I’m unable to compete there this year as I’ll be a groomsman at Callum Beaumont’s wedding. Hopefully I’ll be asked to take part in future years, but I’m thankful to have been asked to take part in the workshop/recital.”

Growing up in Canada, Glenn said he had heard “many great things” about Donald Macleod – the renowned piper, composer, piping tutor and Stornoway son whose legacy is remembered in the annual piping competition.

“But it wasn’t until my adult life that I fully appreciated just how much Donald did for pipers and piping in general,” he said. “He is without doubt my favourite composer. Some of the greatest tunes ever written are found in his collections of music.”

He recalled: “Before I first competed at the Donald Macleod Memorial, I had only played one of Donald’s piobaireachd – MacMurich’s Salute which I had learned from Willie McCallum. When I was teaching at a summer school in Canada in 2008, there was a student there who had attended summer schools with Donald back in the 60s or 70s. And he had these wonderful recordings of Donald playing tunes after a ceilidh one night. One of them was MacMurich’s Salute. And the feeling that he gave in the first variation was just incredible.

“Since competing up in Stornoway, I  have probably played a couple handfuls of Donald’s piobaireachd and they’re all great. Like big slow airs, full of melody and meaning.”

Glenn said the principle of combining a workshop and recital was “very good” – “it’s great to be able to hopefully show some people some new things or different ideas and then combine it with a bit of playing” – while the founder of the Lewis and Harris Youth Pipe Band hailed it as “a wonderful opportunity” to inspire young players.

Anna Murray, also senior piping tutor for Comhairle nan Eilean Siar for the Loch a Tuath area and The Nicolson Institute, said: “There’s so much interest in piping with the young players today – it’s really essential that they get to hear these top class players. They were so inspired at the last recital, meeting Callum. The workshop was fantastic and he was so lovely to them but their reaction in the evening when they watched him play and heard what he could do with a set of bagpipes… their jaws hit the floor; they couldn’t believe their ears.

“When you’re teaching, you can say to the children, ‘go and listen to this person or that person’ but it’s no substitute for them actually being in the same room and hearing the top grade pipers. After they’ve heard such amazing playing, they don’t need to be asked twice to practice when they get home, which is great. They’re just so enthused. They are really looking forward to the next recital. It’s fantastic that the recitals are happening again and that it’s a series of recitals.”

A programme of recitals was a regular feature on The Lewis and Harris Piping Society’s calendar from the time it was formed in the 1970s until about a decade ago, with anything up to six recitals in each series, and the best pipers in Scotland were invited then too. Then, recitals were held in the Royal Hotel and latterly the Royal British Legion Club  but it had been “a bit beyond their means” to bring in star pipers in recent times, due to resources.

However, Piping Society chairman Dr Smith said “a very generous donation from a private individual” had made it possible for them to organise a winter recital programme for 2019/2020 and they hoped to hold four recitals in the series. Tickets for the recital will be £10, £8 concession, and under 16s get in free.

Picture: Glenn Brown with the piobaireachd trophy at the 2019 Glenfiddich competition.