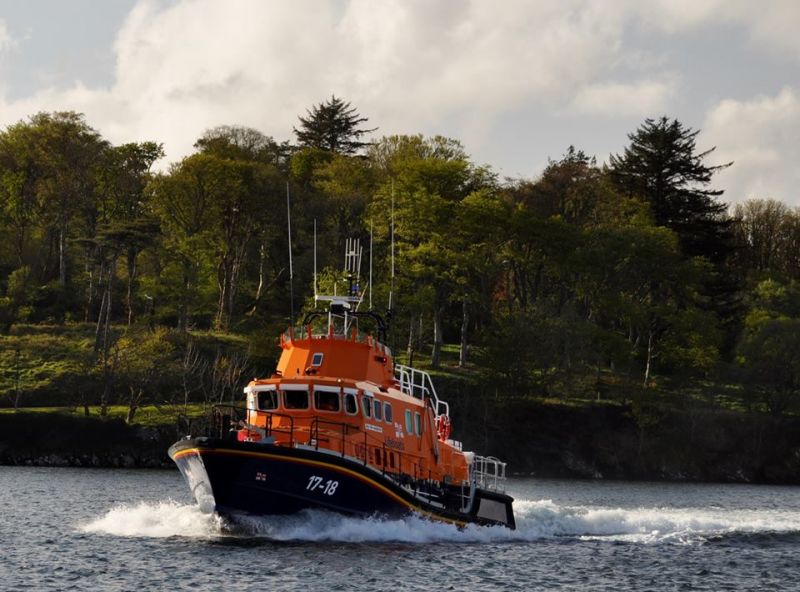 Stornoway’s RNLI Coastguard crew had their first shout of 2020 last night (Saturday January 4th), working through the night on recovery of a fish-farm vessel drifting off the west coast of Lewis.

Stornoway Coastguard operations centre took a call for assistance at 3.58pm yesterday from the 50-metre fish-farm support vessel Hydro Pioneer, which had lost power, with an alarm sounding on an engine, off the coast near Barvas.

The RNLI crew of lifeboat Tom Sanderson was immediately tasked and launched at 4pm, while Coastguards also issued a ‘pan pan’ general call for help to all shipping.

Coastguard Rescue Teams from Bragar and Ness were sent to the land overlooking the site in case they were able to provide any assistance. The lifeboat was on-scene by 6.30pm, quickly followed by a fellow fish-farm workboat from East Loch Roag, the Helen Mary.

Her crew had responded to the emergency call and were able to take the casualty vessel, with five crew aboard, under tow. The lifeboat stood by to provide safety cover as the tow continued towards the Butt of Lewis and Stornoway harbour.

In rough seas and with winds blowing force 5-7, reaching force 8 south-westerlies later in the night, the tow parted frequently, so Stornoway Coastguard officers took the decision to task the Coastguard tug Ievoli Black, which was on patrol in the seas near Shetland.

Ievoli Black met the fish-farm vessels close to Ness around 2am today (Sunday) and attempted to take over the tow, but the weather was against the crews and in the end both rescuer and casualty vessel sought shelter in Broad Bay.

Stornoway RNLI crew were stood down soon after 6am as the crew of Ievoli Black worked to re-establish the tow. Once secure, the rescuing vessel Helen Mary headed for Stornoway harbour while Ievoli Black followed more slowly with the casualty in tow.

The Coastguard tug is too large to enter the inner harbour, so the Helen Mary came out to meet the casualty and take the tow over once again at 4.30pm today.

Both vessels came alongside around 5pm with all on board safe and well.

A coastguard spokesman said: “This was a long stint for the RNLI crew, who were at sea for more than 14 hours. The weather made the task more complex and we are pleased at the outcome.”