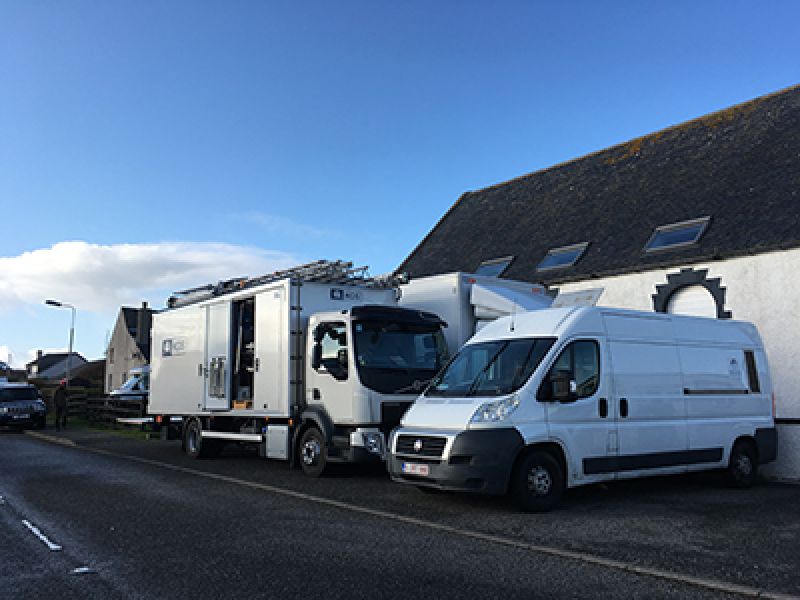 The production company involved in a feature film on location in Lewis have given further details of disruption that local residents can expect while they are at work.

The international crew at Versus productions are working on a Belgian-Scottish-French co-production called Wise Blood, scheduled for release in early 2021.

Location manager Davie Burt told welovestornoway.com that there would be some disruption for local residents, but that the crew were doing their best to avoid disturbing the local population too much. He said: “Our schedule can be very fluid as we work around the unpredictable weather that shooting in October and November brings, but we have outline timings for the next week or so.”

Today (Monday October 28th) the crew started at 6.30am at their location in Portvoller and have technical vehicles parked on the street (pictured) until 4.30pm.

Tomorrow (Tuesday) there’ll be another 6.30am start, this time at Lochs Free Church, Crossbost. There’ll be technical vehicles parked at the top of street and the road is expected to be closed to public, with local access only. Filming finishes at 4.30pm.

On Wednesday the location for filming is Stornoway Town Hall, where technical vehicles will be parked, from 6.30am, on the Star Inn’s private parking area at Quay Street, after the crew have finished unloading equipment in Point Street.

There’s a 7am start on Thursday for filming on croft land between Achmore and Lochganvich, with stop-and-go traffic management in the area to allow trucks to offload equipment and to manage sound while filming.

The Pentland Road will be closed on Friday (1st November) between Carloway and the Breasclete junction, from 7am to 4.30pm. This is to allow filming at a peat bank on Pentland Road. Signs informing residents of the local closure will be in place from Thursday night onwards.

Saturday 2nd November is being held in reserve for filming at Achmore, in case of poor weather on Thursday. If this does happen, the same traffic management plan will be used as on Thursday.

Next Monday and Tuesday (4th and 5th November) a full road closure will once again be in place at the Pentland Road between Carloway and Breasclete Road junction, from 7am to 4.30pm.

Any changes or additions to the filming schedule will be updated via welovestornoway.com as the week progresses.

Picture: technical vehicles will be parked on the road at some locations, as today in Point.