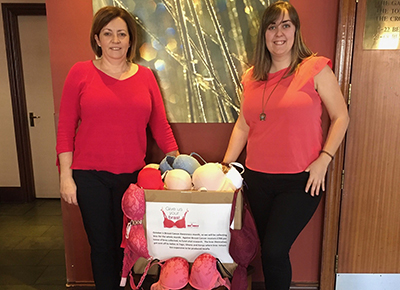 Time for a bra throw-out!

If it’s been a long time since you cleared out your underwear drawer, now is the time to turf out any old bras!

That’s because October is Breast Cancer Awareness month, and the women of Lewis and Harris are being urged to chuck out old bras as part of a drive to fund life-saving research.

Karen Macdonald of Harris has been running her any-old-bras collection since 2013, when a feature on Lorraine Kelly’s morning TV show got her started.

She told welovestornoway.com: “We’ve all got drawers full of bras, but we only ever wear a few favourites. If you chuck them my way during October I pass them on to the charity Against Breast Cancer, who get £700 per tonne collected towards their research campaign.

“It doesn’t matter what condition they are in – those grey bras that accidentally went into the wash with your dark clothing, sport bras, crop tops, anything.”

The charity Against Breast Cancer says: “The same bras also help to support small businesses in Africa. Together with our recycling partners, our textile recovery project prevents these bras going into landfill before giving them a new lease of life in developing countries such as Togo, Ghana and Kenya, where bras remain too expensive to produce locally.

“Successful ventures like this keep many families in developing countries out of poverty whilst providing employment for people at home in the UK. Any bras that are genuinely beyond redemption are dismantled and disposed of properly.”

It’s win-win for your unwanted undies, and Karen says island women have taken the message to heart.  “The first year I just got about 80 bras, but last year it was close to 300 that I sent away. The collection is only supposed to be in October, but now that people know that I collect them they do tend to drop them in whenever they have a clear-out.”

Karen’s collection point is at Brownie’s in Tarbert, where she works, and for the past three years she’s been supported in Stornoway by Nicola Nikpavlovich at the Caladh Inn – where this year three bin-bags full of bras have already been collected.

Nicola told welovestornoway.com: “There’s been a phenomenal response from Stornoway this year and, because it’s Wear It Pink day for breast cancer awareness today (Friday October 18th) we’re hoping to see you turned out in pink and carrying a bag of old bras!”

The bra collection continues at Brownies and the Caladh Inn reception until October 31st.

Picture shows Nicola (right) and Caladh Inn manager Christina Miller wearing it pink with some of the donated bras.