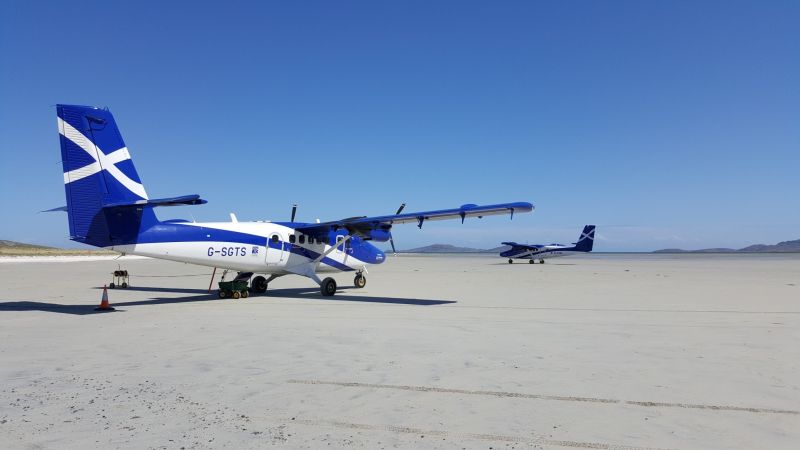 Planning for a sandy landing

Transport Scotland announced early this month (October) that Loganair has been awarded the essential air service contract to serve Barra, Campbeltown and Tiree from Glasgow for a further four years.

We’re delighted and privileged to be chosen as the operator for these vital air links.

How do you decide – up to a year in advance – the times of flights to an airport where the beach is the runway, and the tide washes the runways twice a day?

That’s our challenge in Barra – the world’s only beach airport with a scheduled air service.

It all starts with the UK Hydrographic Office tide tables.  These are published up to two years in advance, forecasting both the time and height of the high tide.

We then look at the height of the tide.  If it’s a tide of 3.1 metres or less, a flight has to be airborne from Barra at least 30 minutes before high tide and can’t be scheduled to land until 30 minutes afterwards once the tide-washed beach will be usable again for flight operations.   If it’s more than 3.1 metres, we have to leave extra time (again, calculated to a set formula) before we can plan flights – after a 3.6 metre tide, we have to wait for two and a half hours, which means a “runway” closure of five hours in all around the times of high tide.

It’s not quite that easy though.  As Barra is an airport where our pilots fly visual approaches and we don’t have the instrument landing aids found at larger airports, we can only fly in and out in daytime.   We therefore have to layer the hours of sunrise and sunset over the tide calculations to see when we can fly – and around the shortest day of the year in December, a combination of daylight and tides can mean that our window of opportunity to plan a flight to Barra can be as little as 45 minutes.

After that, we then look at all of the other usual criteria like crew working time, availability of slots at Glasgow and – importantly - how the Barra services fit with our flights to Campbeltown and Tiree that are all operated by the same fleet of Twin Otter aircraft supported by Transport Scotland, an agency of the Scottish Government.  We also have to leave a separation gap between each flight given the procedural nature of air traffic control into Barra.

It’s certainly a unique challenge for Richard Craig, our Schedules Planning Manager, and one that none of his colleagues in the industry have to work with!  The process has been carefully refined over many years – we’ve flown to Barra since 1974 when Loganair took over the route from BEA’s Scottish Division.

Do we always get it right?  Well, yes - but we can’t avoid occasions when the elements conspire to confound our planning, such as when spells of low pressure mean that the tide’s regression from the beach is slower than usual, or if strong winds keep the tide up the beach.

But if you’re wondering how we can say with certainty that our flights to Barra in 2020 will operate at a given time – which changes from one day to the next – then it’s the output of work which has been taking place in Loganair for the 45 years [so far] in which we’ve been custodians of Barra’s lifeline air service.