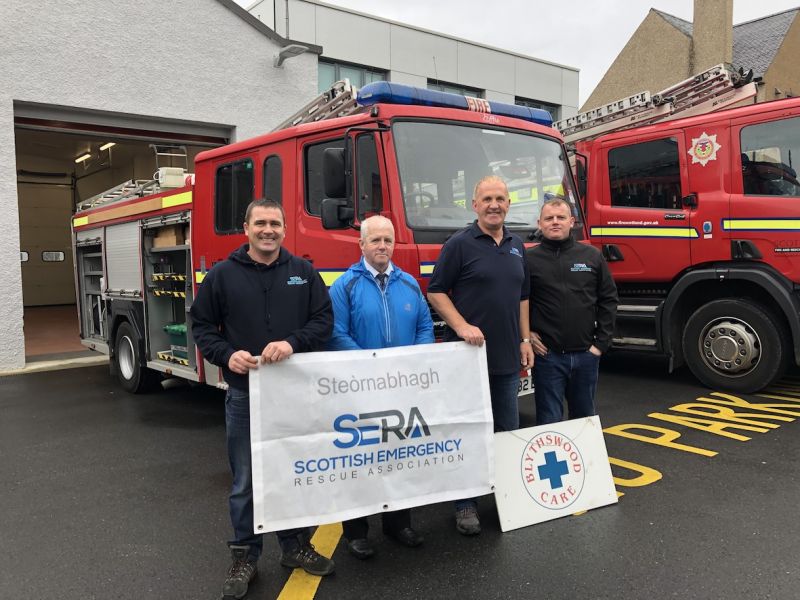 Another day, another mission for the Scottish Emergency Rescue Association and their Stornoway group in particular.

At the weekend, they begin another 2,200-mile journey from Stornoway to Nisporeni in Moldova with another reconditioned and re-equipped fire engine, and also an ambulance.

The group say: “The amount of support we have had over the past months have been amazing.”

Many representatives of those supporters were present yesterday when the latest fire engine and its equipment was unveiled. (The ambulance in the photograph is not the one actually going to Moldova.)

The group say on Facebook: “A massive thanks to Norrie and his team [at Norrie’s Garage] for servicing the appliance by fitting new fan belts, oil change etc.

"Thanks to Nomie’s Garage for welding the windscreen of our appliance, saves us hundreds of £s.

“Thanks to Highland Fuels who donated their day’s takings at the Lochs Show as well as stress tractors, pens and coffee mugs.

“And thanks to the Lochs Show for allowing SERA to be part of the car raffle and to Jon Hearach Memorial Ltd for a cheque of £150 to help us get some much-needed equipment for our trip.  And also to Macaulay Askernish Ltd.

“Massive thanks the Home Improvement Centre, Bells Road, Stornoway.  This is the second year they have supplied us with portable lighting, tools, toolboxes etc.  SERA would also like to thank HIC’s suppliers, Davie Crawford and John Craig of Toolbank for this much appreciated donation. These tools will play a major part in RTCs, saving lives for years to come

“Many thanks to Stornoway Free Church, Kenneth Street for raising funds for Blythswood and SERA at their soup and pudding lunch.”

And there have been many more supporters, great and small.

Ian Murray explained that it was his seventh trip to Moldova and emphasised the level of equipment which had been available to the Moldovan crews was negligible before the missions began.  They accessed burning buildings without breathing apparatus, the only safety precautions being to crawl into the properties with a rope attached, so they could be pulled out if they became unconscious.  Now SERA had a unit in Edinburgh which checked breathing apparatus being withdrawn in Scotland – it gave 20 minutes of activity for the firefighters and was being replaced with units giving 30 minutes.  The older apparatus was then being sent to Moldova.  Other equipment being supplies included tools to make rescuing the victims of car accidents easier – and the ambulance is intended to travel with the firemen to accidents and make it possible for the victims to be rushed to hospital.

Local support had been needed to supply all the equipment on the reconditioned fire appliance – everything from hoses to wooden blocks to enable vehicles wheels to be immobilised.