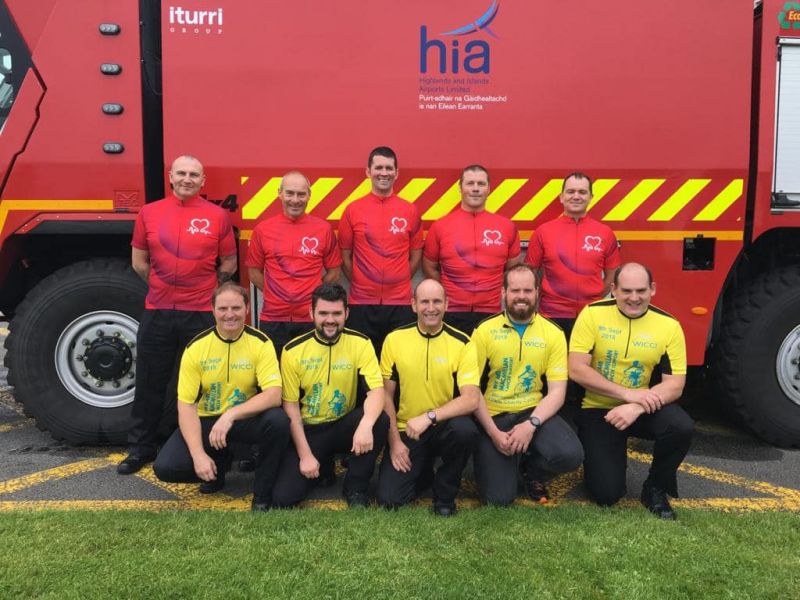 The 13 cyclists on the airport2airport charity cycle include 11 from Stornoway and two from Benbecula – firefighters, security staff and air traffic controllers, all determined to cycle a full 100 miles to raise money for two charities.
They’ll be leaving Stornoway at 6.30am in a minibus donated for the effort by Mackinnons and expect to catch the 8.25am ferry at Leverburgh, en route to Benbecula airport. Highlands and Islands Airports Ltd have sponsored the ferry crossings, and mechanical support is being provided by Bespoke Bicycles’ Alistair Glover, who is taking along a mobile bike repair unit.

Duncan Macleod of the Stornoway Airport firefighters told welovestornoway.com, today: “We’re hoping to catch the 1.30pm ferry from Berneray on the way north, and want to get in as many miles as we can before that, so that we’re not left with too many between Leverburgh and Stornoway.

“If we need to make up miles later in the day to hit the round 100, we’ll be detouring at Leurbost or Achmore to add a few more. The forecast is for the wind to come round to the south tomorrow, so it’ll be on our backs and the stronger it blows, the quicker we’ll get there!”

The two charities to benefit from the effort are British Heart Foundation Scotland and the Western Isles Cancer Care Initiative. The group are hoping to match the total £6,000 raised last year when they cycled lighthouse to lighthouse from Scalpay to the Butt of Lewis.

They’ve been helped in that aim by island businesses, who have made generous donations for a prize draw. Two Loganair tickets to anywhere in the network, a martini gift set from Harris Distillery and an Essence of Harris gift set are among the goodies that can be won.

Anyone who makes a donation online or signs a sponsor form will be entered into the prize draw, with an equivalent number of tickets, pound for pound, allocated against their name. Tickets are also being sold directly by the team members.

By 9pm tomorrow night the lucky 13 are hoping to return to Stornoway airport to a spectacular welcome from airport staff and supporters, and they also hope to see donations soar as they complete the 100 milb e journey.

You can donate online to either of the charities by these links: British Heart Foundation Scotland https://www.justgiving.com/fundraising/stornoway-airport-SAAS69-to-70070 and Western Isles Cancer Care Initiative https://www.gofundme.com/f/airport2airport-100-mile-charity-cycle.

The picture shows some of the team looking bright and breezy ahead of the challenge.