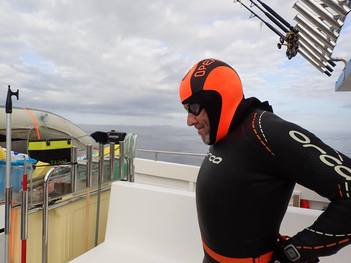 Minch Swim 2 is good to go

The date has been set for the second of this summer’s Big Minch Swims, with swimmer Paul Finnegan set to embark on his attempt tomorrow evening (Saturday August 24th).

Harris councillor Paul, who works for Harris Voluntary Service, was due to be swimming alongside Minch king Colin Macleod in June, but a bad chest infection set back his training and he was then due in Gibraltar, where he was one of the coaches for the NatWest Island Games Team.

The end of August has been his target date for some weeks, but he needed all the factors working in his favour – a good weather window, the support boat and kayakers ready to accompany him.

Now he has kayakers Robert Emmott of Back and Phil Jones, who stays in Harris, set to accompany him and skipper Donald ‘DK’ Macdonald with his boat Endeavour ready to provide support. DK also provided the support vessel for Colin’s successful Minch crossing.

Paul will be following the route forged ahead of him by Colin, swimming from Gairloch to Lemreway, touching rock and then being taken aboard the support boat to be landed at Stornoway. He’s aiming for a 6pm start on Saturday and hopes to touch land in Lewis around 8pm on Sunday. 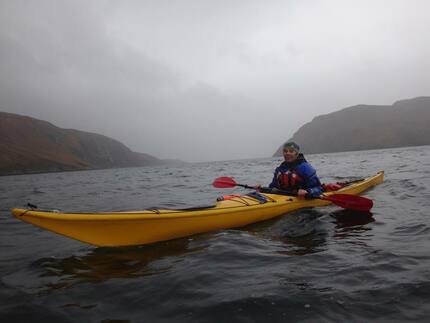 As an added boost, Colin Macleod himself will be aboard the Endeavour, to give support when things get hard.

“Having Colin there alongside me will help me to keep going when it gets really tough. I’m a slower swimmer than he is and I am expecting my swim time to be around 26 hours, so having someone there who knows what it feels like will make all the difference.”

Paul will need all the help he can get – starting later in the season means he’s got less daylight hours and will be swimming the first part of the route in darkness. The weather is also more likely to be unpredictable.

But Paul’s no stranger to pushing against the pain barrier, having completed the punishing Marathon des Sables in 2017 – a 250km ultra-marathon in the Sahara desert.

Added to that, he has the incentive of raising the money for his designated charity, and that’s the main reason why he has decided to go ahead with his challenge, despite the fact that circumstances seem to have conspired against him.

Paul told welovestornoway.com: “I said I would do it, so I plan to carry on. I’m supporting Western Isles Community Care Forum, who provide support and advocacy for so many people across the islands. They have been on standstill funding for five years and find it increasingly hard to fill the funding gap of £10,000 which they are left with each year.” 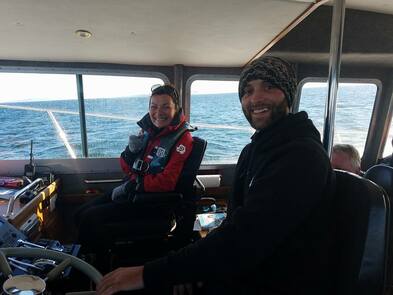 He has also been inspired to carry on with this and other challenges by the example of Donald Mackinnon of Cluer, Harris, a wartime convoy survivor who held the record for the highest number of swimming awards. Paul said: “There’s a memorial to Donald at the sports centre in Tarbert and his determination to keep going despite everything is recorded in the book Survival Against the Odds by Donald J Macleod. I always think of him when I’m swimming.”

You can donate in support of Paul’s challenge at https://www.wiccf.co.uk and follow him via the live tracker which will be active on http://theminchswims.co.uk.

Pictures show Paul suited up and some of his support team, Robert Emmott and DK Macdonald, skipper of the Endeavour.