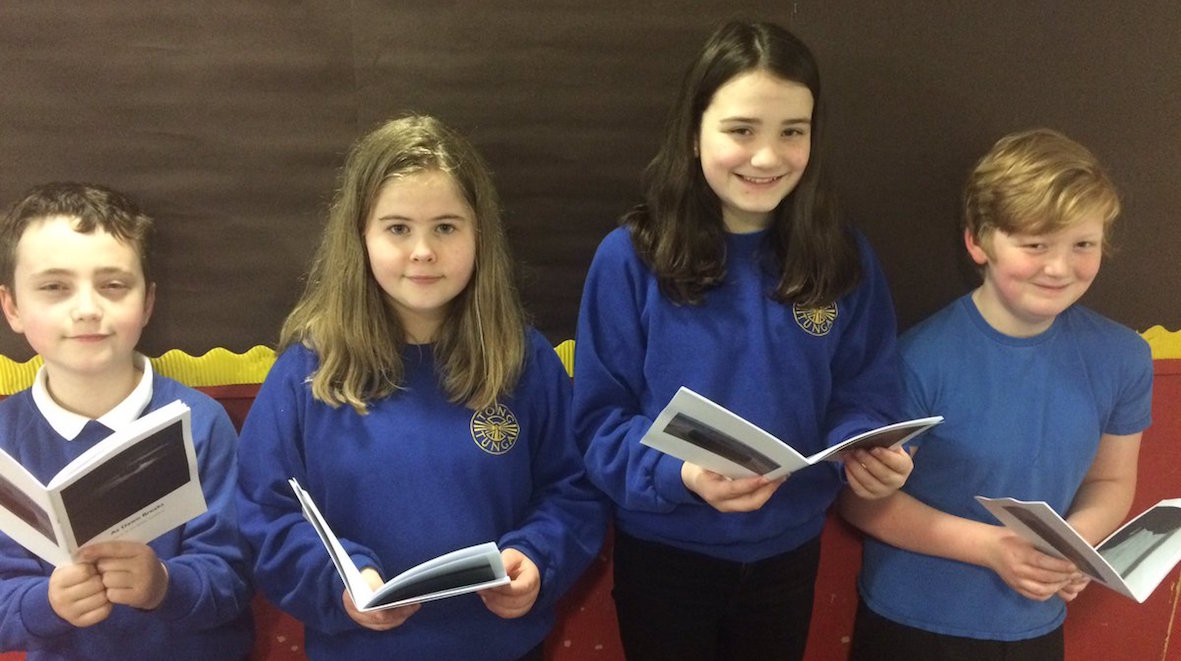 Reflections on the Iolaire tragedy by primary school pupils in Lewis and Harris have been turned into a book of poetic tributes, thanks to an arts project organised by An Lanntair.

Pupils from Tong, Back, Point, Tolsta, Breasclete and Sir E Scott primary schools were all involved in workshops with Edinburgh poet Ken Cockburn in December.

Trips to view the Iolaire memorial at Holm, and the exhibition commemorating the tragedy at Museum nan Eilean, triggered the ideas which came together during workshop sessions in An Lanntair.

Now the words of the school pupils have been brought together in a book called ‘As Dawn Breaks – Poems for the Iolaire Centenary’ and the young writers are absolutely delighted to see their words in print.

Tong school head teacher Caroline Maclean said: “The pupils really are pleased – they didn’t know the poems were going to be in a book.”

Tong’s pupils were from P6 and P7 classes, each contributing ideas to create a collaborative poem called ‘A Tragedy Unfolds’:

Others looking longingly at family photos.

They never knew the rocks would be in their way.

Midnight is here. The ‘Iolaire’

is sailing towards Stornoway pier.

The men are eager to get home.

Some are singing and dancing,

others too tired to celebrate.

The Beasts of Holm became the enemy.

The waves are pulling them underwater.

No one knows what to do –

there’s shouting, everyone is panicking.

knowing that this was the end.

A brave man took a risk

Hauled a rope around a rock

Praying the men would make it across.

haunting the island for ever.’

The book ‘As Dawn Breaks’ will be available at the An Lanntair shop over the next few weeks and features works by all the participating schools.

Pictures show Tong School pupils with their advance copies of the book and pupils hard at work with poet Ken Cockburn in An Lanntair’s exhibition space in December, with stained glass work by Alec Galloway on display