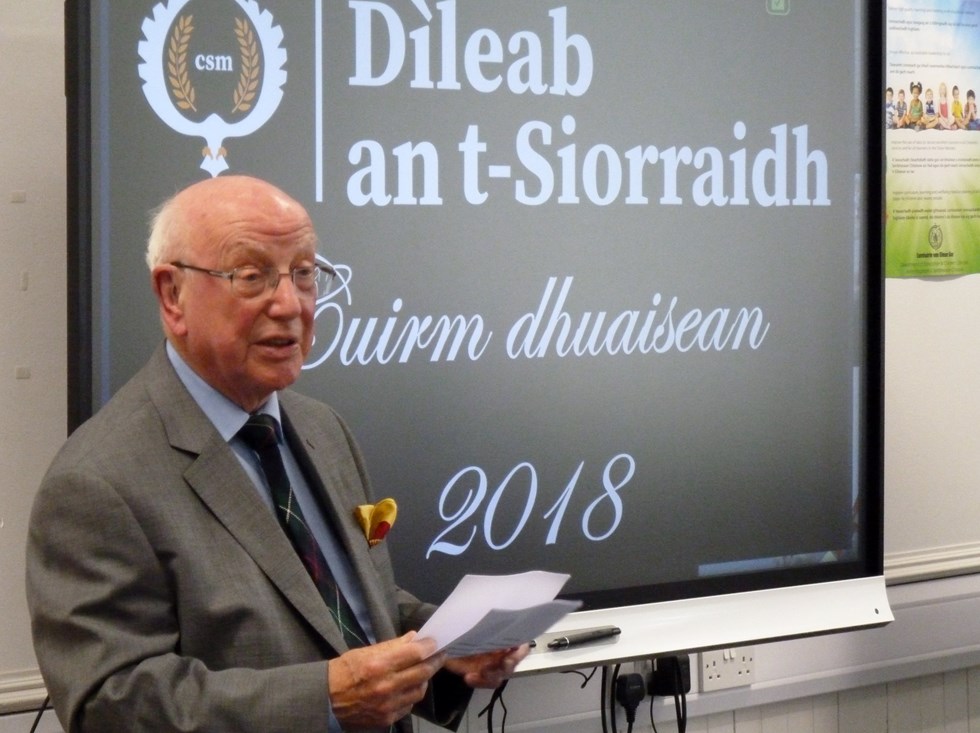 Former Sheriff Colin Scott Mackenzie will be heading to Buckingham Palace next month (February) to receive his OBE.

Colin Scott got the award in the Queen’s New Year’s Honours list for services to the community in the Western and Northern Isles.

Colin Scott, who lives in Park House on Matheson Road, Stornoway – the house where he was born – was Sheriff in the Western Isles, Lerwick and Kirkwall from 1992 until his retirement, and was then re-employed part-time until 2014.

He is still a director of counselling and family mediation services in the Western Isles, and honorary president of the Ui Church trust (Urras Eaglais na h-Aoidhe), which cares for the historic site of St Columba's Church in Point.

His 2012 book ‘St Columba’s Ui Church – An Historical Perspective’, is regarded as the definitive work on the historic building.

Speaking to welovestornoway.com this week, he said he had been surprised to be nominated for the honour and still did not know who had put his name forward. He said: “Normally recipients of the OBE are still working and, at 80 years old, I am past the average age, so I was very surprised and very pleased. I don’t know for what role I have been noticed – I have been involved in so many things over the years!”

Among his previous roles, he has been a director at the Harris Tweed Association and chairman of the Western Isles Gallipoli commemoration committee. He’s written two books on aspects of military history, a three-volume work about the Ross Mountain Battery, ‘The Last Warrior Band’, which was published in 2002 and, most recently, ‘Gale Force on Gallipoli’, published in 2015.

He describes as ‘his favourite baby’ at the moment a new competition for primary 7 pupils from schools in Lewis and Harris to encourage them in the use of the Gaelic language. Dìleab an t-Siorraidh (The Sheriff’s Legacy) encourages 12-year-olds to have their fluency in Gaelic assessed via e-Sgoil.

In the first year of the scheme last year, 47 pupils were awarded a prize for their fluent Gaelic which he described as “very well received”.His support for young people is well-known. He ran a platoon of army cadets for some time and arranged trips for them to Hong Kong and Canada, and he was also involved in Operation Raleigh, helping to arrange for young people to help with humanitarian projects in various parts of the globe. In 2016 he presented his family’s Steinway piano to The Nicolson Institute in memory of his mother, Marjorie Tolmie, and his sister, Lois Scott.He said: “When I look back at all I have done I find it hard to believe that I fulfilled all these roles while working. In the Queen’s Silver Jubilee year, for example, I calculated that I was president, chairman or secretary of 27 committees. I don’t know how I fitted it around my job!”Colin Scott was the third generation of his family to have held office in Stornoway. His grandfather, Colin George Mackenzie, was Borough Prosecutor, JP Fiscal and then Procurator Fiscal between 1886 and 1936 and was present at the public inquiry into the Iolaire disaster in February 1919. His father, also Colin Scott (1936-1971) followed on in the same position, meaning that between the three generations they fulfilled civic duties for almost 130 years.Picture shows Colin Scott Mackenzie at the launch of Dìleab an t-Siorraidh in 2018 (e-Sgoil).